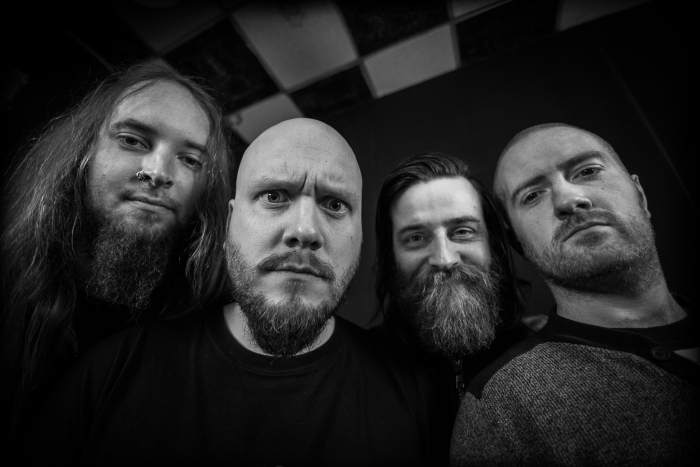 Big praise drenched words and claims have been shared in the build up to the release of the new album from British heavy rockers Boss Keloid, and we can quite eagerly say that Herb Your Enthusiasm more than lives up to every syllable of acclaim offered. The Wigan hailing quartet’s second album is simply superb, inescapably irresistible, and a ravenous incitement entangling the finest ravenous textures of sludge, doom, stoner, progressive rock and much more. For ten tracks it turns ears and imagination inside out with unpredictability and ferocious adventure that catches the breath as equally as the heavy predacious sounds and rabidly dark ideation terrorises the senses. The release is spellbindingly fascinating and destined to stalk the top places of end of year best album lists.

As in debut album The Calming Influence of Teeth of 2013, riffs carry a furious rabidity as rhythms probe and punish within Herb Your Enthusiasm. That alone provides a proposal demanding attention with the seduction of low-slung grooves only increasing the senses intimidating, imagination courting prowess at work. To this masterful palette of raw intensity and barbarous persuasion the band layers further temptations of melodic dissonance and glamour, progressive drama, and at times an avant-garde psychosis which just puts hex on album and listener. The result is a release which blows its impressive predecessor out of the water and announces Boss Keloid as a big creative predator in a large devouring pond.

Recorded and mixed by Chris Fielding at Skyhammer Studios and mastered by James Plotkin, Herb Your Enthusiasm opens up with Lung Mountain, a track swiftly providing the template for the heart of the album. Riffs badger and pounce on ears as the hefty swings of drummer Ste Arands resonate on the senses. It takes little time though for band and album to slip in something more sultrily comfortable as guitarist Paul Swarbrick shares flirtatious melodies cross a calmer landscape where the already rousing roar of vocalist Alex Hurst mellows into a more enticing growl. With Jon Davis of Conan guest and adding to the vocal web, the bass of Adam Swarbrick is all the while a predator, stalking the song and imagination with its swaying animus for a perfect temper to the kinder climate and the spark for more ravenous intent elsewhere. As shown time and time again, there is so much going on in songs only physically embracing them can reveal all with every listen perpetually revealing a new twist or texture to get hooked on.

The progressive ingenuity in the latter stages of the song only adds to a theatre of sound and craft which continues in the imagination fuelled emprise of Haarlem Struggle. An exotic acoustic opening is soon a tempestuous wall of lumbering confrontation, though that early spicing still flavours the bracing proposal of primal intensity aflame with senses enveloping harmonies. Strains of death and groove metal among other bold spices are equally glimpsed in the brewing maelstrom, teasing and thrilling ears though not as much as the subsequent spiral into experimental adventure towards the track’s rear where Boss Keloid conjure an alchemy best described as a bedlam of Faith No More, Trepalium, 6:33, and Destrage.

Giving a final crushing of ears as it leaves, the excellent track makes way for the equally compelling Escapegoat where grunge/stoner toxicity quickly grips and excites whilst vocals and rhythms collude with more tenebrific riffs within an atmospheric trespass. There is no let-up of thick pressure and corrosive intensity across the song, its invigorating voracious intent single minded as its heads into the doom spawned jaws of Cone. Amongst resonating bass bait and dark fibrous grooves, Alex Hurst flirts with a Mike Patton like devilry for his early presence though he and song need little prompting to raise their antagonistic side as heavy rock and thunderous rhythms align for an invasive tsunami of sound and intent. For every assault offered there comes a flirtatious groove or virulent infectiousness that has the body and passions swinging, here it revealing a great Alice In Chains like hue to its tempting.

Axis of Green keeps the release and enjoyment on the same striking plateau, the rhythmic agility of Ste Arands and Adam Swarbrick catching ears in swift time as Paul Swarbrick’s sonic strands and venomous grooves weave in and out. Increasingly more eventful as it progresses, ending with a progressively tenacious and again expectations destroying climax, the song is followed by Highatus, a brief and fiery slice of instrumental sludge suggestiveness which is far more straight forward than the tracks around it but similarly enjoyable before being seriously outshone by Lung Valley. With psych rock keys and the increasingly impressing vocal variety and quality of Alex Hurst instantly sparking further lustful reactions, the track creates a tapestry of grouchily invasive textures and inviting grooves. Every element is as welcoming as they are imposing, and ultimately all addictively persuasive.

The fierce blaze and climactic toning of Elegant Odyssey enslaves next, every groove and slither of ingenuity infesting the psyche as the senses are bruised and body physically nagged by the track’s weight and aggressively shared intent. With its mercurial and spellbinding character, the track is simply outstanding, a ravenous triumph to bear and lustfully embrace, much as the final pairing of songs on the album. Chabal steps forward first, Davis again featuring as another array of textures and rock ‘n’ roll strains entangle and unite as the band forcibly push their songwriting and imagination whilst similarly imposing on the listener, trapping them in a web of contagious exploits and instinctively quarrelsome incitement.

Hot Priest closes up Herb Your Enthusiasm and is as exceptional as its two predecessors. Immediately it flirts with ears in an avant-garde rock shuffle with keys and rhythms sharing off-kilter imagination and enterprise too. Of course in no time, Boss Keloid has uncaged the pugnacious side of their invention with combative riffs and beats led by snarling vocals descending on the senses. From there the two contrasting sides continue to switch within and share the track’s glorious presence.

We have only hinted at the heart, body, and character of Herb Your Enthusiasm such its rich depths and imagination. Your job is to explore it, embrace, it, and be mercilessly buffeted and seduced by something surely few will manage to better this year.

Herb Your Enthusiasm is released April 8th via Black Bow Records and @ https://bosskeloid.bandcamp.com/album/herb-your-enthusiasm