Anti-Clone – The Root Of Man

If asked at the start of the year which was the one release we were most anticipating in 2016 there would have been no pause of thought involved in saying the debut album from UK metallers Anti-Clone. They had us addictively hooked into their own distinct nu-metal bred, psyche twisting sound from the outstanding Hands Sewn Together EP, which had its highly successful national release back in 2014. Its tracks were a regular part of our podcasts too, finding the same eagerness across a horde of other shows and stations with the mainstream media soon waking up to the band’s emergence in turn. Now two years on and quickly following reputation cementing and pushing performances supporting Mushroomhead and Sanguine on certain dates of their recent UK tour, the Boston hailing quintet are poised to unleash The Root Of Man.

The question was never going to be would the album live up to expectations seeded in the last EP and the hefty fuss around the band, that just seemed to be a given in thoughts, but would their music have grown and evolved enough to make them a real contender to stir up the metal scene beyond the UK as earlier songs suggested. Well, the answer is found within the first few tracks of the eleven song incitement alone. Together they give a rousing confirmation with their creative roar, only being forcibly backed by the rest of an album which in some ways continues where the Hands Sewn Together EP left off but immediately shows a craftier and imaginatively more exhilarating, not forgetting broader, weave of styles and flavours in its boldly sculpted songs. The Root Of Man is Anti-Clone on a new mature imagination drenched plateau from songwriting to sound to presentation. There is inventive confidence and fierce adventure at every turn as the scent of inspirations from the forefathers of the nu-metal scene are again embraced, twisted, and honed into openly fresh textures within the band’s own fascinating experimentation. 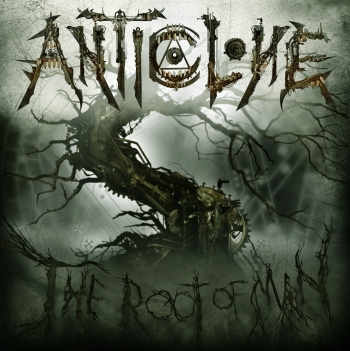 Formed in 2011 but really finding its creative mojo once the current line-up was in place a couple or so years later, the Lincolnshire band soon sparked a hungry and swiftly growing fan base for their dramatically addictive sound which reached its first pinnacle in the Hands Sewn Together EP. Live too, the band has grown to be one of Britain’s prime incitements, sharing stages with the likes of American Head Charge, Kindred, ESO, Breed 77, Sworn Amongst, Maplerun, Evil Scarecrow, and Bloodshot Dawn amongst many along the way. Linking up with EP producer Matt Hyde (Machine Head, Trivium, Fightstar, As I Lay Dying and Slipknot) again for The Root Of Man, the quintet of brothers Drew (drums/ programming) and Peter ‘Mr Clone’ Moore (vocals), Conor (guitar) and Liam Richardson (guitar), and Mike Bradbury (bass) are seemingly poised to set their place at the head table of the UK and indeed European metal scene.

Dually looking at “the beginning of the human race, starting with Eve committing original sin which resulted in us being cast out of Eden” and symbolising the band’s beginning as a band; “These are the roots that we are planting to fully establish ourselves as our own entity, to establish ourselves as Anti-Clone“, the pledge music funded The Root of Man immediately grips ears and imagination with its title track. It is a brief but inescapable lure into the album, an as expected apocalyptically ambience clouded scene setter which is soon crawling portentously over the senses as steely bass and toxic grooves wrap the enjoyably familiar tones of Mr Clone. Its dark tempest rolls straight in to Deracinated which seamlessly draws ears into its own animus of intent and creative rapacity. Straight away an industrial toning merges with the schizophrenic nu-metal prowess which flows from the band, Society 1 meets Mudvayne like essences adding to the imposing character and trespass of the fearsome magnetism on offer. Ebbing and flowing in raw confrontation, the track bewitches ears and stirs up the appetite, setting them in an unfamiliar and disorientating yet welcoming blend of old school aired modern imagination for a seriously rousing slab of predacious incitement.

SwitchBlade growls at and brawls with the senses next, vocals from Mr Clone and the Richardson brothers almost pestilential in their psyche invading animosity as the sounds around them rise and fall with constant inhospitable adventure. Melodic calms and percussive invention are just as potent lures in the agitated imagination and landscape of the song; all colluding to savage and spellbind before A Sight For Sewn Eyes prowls ears with Fear Factory/Spineshank tinged ingenuity. As replicated across the whole of the album, every moment of the song brings greed breeding drama to the listener, Mr Clone showing his clean melodic tones are as fiercely agreeable as the rawer psychosis fuelled side of his vocal character. The song persistently twists and turns from the start before reaching a bedlamic crescendo that never truly departs once erupting as the song leaves on a groove bound web of suggestiveness.

With a constant range of peaks across its landscape as momentous and memorable as the Alps, B9 adds another with its Manson-esque textured slice of predatory heavy metal whilst Twisted Neck entangles ears in the intoxicating vines of toxic grooves which wrap a calmer melody hued serenade beneath a thickly tempestuous and predatory climate of sound and personality. Both tracks present a tapestry of styles and textures, the first also flirting with steampunk like elements where, not for the last time, Anti-Clone have a touch of the now sadly demised Shanklin Freak Show to them. Its successor flirts with a colouring which is more 6:33 meets Dog Fashion Disco though as always, it is hard to pin down a flavour such the Anti-clone ingenuity as they align spices to their own enthralling ideation.

A great punk metal hue seeps into the riveting and mercurial soundscape of Mechanical Heart, the track as welcoming as it is fearsome with sinister keys and avant-garde devilry lining another almost rabid mix of nu and industrial metal carrying at times more than a whisper of death metal to it. Compelling to the extreme, the track simply wants an apocalypse based Hellraiser movie to grace to see its majesty totally fulfilled, though fair to say there is no time to linger in thought with any song during the album as here Feed The Machine steals attention instantly with its vocally anthemic and physically bracing proposal. Repetition in word and sound within the track is a glorious igniting of instincts; that simplicity employed in another rich weave of roving grooves and a cantankerous rhythms skilfully sewn into an irresistibly unpredictable but dramatically galvanic onslaught. Like early Korn in some ways and Slipknot in others, the track still stands distinctively tall as another unique Anti-Clone ravaging of the senses and passions.

ComaSpace brings a moment of relative calm and the chance to catch breath next though unsurprisingly it too has irritability to its tone and dark imposing edge to its atmosphere. Vocally Mr Clone entices ears with a clean delivery as melodies merge acoustic and more aggravated hues into the Deftones spiced offering. Again the band has ears and appetite enthralled, though even being another impressive moment within The Root Of Man, it gets overshadowed a little by Astaroth. The band’s new upcoming single, the song is sonic slavery; the reason mosh pits and lustful reactions were bred into life. As barbarous as anything on the release and the most virulently contagious assault too, the track has everything you need to know about Anti-Clone and whether they are the tonic to your personal musical passions.

Completed by the grisly presence and voice of Sentinel, a sonic inferno of psyche burrowing riffs and grooves amidst an insatiable and concussive tempest of sound and attitude, The Root Of Man is the declaration of a new major force in UK and undoubtedly European metal. Anti-Clone is set to be one of those guiding their journeys over the following years whilst with this superb release, the band has placed themselves right there in stature alongside a great many of those who have inspired their adventure to date.