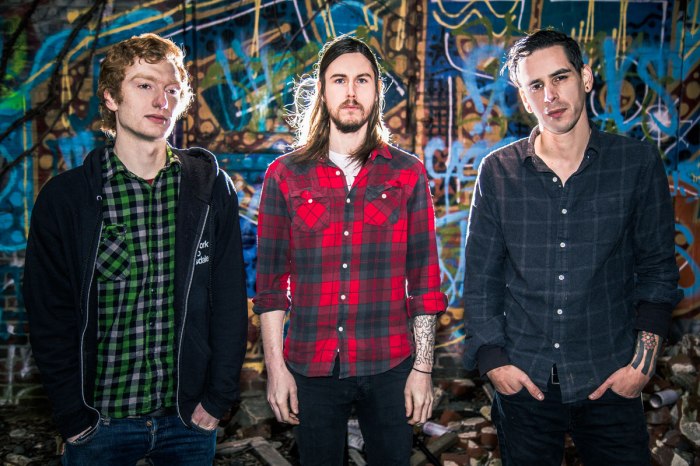 Fresh from a US tour with Grizzlor and on the first step of another American tour, this time with The Glorious Rebellion in celebration of their new album Euphoric, Philadelphia hailing Bardus have their own slice of sonic delight being uncaged courtesy of Solar Flare Records. Released the April 1st, the opening date of the tour, Stella Porta is a rich and uncompromising seven track maelstrom of sludge, grunge, noise, and psych rock forcibly showing exactly why so many people are making vocal fuss about the trio.

Formed in 2011, Bardus quickly showed that their sound and songs was never going to settle into one style or predictable design. Their self-released debut album Solus in 2013 proved that; its well-received uncaging the spark to a growing reputation built and pushed by the band’s DIY intent and live presence which has seen them regularly tour and share stages with numerous national acts. As Stella Porta infests the senses, it feels like it just might be the wake-up all to those yet to be challenged and persuaded by the band’s vociferously intrusive sound. If that is not to be, it is certainly a potent and impressive step to grow that success from.

The album starts with the voraciously compelling Smoke Bath, a track which instantly grips ears and appetite with the controlled stroll of Kyle Pierce’s beats and the grouchily infectious growl of Ari Rosenberg’s bass. Soon it is awash with the caustic strokes and sonic animosity of guitar, Justin Tuck casting an invasive web of discord fuelled drama matched by his raw throated vocal squalls and angst. It is a gripping start to the release, noise and punk drenched rock ‘n’ roll with thick anthemic prowess stirring up imagination and passions ready for the equally rousing exploits of Monolith. As with the first song, there is a touch of label stable mates Sofy Major and the likes of Unsane to the track but every impacting swing and raw sonic trespass only reveals a voice and character unique to Bardus; those essences of familiarity merging with fascinatingly fresh and beguiling imagination.

Sky King backs that up with its opening sonic mist offering a recognisable air but soon igniting into a furious punk ‘n’ roll tango with flirtatious rhythms and an addictive hook alongside a senses scarring vocal attack within a noise infested tempest of blistering intensity and ever shifting enterprise. Irresistible in its unbridled rampage and evocatively intrusive in its calmer inhospitality, the song incites fresh urges of  hunger in an already eager appetite before the thicker doomy atmospherics of Transcendence wrap a sludgy, bordering on funereal, canvas of suggestiveness. There is venomous vitriol and intimidating portentousness to its enveloping animus though which incites a lively almost rancorous energy to the track.

Living up to its name, Haze provides an opening raw embrace which sonically drifts and evocatively lies on ears, enveloping the listener as clean vocals align with an infectiously inviting and melodically distorted passage of calmer flirtation. As expected it is soon ablaze though, ferocious vocal discontent and sonic dissonance drenching song and recipient before rotating between the two extremes for another keenly favourite moment of Stella Porta to which the Melvin-esque Oracle creates a matching pinnacle with its own abrasive rock ‘n’ roll with ire stained vocals and an insatiable virulence in hooks and spicy grooves. As everywhere upon the album, there is theatre to the songwriting and its inventive portrayal which fuels a web of intrigue and imagination which right here is unafraid to involve surf and psych rock seducing in a tempest of belligerent noise and intent.

Clandestine brings the release to a jaundiced yet inescapably bewitching grudge of a close, guitars and voice the corrosive roar around the more controlled but no less impacting rhythmic predation offered. Though maybe not quite igniting the passions as many of its predecessors, it is a fine to an excellent intrusion on body and emotions.

Like so many albums recently, Stella Porta takes its time to rise to its full creative height but as many, each play only enhances its qualities and irresistible persuasion to show why Bardus is becoming a favourite challenging flavour for a great many.

Like Loading...
‹ The Bendal Interlude – Reign of the Unblinking Eye
Fortunato – Black Laces (What Are You Waiting For) ›