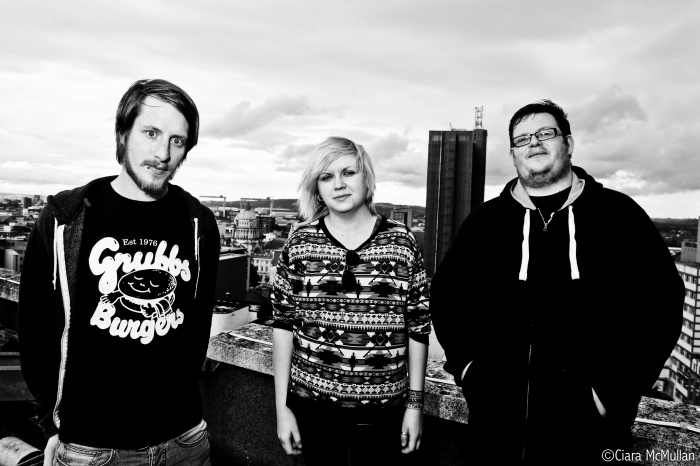 We all like a bit of teasing before being seduced, a touch of flirting before getting fully involved in a lustful union and that is exactly what the songs within Shenanagrams do. The debut album from British math/alternative rock trio Bear Makes Ninja, it is a collection of tracks which offer a variety of off-kilter and imaginative bait which lures and entices before leading ears and imagination into feisty sonic revelry.

The Sleaford in Lincolnshire hailing, 2010 formed, threesome of James Palmer, Ben Kutzner, and Karina Lawrence are no strangers to attention and lusty praise thanks to a previous pair of EPs in If We Were Cats of 2010 and Shouting at Bridges two years later, as well as a compelling and dynamic live presence which has taken in the sharing of stages with the likes of Mutiny On The Bounty, Cleft, Axis Of, Alpha Male Tea Party, The Wyches, Axes, and Alright The Captain amongst many over time. The band has also made very well-received appearances at festivals such as Arc Tan Gent, BBC Introducing, So Festival, Hockey Hustle and Airfield Anarchy. Fair to say they have welcomed plenty of praise over time but now they are ready to create their biggest stir yet with Shenanagrams, an encounter which has body and imagination on board from its first tenacious moments.

The contagious instrumental Double Twice gets things off and rocking first, guitar and bass riffs colluding from its first breath to nag and entwines the senses as bolder rhythms brew behind them. Once into its full stride, irresistible hooks spear and vein a muggy but no less vibrant climate of sonic enterprise and captivating temptation. There is a Buzzcocks-esque hue to those hooks and the wandering melodic spicery whilst the heart of the track becomes increasingly volatile and feistier over time to complete the inimitable tempting of body and spirit. 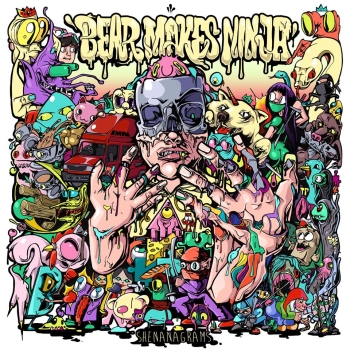 A virulently gripping start to the album, it is magnetically backed up by Aches and Veins. A less agitated encounter to its predecessor but no lightweight on math rock ingenuity as skittish rhythms link up with jazzier flirtations of guitar and bass, the song also brews its own slightly tempestuous crescendos of energy and drama. Like The Fall of Troy meets Young Knives, ears and feet are gripped in no time then passed over to the similarly explosive and virulent Bob’s Logs. Again the just mentioned Leicestershire trio come to mind, they the most regular hint we can use to the creative tapestry spun by Bear Makes Ninja across Shenanagrams. The three pronged vocal persuasion is especially alluring in the third track, radiating with character and harmonic charm from within the at times thickly busy climate of the track.

B.F.C (Banned from Chicken) bounces around with stabbing hooks and eccentric rhythms next, every second of the track creative drama which, as the album, only intrigues, reveals, and impresses more with every listen. The same of course applies to the funk loaded shuffle of I Ditch Girls Who Believe in Ghosts, another hip manipulating, enjoyment installing instrumental, whilst 12345, from a celestial ambience smothered entrance, evolves into a vivacious swirl of sinew sculpted grooves and sonic intensity which storm over the senses whilst treating them to acidic hooks and racy melodic flames. Ebbing and flowing in energy, the song alone triggers another urge of greed to an already eager appetite for the album.

These Little Snakes is a more even mannered proposal, though just as frisky with its robust pop rock conjuring of rapacious invention. The burst of kinetic sound and intensity which blesses all tracks has, as here, a certain Reuben like quality, if without the predacious snarl of the still missed UK band. It is a quality which only adds to the experience and enjoyment though, as echoed in the closing roar of the album’s title track. Shenanagrams song and full-length is a bracingly animated incitement of body and spirit, its snaky grooves like wandering hands fondling the imagination as rhythms swing hips and vocals spark another host of eager involvement.

Exploring fresh post/noise rock hues too, the track is a masterful end to a thoroughly fascinating and rousing release. Shenanagrams is the announcement of a fresh creative devil in the British rock scene; the realisation of the hints and promise laid in Bear Makes Ninja’s previous encounters but more so the opening of a new depth of imagination and inventive fun within the band.

Shenanagrams is out now on CD, Vinyl, and digitally via Mountains Of Records @ http://bearmakesninja.bandcamp.com/

European Tour With Alright The Captain: