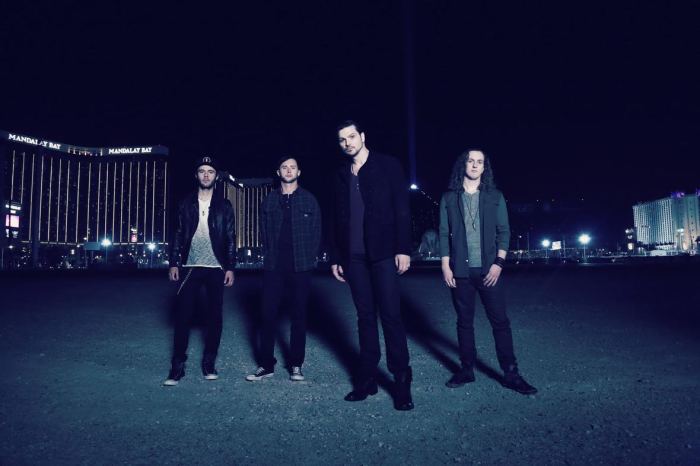 Adelitas Way has persistently shown themselves capable of writing and creating anthemic roars that instinctively ignite the spirit and adrenaline. From their self-titled debut album and tracks like Invincible, the US band has early on uncaged impassioned and dynamically persuasive proposals. With new album Getaway though, they have hit a new peak. From start to finish, it is a conveyor belt of rousing proposals, as sturdy and aggressive as they are melodically contagious. It is probably fair to say that the Adelitas Way sound has never been one close to re-inventing the wheel, but they and certainly these ears have no issue when body and spirit is relentlessly given a shot of the band’s fresh and anthemic virulence.

Getaway is the fourth album from the 2006 band, and as suggested another in a line of highly persuasive and captivating releases. Whether they have hit the personal sweet spot or not, all have gone to establish the Las Vegas quartet as one eagerly devoured proposition on record and indeed live where they have shared stages with the likes of Guns N’ Roses, Shinedown, Creed, Alter Bridge, Three Days Grace, Chevelle, Theory of a Deadman, Breaking Benjamin, The Pretty Reckless, Godsmack, Staind, Flyleaf and many more.

The successor to Stuck of 2013, the Johnny K (Disturbed, Staind) produced Getaway sees the foursome of Rick DeJesus, Tre Stafford, Robert Zakaryan, and Andrew Cushing in no mood to hold back on their emotive intensity and sonic dexterity. The evidence is immediate as the band’s new single Bad Reputation, and first taken from the album, launches at ears with infectious bait. Choppy riffs and similarly tempting rhythms immediately press suggestively upon the senses as the always welcome tones of vocalist DeJesus step forward. Inspired by his own feelings about a reputation he has earned over the past few years, his reflections come entangled in a web of spicy melodies and snapping hooks within a climate of sound which builds small but effective crescendos of energy and intensity.

It is a great start which barely waivers over the next stretch of songs starting with the album’s title track. The band’s hard rock bred sound is in feisty mood from its first breath, almost irritable in its sonic jangle backed by attitude lined rhythms. Increasingly fiery yet equally catchy, especially around its sizzling chorus, the track has feet and emotions quickly involved and in time exhausted, though they get a chance to relax with the sultry smoulder of Good Die Young. The fiercely energetic tracks always emerge as personal favourites across an Adelitas Way encounter but as proven here, the band is very accomplished at creating emotively and sonically incisive balladry. Expectantly it does come with a raw edge and dramatic intensity which only helps it make a potent impact as enjoyment flies high.

Low brings a great grouchiness to its riffs and nature next, guitars almost carnivorous in tone as a Sick Puppies like flame of melodic and harmonic energy emerges from within the song’s growl. As many tracks, ears feel like they are meeting up with an old friend, being enveloped in a recognisable infectiousness which adds colour to the band’s blaze of heavily pleasing and fresh enterprise. By the end of the first minute, vocal participation is inevitable, a temptation most tracks are equipped with as shown by the volatile roar of Put You in Place with its web of spidery steely grooves and the mercilessly contagious I Get Around. A resonating bassline invitingly groans from the heart of the second of the pair, its dark hues a gripping tempering and spark to the tempestuous and boisterous roar around it. Not alone in showering the senses in serious infectiousness, the song epitomises the power, attitude, and rousing ferocity of the band’s sound, and equally its rock pop prowess.

Across the tenaciously excitable Filthy Heart with its blues spiced sonic winery and the mellower coaxing of Harbor the Fugitive, band and album, maybe without matching earlier heights, has ears and firmly attentive whilst Sometimes You’re Meant to Get Used really stirs things up again with its tantalising blend of rapaciously snarling textures and melodic revelry bound in emphatically infectious imagination.

The album concludes with firstly the blues rock flavoured Shame, an enticing flame of enterprise which again might not create the same lustful reactions as others but with a whiff of Bowie-esque toning to parts of the vocals, only holds attention firm before Deserve This twists and turns with robust rhythms and crunchy riffery leading its fractious yet anthemically layered tapestry of striking sound and endeavour.

It is a fine end to a thoroughly enjoyable release where major surprises are low but invigorating rock ‘n’ roll is nonstop incitement. Getaway is the most rounded and fertile release from Adelitas Way, and for us, the most fiercely enjoyable so far.

Getaway is out now via most online stores and @ http://adelitaswayshop.bigcartel.com/category/cd