The Jade Assembly – Nothing Changes

For us one of last year’s most rousing and emotionally charged singles was One Last Time from UK rock band The Jade Assembly. It is an encounter which still ignites a shiver of excitement when playing in ears ten or so months on. Now the Bolton hailing quartet has its successor, Nothing Changes lined up to build upon the successor of its predecessor.

It is fair to say that buzz around The Jade Assembly has been an on-going rising since they emerged in 2012, but the past twelve months have pushed the band to the fore of a whole new strength of attention thanks to One Last Time and a live presence which only fires up their reputation each and every time. Combined with the depth of variety to their sound and songwriting, it has led to the likes of Clint Boon of Inspiral Carpets describing The Jade Assembly as the ”Best Guitar band since Kasabian.” 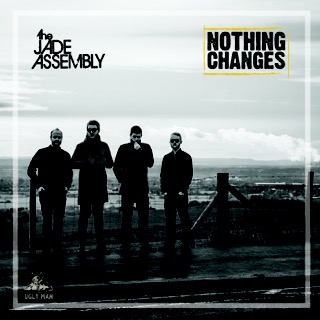 Nothing Changes shows more of that wide vein of adventure in the band’s creativity; the song not quite the anthemically forceful kaleidoscope of intensity and emotion fuelled crescendos that shaped One Last Time, but a similarly pungent weave of elegant melodies and tenacious textures aligned to enjoyably imposing rhythms and the expected mesmeric vocal persuasion of vocalist/guitarist John Foster. From the first gentle tingle of melodic guitar, band and song has attention in hand, only tightening the grip as Foster’s heartfelt tones and words emerge in the hug of his and Gareth Smedley’s guitar enterprise. All the while a darker shadowing courts the matching tone within the lyrics, Danny Hayes’s bass strings colluding with the dynamic swipes of drummer Andy Watson as contrasting textures masterfully unite.

The senses and emotions rousing prowess of that earlier single is unsurprisingly also a quality of Nothing Changes if to less dramatic effect across the whole song. Its crescendo of a finale though is one invigorating roar leaving a lingering persuasion in its wake as another single from the band reveals itself a memorable moment.

Accompanying the song is the acoustic croon of Or Somat; a serenade of beguiling voice and emotive guitar which hold ears and thoughts in a firm hold with the qualities of the band inescapable.

Last year was a big one for The Jade Assembly, in many ways thanks to their single and 2016 looks like it will be much the same if the rather enjoyable Nothing Changes can and should, spark the same keen interest.

Nothing Changes is released February 29th on all major music download platforms.