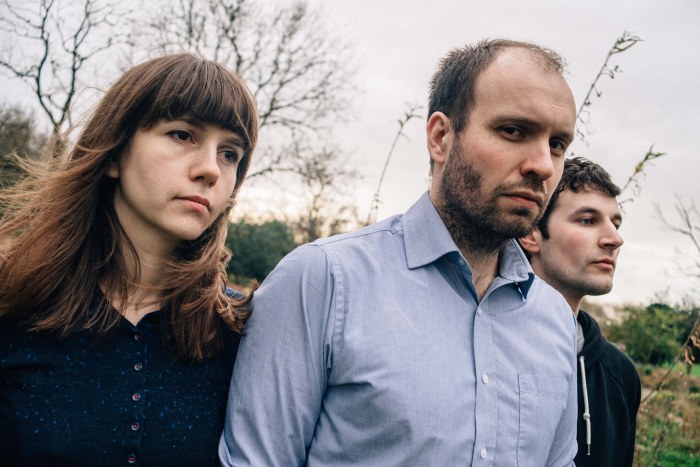 Of the albums most anticipated by our particular ears was one from UK duo Witching Waves. They had us on line with their ltd edition cassette Concrete/Chain Of Command in 2014 and inescapably hooked with debut album Fear Of Falling Down later that same year but things have just got contagiously fiercer and even more sonically fascinating courtesy of their second full-length Crystal Café. It is a stunning roar of sonic and emotional dissonance fuelled by cutting hooks and feverish melodies, and that is not to forget the ever darkly mesmeric and often challenging lure of the vocals.

A mix of corrupted psych and surf rock fever with punk and post punk attitude, the Witching Waves’ sound mighty be better suggested by casting it as a union of the punk antagonism of The Raincoats and the garage punk ‘n’ roll devilry of The Creeping Ivies in collusion with the raw and virulent off-kilter pop of The Adult Net , Morningwood, and Delta 5. To be truthful, the London band has a sound which has always been its own individual but now forcibly so on Crystal Café. Intrigue for what the band will reveal next is always company to eager anticipation and indeed expectations, and it was no exception this time around, especially with the duo of founding members, vocalist/guitarist Mark Jaspar and vocalist Emma Wigham, having grown by one with the addition of bassist Ed Shellard since that previous impressive album.

Crystal Café opens up with Twister, a song shedding drama with its first surge of guitar. As it hits a heady stride with scything beats lining the brooding bassline of Shellard, the track has ears and imagination onside with ease, even more so as the siren like tones of Wigham collude with Jaspar’s sonic tendrils, all hot spice and raw flirtation. Not for the last time, a scent of The Cure certainly hits the rhythmic side of a song, adding appealing hues which engagingly merge with the fiery enterprise of guitar and voice.

The outstanding start continues in the concussively seductive Seeing Double, a roar of scuzzy guitar and alluring vocals with a sniff of almost Xmal Deutschland like post punk coldness. It is a grouchy encounter, epitomised by Jaspar’s aggressive vocal outbursts, but simultaneously also a raw melodic enticement which simply grips the imagination.

The following Pitiless uncages an anthemic rumble of rhythms as Wigham’s captivating vocals get entangled in the citric lines of just as compelling guitar spawned imagination. Juicy hooks are as frequent as searing sonic endeavour, being caught up in a bracing infectiousness which has the body jerking and senses wilting, though they do get respite from the alluring repetition sculpted instrumental Red Light Loop that follows. It is the first of a few imagination sparking interludes, a break before the raw trespass of contagion continues, in this case with Make It Up. There is a Wire like quality to the song which only adds to the pop catchy theatre that evolves to seriously excite and involve the listener. The track is as irresistible as a fondle in the shadows; offering a warm moment of pop slavery in the senses whilst they get intruded upon by the dissonance soaked soundscape of the album.

Anemone spreads a portentously melancholic instrumental breeze next, its starkly lit prowl a rising smog of discord as invasive as it is intimidatingly bewitching. The track sets up ears and imagination for The Threat, it a melodically cultured temper to the previous trespass with its boisterous surges of muscular beats and flowing vocal warmth over less kind but as riveting grooves. It too brews into a swarming sonic assault but without losing any of the pungent temptation it began coaxing ears with before the brazen temptress that is the excellent Red Light wraps its raw hunger and salacious beauty all over the listener.

The scathing sonic air and vocal angst of Receiver then takes over, its Jaspar voiced tempest bold exploration of the senses with underlying seduction added by the harmonies of Wigham, whilst after its pleasing encroachment and the evocative caress of instrumental Inoa, the album comes to a mighty close with new single Flowers. Wrapping around a glorious bassline echoing early Cure as crisp beats descend with resonating effect, strings of melodies and atmospheric suggestiveness come together, in turn swiftly joined by a dual smooch of vocals to captivate and entrance to which Wigham further adds her spellbinding lures. As seductive and inviting as it is, the track equally offers a host of descriptive shadows and sonic discordance that fester in thoughts and emotions to fine effect.

The track is an enthralling end to a simply superb release; another from Witching Waves and easily their finest moment yet. Hopefully this time around, the band gets the attention and surge of fresh appetites for their unique sound which previous releases warranted but Crystal Café demands and deserves.

Crystal Café is available on vinyl, cassette, and digital download from released February 26th via Soft Power in the UK and HHBTM Records in the USA.