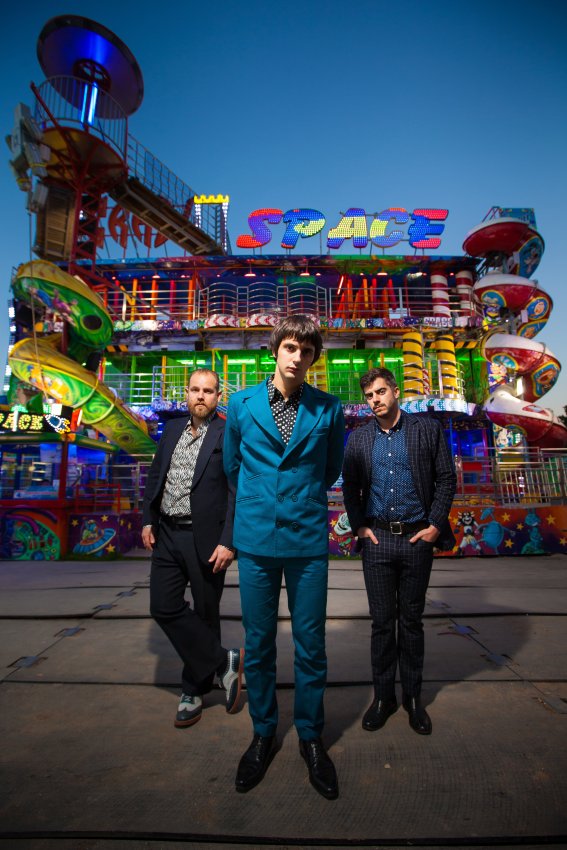 Wondering how to spend the weekend to its fullest enjoyment? How about filling your home with suitable alcohol, inviting a horde of friends over, and turning the speakers high as the new album from Fuzzy Vox provides a party to remember. I should warn that weak hips will be put under serious stress in this pursuit of fun because No Landing Plan is one of the most energetically feverish and tenaciously insatiable incitements to hit ears and bodies in quite a while. A collection of songs bred on garage rock and power pop, the French band’s second album is pure rock ‘n’ roll virulence with a character as varied and demanding as the medical bills received after it has seduced bodies to exhaustion.

Hailing from Joinville le Pont, Fuzzy Vox is the devilment of vocalist/guitarist Hugo Fabbri, bassist Greg Dessons, and drummer Nico Maïa. Emerging in 2011, the band quickly awoke national ears with the release of first EP, Technicolor in the October of 2012, breaching broader attention with debut album On Heat early 2014. The past couple of years have been especially lively and successful for the trio; tours all over Europe building on the success of their album with a recent adventure alongside Jim Jones Revue & Thee Vicars one particular highlight. Fuelled by the punk DIY ethic which again sees their latest encounter a self-released proposition, Fuzzy Vox is now ready to dive into major spotlights wherever they can be found, and with No Landing Plan as their key, betting against the band hitting new peaks of attention to match the plateau set by the album is pointless.

Recorded in Los Angeles last summer with Andy Brohard and Ryan Castle (Primal Scream, Black Angels), who also mixed the album, No Landing Plan gets straight to devilish work with opener Explosion Of Love. From the first slither of feedback a sense of mischief is a foot, and quickly playing with ears as jabbing beats join a web of temptation cast by guitar with the bass in swift seductive union. Hugo’s vocals alone show the energy and passion running eagerly through the song and sound, hooks and choppy riffs building on it with their own addictive dexterity. 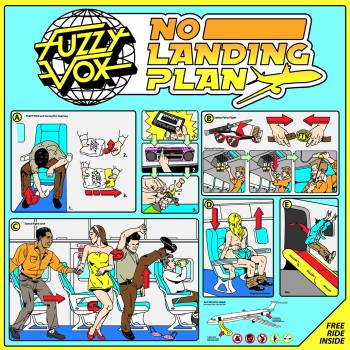 It is a rousing start eclipsed by the following Distracted. The garage rock of its predecessor takes a more sixties scent in the second song, The Stones an easy clue which unites with a more Hives like tenacity as the track blossoms its anthemic adventure. Again feet and hips are as much a blur of involvement as ears and appetite are hungry recipients of the increasingly dynamic mesh of contagious sound and sonic bait.

With Told You Before taking little time to stir limbs into action with its punk rock/power pop shenanigans, the album has body and soul lock ‘n’ loaded in its high octane revelry. Wiry grooves and melodic flames only add to the imagination’s subservience and remember that mention of exhaustion? Already the signs are there barely three songs in.

That variety in sound is also pushing through by now too, the scintillating Grow Evil exploring a lively rock pop prowl with a touch of The Jam meets The Dirtbombs to its almost carnal temptation whilst I Got A Girl bounces around in a power pop stomp drawn from both the sixties and seventies take on the infectious flavour. Both tracks are superb but outshone by the jagged rock ‘n’ roll of Bo Diddley, a song living up to the sound its title suggests whilst creating a catchy incitement of viral proportions.

The Jam comes to mind again as Don’t Leave Me Behind steps up next with its melodic rock ‘n’ roll, equally though, so does an open Elvis Costello inspiration. It is a blend when woven into the band’s own invention simply sparks up further keen endeavour with and within the track, and indeed Charlie once it takes over with its R&B laced pop romp. As easy as it is to get entangled and absorbed by the carnival of sound, lyrically the songs within No Landing Plan are just as potent and impacting, Charlie especially striking. That diversity of sound is also in full swing within the song alone, a float through crystalline ambience following a thrilling surge of Oliver’s Army spiced devilment, leading to another anthemic whipping up of feet and emotions.

Easy Street frolics in ears next with a swinging festivity of sound and voice whilst teasing like something akin to a pop punk version of Supergrass whilst A Reason To Love leaves the listener in the throes of ardour for its surf rock coated, rockabilly bloomed slice of punk ‘n’ roll carrying flames of Living End/Tiger Army in its imagination. As an example applying across the whole album, for the references offered they are mere clues to the Fuzzy Vox uniqueness which fuels all tracks to gripping success.

So get those dancing shoes on and corks popped because Fussy Vox has one memorable weekend, indeed any moment in time you wish, ready and waiting courtesy of No Landing Plan.

No Landing Plan is available from February 26th  from most online stores.