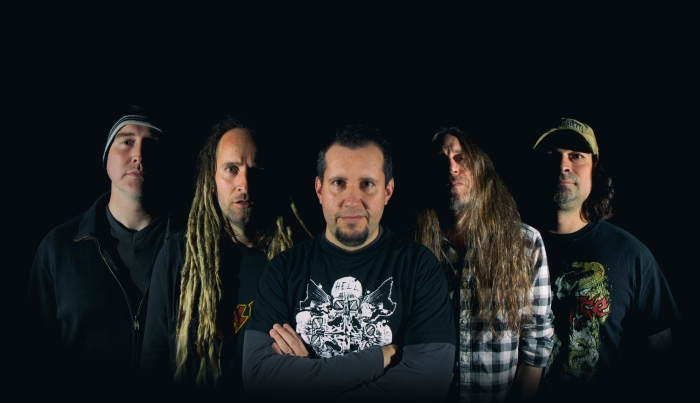 Creating a bruising and boozy riot of rapacious rock ‘n’ roll, Canadian quintet Buffalo Theory MTL are releasing their latest uproar of sound and attitude this month in the boisterously muscular shape of Skeptic Knight. The five-track EP is a roar of debaucherous intent amidst heavy cantankerous sound which, without any major surprises, simply gets you in the mood to feverishly brawl and party.

Hailing from Montreal MTL consists of guitarists Pat Gordon and Yannick Pilon of Vantablack Warship, bassist Gary Lyons, drummer Brian Craig, and vocalist veteran Anton Parr. Between them, they have been part of very well-known Quebec groups such as the Ghoulunatics, Les Ékorchés, and Arseniq 33 whilst Parr’s history includes playing in thrash bands in Brazil. Together they brew a thick and predatory breed of stoner metal infused with thrash fury; a sound which, since the band formed in 2009, has fuelled an early demo followed by debut album Heavy Ride in 2012 and two years later, the Murder Trilogy EP. Both have been well-received proposals backed by a live hunger which has seen the band share stages with the likes of The Atomic Bitchwax, The Naked High, Diamond Head, Skull Fist, Thor, Misery Index, BARF, Insurrection, Iron Giant, Tunguska Mammoth, and many more.

Mastered and mixed by Peter Edwards, Skeptic Knight is Buffalo Theory MTL in full adrenaline pumped, rock ‘n’ roll embracing, voraciousness which Lyons describes as “…our best material to date and it’s damn heavy as usual”, adding “ It has a different sounding production that we like a lot. We completed 5 songs for the release. There were lots of riffs just waiting to be completed and it was hard to choose which ones to release first as we are already prepared to unleash another EP by next year to follow it. We always prefer to gather a few good songs and go into the studio being ready to release something new more often, rather than waiting too long for a LP type of setup with 10+ songs.” 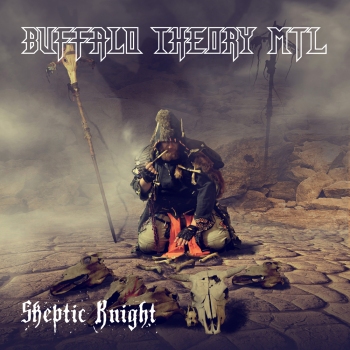 Of course proof of word and success is always in the eating of the pudding and there is no doubting that opener Conspiracy in Paranoland alone is one tasty incitement of new yet prime Buffalo Theory MTL rampaging for ears and appetite to devour. A track knocking around since the band’s early days, it comes built on ravenous riffs, scything rhythms, and a prowling growling bassline to get lustful over. The song initially appears as a proposal just to have a rousing time with but it is soon showing itself a predator. The guitars offer a predacious flirtation led by the boisterous raw tone and vocal delivery of Parr but tempered with spicy grooves and a great guitar and bass nagging which simply helps whip up lustful enjoyment.

The following Punishment is an equally invasive character but centred round an even more bruising thrash seeded ferociousness, a fury bound in acidic grooves and vocal hostility with Pilon potently backing the roar of Parr. With a Pantera/Down like causticity and virulence to grooves and vocals alone, the song romps and stomps with the passions before Get On It swings its sinew sculpted hips as rebellious attitude colludes with bad-blooded rhythms entangled in psyche trespassing grooves. In contrast though, vocals and hooks breed their own more merciful strong anthemic persuasion, adding to devilry to get eagerly involved in whilst being battered around the senses.

The EP’s title track comes next, instantly showing the heaviest presence and thickest web of invasive textures heard yet on the release. It makes a slow, almost lumbering, bestial entrance, relaxes then breaks into a groove infested canter which has body and imagination on board within a mere handful of seconds. That instinctive enticing is helped by the spiciness coating grooves and the arousing impact of the riff driven rabidity which consumes the senses. It is a sonic war machine in hungry motion, the kind of inescapable protagonist which refuses anything less than full involvement in its roar, much like Psychic Enclosure. Like Rage Against The Machine meets Black Sabbath meets Sleep, the closing track riles up and rages against the senses whilst uncaging an imposing contagion of flesh searing grooves and corrosive riffery stalking by merciless rhythms.

It is a fine end to a thunderous encounter leaving ears and pleasure full. Skeptic Knight is heavy duty rock ‘n’ roll to be intimidated by and greedily feast upon. Uniqueness is maybe rare but enjoyment is unrestrained; a proposal few can turn down.

The Skeptic Knight EP is available via Stand Records from February 26th @ https://buffalotheorymtl.bandcamp.com/album/skeptic-knight