Black Coast – Crows Of The North

Good things are openly being spoken about Black Coast and their metal/hardcore ferocity, praise that is easy to expect continuing as their debut EP, Crows Of The North, hits ears. The five track fury is a potent introduction, a powerful announcement of their arrival on the British metal scene with its melodic prowess within a commanding tempest of aggression and sonic animosity.

Formed in 2015, Black Coast is a band which is still looking for the uniqueness within their sound and it is fair to say that Crows Of The North provides few major surprises, yet it equally offers strong and open potential which certainly draws attention to itself. For a first release, the EP is a noticeably accomplished and carefully honed affair revealing that the Stoke-on-Trent quintet already has a good handle in equipping raging tempests with contagious hooks and suggestive melodies. They are qualities which have lured interest from the likes of Rock Sound and Alex Baker for his Fresh Blood show on Kerrang!, and will soon help the band in stand out within a crowded metalcore/hardcore fuelled scene.

Crows Of The North gets off to a bang with new single and best track on the EP, Violence Reigns. From its first breath, sinew sprung grooves are entwining ears with their enticement backed by heavy beats and the groaning lure of bass. Almost as swiftly, the vocal squalls of Charlie Hewitt unite with the adventurous sonic enterprise cast by guitarists Scott Pinnington and Joe Mayer, his entrance seemingly the spark to a great shift into unpredictable and an evolving landscape of sound and imagination. From vocals to hooks, rhythms to intensity, the track becomes a tapestry of maybe familiar but attention exciting flavours, persistently twisting and turning to incite an early keen appetite. 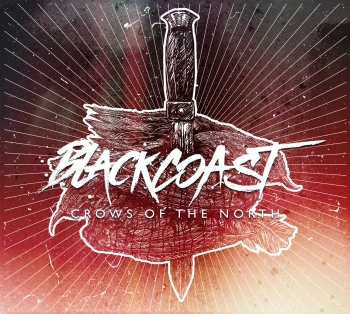 The great start is nicely, or should that be grudgingly, backed by the irritable predation and antagonism of Mercenary, a track which blossoms into something between The Ghost of a Thousand and While She Sleeps. Swinging grooves quickly ignite ears whilst the intrusive strikes of drummer Matt Clarke seem to punctuate the turbulent emotion of Hewitt’s caustic vocal enterprise. Courted by a more ‘reserved’ trespass uncaged by Jack Beardsall’s bass and an infestation of swirling grooves and acidic hooks, the song leaves satisfaction ripe. Its pleasing success is then matched by the similarly intensive sonic and emotive inferno of Plagues where again grooves easily infiltrate the imagination whilst the broader melodic climate which comes and goes shows more of the invention and adventure lying within the songwriting and desire to merge sounds and contrasts. It does lack the same incendiary spark as the first pair of tracks though, being fully pleasing without drawing that extra excitement even if it has definite moments where riffs and anthemic rabidity, especially in its finale, hits the spot rather nicely.

Habit is the same, a track which does little wrong but misses the ingredient, even with its excellently crafted animus of emotion and sound, that helps turn a good song into a great proposal. Again though, it has to be said that it reveals creative incidents which only suggest that Black Coast is moving in the right and potent direction to be a notable antagonist in British metal ahead.

The EP’s title track closes Crows Of The North off; its attitude driven concentration of belligerent intensity and sonic tenacity highly captivating especially when bound to searing yet inviting grooves and barbarous rhythmic confrontation. Ultimately breaking into a bruising punk ‘n’ roll stroll clad in metallic ferocity, the track provides a thoroughly satisfying end to a fine first look at Black Coast.

Originality is maybe scarce within Crows Of The North but imagination and the sparks of future individuality make for a promise which time will see realised or not. Finding out should be an enjoyable adventure with Black Coast though just as the EP is now.

The self-released Crows Of The North EP is available from February 26th through iTunes and other stores.

Tags: Black Coast, Crows Of The North, hardcore, Metal, Metalcore, RingMaster Review, The Ghost Of A Thousand, While She Sleeps