Not so much a super group but a collective of irresistible talent, Supersonic Blues Machine release their debut album, West of Flushing South of Frisco, this February and a collection of blues fuelled tracks which leave ears glowing with satisfaction. Centred around the trio of bassist/producer Fabrizio Grossi, guitarist/singer Lance Lopez, and drummer Kenny Aronoff, band and release provide a tapestry of craft and heart fuelled enterprise which, even if blues is not the prime source of your musical tastes, simply stirs up an eager appetite with its tenacious rock ‘n’ roll.

The beginnings of the band began in 2012 with Lopez, when planning a visit to Los Angeles to record a new album, arranging to hook up with Grossi, who has worked with some of the finest musicians from Steve Vai to Tina Arena, Nina Hagen to Alice Cooper as well as Glenn Hughes, Dave Navarro, George Clinton, Joe Bonamassa, Leslie West, Zakk Wylde, Ice T, Slash, and Paul Stanley to name a few. Their plan to knock around new ideas led to a trio of tracks which became the foundation of an exciting new project to which ZZ Top’s Billy F. Gibbons added fuel to the creative fire by suggesting the pair, who he both knew, “should seriously consider working on something together.” Aronoff who has worked with the likes of John Mellencamp, Smashing Pumpkins, Meat Loaf, Brandon Flowers, John Fogerty, Red Hot Chili Peppers and Joe Cocker, was then subsequently recruited, thanks to Toto’s Steve Lukather, to complete the heart of the new adventure.

Rushing forward to now and it is fair to say that West of Flushing South of Frisco is already making a stir from the glimpses of tracks offered as teasers and from the band of musical brothers brought in to give each song its individual and impressive character of sound and persuasion. It opens up with Miracle Man and a coaxing caress of acoustic guitar aligned to enticing sonic tendrils around sand textured vocals. Those sultry strands of blues guitar continue to wind around the moodier tones of bass and the great grain textured vocals of Lopez, even as an infectious saunter breaks free from the more reserved start to lead feet and hips into an eager southern spiced jaunt around the dance-floor. 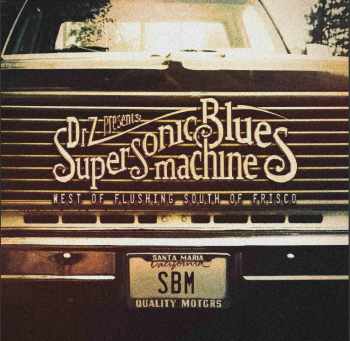 It is a great start more than backed by I Ain’t Fallin’ Again with its punchy rhythms and climactic air of wiry grooves and spicy enterprise. As the first, it too develops an infectious canter which easily coaxes involvement in its anthemic funk lined revelry and continues the album’s rousing star before Running Whiskey turns up the heat again with its rock ‘n’ roll blaze. Featuring Billy F. Gibbons, the song aligns shimmering keys with classic rock ‘n’ roll with a very gentle scent of Thin Lizzy to it.

Remedy mellows the adrenaline running through veins next, though the song with Warren Haynes (Gov’t Mule/Allman Bros Band) adding his provocative craft has ears and enjoyment firmly gripped with its smouldering Americana. Fair to say though, it is quickly replaced in the attention of personal tastes by the outstanding Bone Bucket Blues. Gnarly and cantankerous in riffs alone, the track is a liquor scented stomp with the vocals of Lopez as much galvanic bait as the feverish grooves and tenaciously writhing textures around them. It is led by a brooding bassline which reoccurs in a less imposing manner within the emotive croon of Let It Be. Even within is sweltering climate of emotional intensity, the song has a sway and infectious manner that makes easy pickings of ears.

Equally as fiery and expressive in word and sonic invention is next up That’s My Way with Chris Duarte joining the trio for its catchy rock ‘n’ blues persuasion whilst Ain’t No Love (In The Heart Of The City) is a tantalising engaging cover of the Bobby ‘Blue’ Bland classic. Smoky in air, galvanic in a group loaded chorus, it is easy to suspect that the song has an emotional involvement with one or more of the trio such its impassioned rendering, though that kind of potency is fuel to the album as a whole and in evidence within the Eric Gales enhanced Nightmares And Dreams. Inspired by a dream, the song is a haunting yet inviting roar of voice and emotion draped in the guitar imagination which veins the whole of the album in an array of stirring tapestries.

Walter Trout brings his distinct touch to the lingering temptation of Can’t Take It No More where the pairing of Lopez and Trout‘s vocals alone are worth the price if the ticket whilst after Whiskey Time, a spicy track described as the extended ending to earlier proposal Running Whiskey, the mellow charm of Let’s Call It A Day sees Robben Ford helping create a piano led, guitar shaped serenade which provocatively smooches with ears with a gentle and at times more intensive touch.

Closing with the funky throes of Watchagonnado, the Supersonic Blues Machine debut keeps pleasure full and a hope for more of its band of brothers like rock ‘n’ roll to come. It is fair to say that we are no blues experts but we know what we like and West of Flushing South of Frisco easily fits the bill.