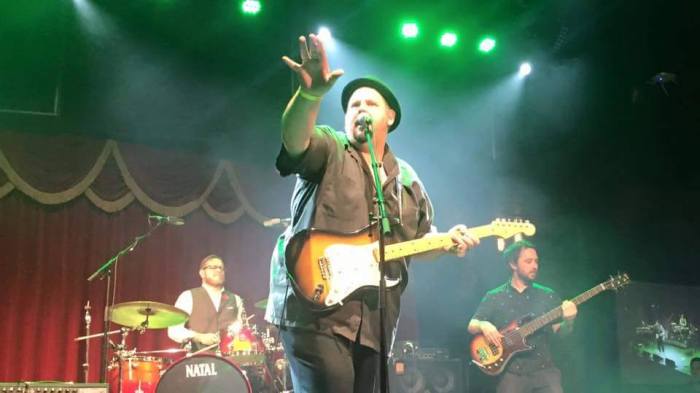 Fancy a rich dose of spice to your rock ‘n’ roll then the new album from Big Boy Bloater & The Limits is a must. Luxury Hobo offers nine rich blues tinged slices of contagious rock ’n’ roll which relentlessly infests body and emotions like a sonic viral complaint to which no cure is available or wanted.

Guitarist, singer, songwriter, and radio presenter, Big Boy Bloater is an artist to which hungry ears and acclaim seem to flock to. His career and unique style in songwriting, playing, and sound has seen him the feast of the blues and roots scenes, playing numerous major festivals across the US and Europe, and tour across Europe, the Middle-East, the USA, and Canada. Equally he has played behind and with the likes of Imelda May, Paloma Faith, and Wanda Jackson and been invited by Sir Paul McCartney to record with him at Abbey Road. He is a wanted man and easy to see why from Luxury Hobo alone.

Forming latest band Big Boy Bloater & The Limits in 2011, Big Boy Bloater defies the description of being a bluesman as predominantly tagged by a great many. As proven by Luxury Hobo, he creates fusions of flavours which no-one else seems to have the notion of casting. For the new album R&B is at times entangled with swamp and delta blues, seventies rock ‘n’ roll merged with old school rockabilly and fifties garage rock, and…

Reality is that the fusions are rich and plenty resulting in songs which play like old friends yet are like few other companions you may have come across, certainly outside of the man’s own creative psyche. Luxury Hobo is Big Boy Bloater’s darkest collection of songs too; its themes bred from a bout of depression in 2013. Talking of the time and release, Big Boy Bloater openly said “I had a breakdown, the album centres around that we’ve got all these great things but are still pissed off and medicate ourselves to be normal,” further adding that “The basic idea of the title is we are all luxury hobos these days, we get to go here, there and everywhere but no one has it the hard way now do they? We all have our luxuries, it’s that juxtaposition; I think the whole album is about the modern day life and society.”

As evidenced in the album’s opener alone it does not mean there is an absence of the flirtatious hooks and unpredictable twists, as well as the energy driven virulence fans have become so enamoured by in his music. Devils Not Angels is an irresistible start to the adventure; a flirtatious romp from its first guitar flame quickly breaking into a feisty swagger with a seriously catchy attitude and incitement of sound. From the smiling keys of Dan Edwards to the rousing rhythms of bassist Steven Oats and drummer Matt Cowley, the song has body and soul pumped with raw pleasure taken further care of by the gravelly voice and fiery guitar craft of Big Boy Bloater.

It is a superb start which still gets eclipsed straight away by the following and quite brilliant It Came Out Of The Swamp. It too bounces along with a contagious air to get swiftly involved with but its climate and textures are far more dark, sinister, and invasive. The bass borders on a carnal predation whilst the grooves are dirt encrusted flirtation as swamp blues get tainted with psych rock mischief and rockabilly devilry. Sea Sick Steve meets Th’ Legendary Shack Shakers is the best clue we have to describe the glorious infestation of the senses and imagination on offer, with hooks and melodies courtesy of a warped mix of B52’s and The Dirt Daubers.

I Love You (But I Can’t Stand Your Friends) rolls in with its pop ‘n’ rock charms next, tasty melodies cupping ears as vocals offer an opening romance with a sting in the tail. Both traits continue to entice and arouse ears as well as passions as the song strolls along with a grin on its face and rock flirtation in its heart. As its predecessors, the listener’s physical involvement is a quick success and equally drawn by the blues twang soaked seduction of The Devil’s Tail. Hips are soon swaying to its swerving body of grooves and alluring harmonies, ears there before them in submission to its sultry tempting before I Got The Feeling Someone’s Watching Me has the imagination engulfed in dark rock ‘n’ roll intrigue and salacious seduction. The outstanding song crawls over the senses, smooching with ears as the grainy tone of Big Boy Bloater’s vocals lays the seeds to dark deeds from unrelenting prying eyes whether in the noir lit streets of shadow thick towns, the bright romance of Parisian walkways, or more intimate surroundings.

From one immense highlight to another as the sexy swing of Luxury Hobo Blues takes centre stage with one wonderful nag of a tasty hook through a net of catchy rock ‘n’ roll. Potent harmonies and a web of sultry grooves only add to the riveting trap of a song before Robot Girlfriend offers futuristic love in a magnetic rockabilly/garage/blues rock shuffle. As all songs before it, even the dark crawls of It Came Out Of The Swamp and I Got The Feeling Someone’s Watching Me, it has a swing and vibrant energy which has the body tapping or indeed rocking in full allegiance, something All Things Considered decides to go against, though it too only see a sway take the body. Its soulful croon is wrapped in the smoulder of keys, that alone a simmering heat of temptation enhanced by the emotive cry of Big Boy Bloater and the spirals of melancholic yet invigorating guitar.

The album returns to tearing up the dance-floor with closer Not Cool Man, rhythms and riffs colluding to lay a canvas of energetic incitement whilst the bass flirts and grooves flare up above it. Rock ‘n’ roll to get close and personal with, the track perfectly concludes an album which has ears blissful and the body exhausted. Luxury Hobo is pure manna for the soul and if a better example of diversity loaded rock ‘n’ roll arrives this year, it will go down in history as a major classic, much as we suspect this treat from Big Boy Bloater & The Limits.