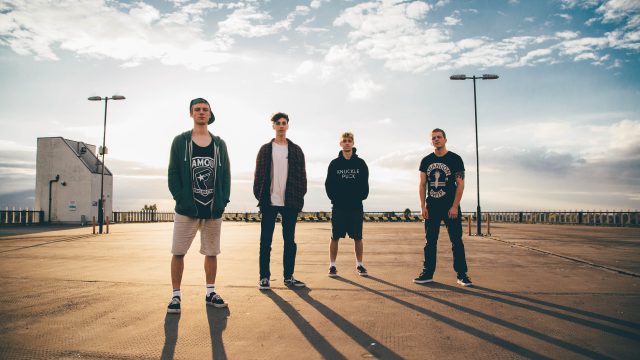 With pop punk releases seeming to be coming thick and fast already in 2016, Storyteller is another well worth giving some attention to. The new EP, or should that be album with its eight boisterous tracks, comes from UK punksters On The Open Road. It is a collection of rousing and openly accomplished tracks which may not veer on the side of uniqueness but certainly provides plenty to be thoroughly satisfied by.

Formed at the beginning of 2013, the Nottingham hailing On The Open Road began as the school friend trio of vocalist/guitarist Tom Hawk, bassist Dan Abey, and drummer Ollie Green. The release of their debut EP was not long in coming or soon after, the decision to grow with the addition of lead guitarist Jack Dutton. Musically the band draws on inspirations taken from the likes of Blink-182, Sum 41, Chunk! No, Captain Chunk! and A Day To Remember, a mix flavouring a sound which quickly ensured the band was an eagerly followed live proposal. Last year, the quartet released the Harm’s Way EP to potent responses, a success easy to expect being emulated by Storyteller.

Chump! starts things off, band vocals leaping into ears straight away amidst an antagonistic yet welcoming collusion of rhythms and riffs. It is an enjoyably rowdy start which slips straight into the like-minded and similarly sounding No Rush. The opener is really an extensive ‘intro’ to the second track which soon involves ears in its own boisterous canter interspersed with calmer strolls and emotive escapades. Retaining its aggressive energy and highly catchy anthemic prowess throughout, the song provides a tenacious slice of high energy pop punk with a familiar wrapping to a fresh heart in sound and enterprise.

The following Smooth Sailing Is A Fool’s Thought makes a heady entrance too, quickly arousing ears with its infectious temptation driven by a vocal energy and variation from Hawk and band. It is a potent element matched by the predatory riffs and rhythms badgering and inciting the sonic flames and piercing hooks also trespassing on the senses. Though it holds a similarity to songs around it, a trait all tracks have to good and at times frustrating effect, and entangles ears in recognisable spices from elsewhere, the song is a roar to greedily and regularly devour.

The grouchier tone and inescapable contagion of Regret Me Not hits the sweet spot quickly too. Again it is easy to offer up comparisons such as Blink 182 and The All-American Rejects but equally there is no stopping the track’s irresistible lures and a rich enjoyment of its sparkling character and revelry.

Current single Rainy Days steps up next with rapier like beats and bulky riffs stalking ears first before vocals and melodies wrap suggestively around the song’s bracing bellow. It is a potent invitation into the release though for personal tastes it is outshone by the thick qualities of the previous pair of songs, each suitable as an attention grabbing single. Nevertheless it leaves a want to hear more which Bedrock keenly provides. Starting with a melodic seducing which rises into a voracious tempest of hooks and imposing rhythms driven by the vocal eagerness of Hawk, the track is a resourceful and pleasing confrontation which, as the release itself, impresses more with every listen.

The enjoyable This Is Goodbye (I Tried) keeps things ruggedly energised and attention still firmly in the hands of On The Open Road before letting The Worst Guy bring things to a ferocious close. Featuring Adam Connor, the track is a minute and a half of blistering punk rock with highly welcomed primal and hostile tendencies which stands up there with Smooth Sailing Is A Fool’s Thought and Regret Me Not as the major highlights of Storyteller.

On The Open Road has yet to find a sound which stands unique to the crowd but they do have an ability to create seriously catchy and anthemic exploits which stir up an appetite for more. A success so many others would kill for.

Storyteller is released on February 26th via all outlets.