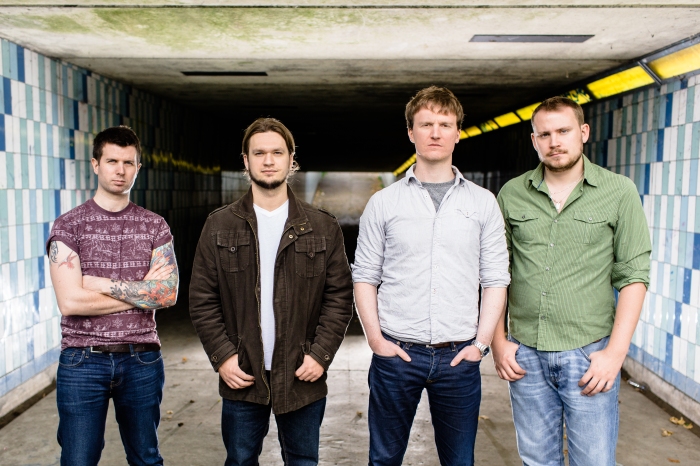 With an emotive potency to match a rich tapestry of sound, the Absence EP from British alternative rock quartet Rhyn, is an encounter which simply makes ears stand up and pay attention. That is merely on the first play, subsequent listens revealing new depths and imagination which ensures it becomes an increasingly impressive proposal. It starts with a bang, mellows out into a less forceful but certainly engaging seduction before offering a song which simply ingrains itself in thoughts and emotions. Absence is a release which warrants persistent attention offering accumulating rewards in return.

Formed in 2010, Rhyn hails from Buckinghamshire and initially emerged as the trio of lead vocalist/pianist Chris Black, guitarist/vocalist Guy Johnston, and bassist Dan Marr. After the release of their first demo, the band expanded to four, going through many drummers until finding in 2012 the right one to stabilise the line-up in Rhys Coombs. Video/single Finite Bodies sparked an increase of attention with its release in 2014, the band feverishly backing it live across London before last year heading into the studio with producer Jason Wilson (You Me At Six, Fightstar, We Are The Ocean) to record the Absence EP. Luring comparisons in different ways to bands such as Biffy Clyro, Muse, and Nirvana, the foursome show with their latest encounter that their sound has its own individual character too, one unafraid to roar or sombrely explore emotive reflections.

The EP opens with the rousing incitement of Elegy. Instantly a wall of eager riffs and punchy rhythms descend on ears, stirring up an appetite which is only increased by the great vocal drama and expression of Black as well as the unpredictable nature of the music around him. It is easy to understand the Muse references as an imposing rhythmic shuffle colludes with a web of guitar courted by captivating bass predation. Managing to be aggressive and experimental in a single moment, a raw seducing aligned to boisterous rock ‘n’ roll in another, and that is just a couple of aspects of the gripping and inventive landscape of the song, it has the imagination enthralled and ears fascinated from start to finish; it the kind of majestic anthem which bands are marked by.

The following Fall Away is equally energetic but with a mellower climate to its emerging croon. The keys of Black lay an emotive hand on ears as rhythms again find a skittish quality to their bait, whilst vocals once more impressively bring the heart of the song out, Johnston as potent as Black. Such the potency of its predecessor, the song was bound to slip a touch for personal tastes yet its melodic elegance and sonic craft leaves only a rich enjoyment which is echoed by Finite Bodies straight after. Keys lay a classically coloured coaxing before ears from its first breath, guitar and vocals adding their emotional hues into the embrace swiftly after. There is a fire to the song even then though which simmers and bursts into bolder life as it broadens its almost volatile nature and boldness.

Victory reinforces the satisfaction gained so far into its almost prowling incitement of ears, providing another surge of sonic theatre and emotive angst in thick flames of sound. It too is seamless in its merging of calmer explorations and feisty eruptions, spawning a catchiness which proves to be a constant in the band’s songs and has the listener as fully involved as the creativity breeding each encounter within Absence.

A slow burner that only becomes more persistent with every listen; it is unavoidably over shadowed by the outstanding might of The Only Place. The best track on the release, its opens with a croon of celestial keys and harmonic anguish which again draws swift thoughts of Muse. A rhythmically sparked energy slowly brews from that first breath too, erupting from a sombre sigh into a contagion of hooks and a melodic roar driven by the rich tones of Black. Imagining Faith No More doing a Bond theme is a hint to the scintillating chorus and thick weave of textures at play on ears and imagination. The likes of Porcupine Tree and The Palms equally can be suggested as a clue to the superb arousal of the senses, but again what emerges is something simply and masterfully Rhyn.

Concluded by the pleasing acoustic serenade of Believe In Ghosts with Black simply magnetic, the Absence EP is the declaration of a band ready to climb up into richer spotlights of attention. From its first moment to last, the release compels attention giving full enjoyment in return, with two particular moments which as good as leave ears awe struck.

The Absence EP is available from February 19th @ http://music.rhyn.eu/album/absence