Home › Music › Album › The Erkonauts – I Did Something Bad

The Erkonauts – I Did Something Bad

Having missed the release of I Did Something Bad first time around, we as so many others will be, are seriously grateful for its world-wide re-release through Kaotoxin Records. The debut outing for Geneva’s The Erkonauts, the album is a ferociously diverse and increasingly fascinating collage of genres and sound. As thick in unpredictability as it is rich in bold imagination, I Did Something Bad is one of those propositions that heavy duty recommendations swarm to. We can only join the crowd and with two additional new tracks to contemplate and devour for all, the album’s return is a not to be missed a second time treat.

Formed in 2014, The Erkonauts consists of ex-Sybreed members in bassist/vocalist Ales Campanelli and drummer Kevin Choiral, alongside guitarists Adrien Bornand and Sébastien Puiatti. Together they expel a sound which is as punk and heavy rock as it is metal, as much progressive enterprise as it is off kilter imagination. Fair to say the band made a hefty impact with the self-released outing of their debut album in 2014, the limited first and second press of I Did Something Bad greedily consumed with the band’s reputation growing in tandem through their live show and touring voracity. Produced by Drop (Samael, ex-Sybreed), the album is now poised to allow the rest of us slow coaches to dive into The Erkonauts bedlam, as mentioned with a pair of new songs recorded last year for extra rich taste.

The Great Ass Poopery opens up the tempest, a gloriously carnivorous bordering on carnal bassline infesting ears initially to be joined by the kinetic swings of Choiral. Alone it is gripping stuff but add the fiercely shimmering guitars aligned to rousing vocals and the air becomes aflame with rumbling attitude loaded rock ‘n’ roll. In some ways like Fear Factory meets Mudvayne with Suicidal Tendencies orchestrating, the punk metal assault is creative rampancy and virulent energy fired down the barrel of a dynamically hungry cannon. 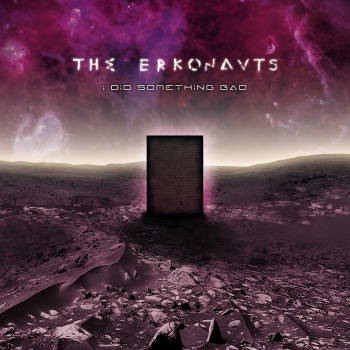 Tony 5 swaggers in next, its body similarly spawned to that of its predecessor but swiftly sharing its own consuming tenacity. As biting rhythms and swinging grooves embrace the excellent mix of clean and aggressively rasping vocals, the song is a cantankerous affair but with a body of spiralling twists and sonic resourcefulness which makes other’s references to bands such as System Of A Down and Gojira understandable. As the first, the track is a ravenous swamping of ears with superb clarity within its smothering touch for the swarm of progressive tenacity within to equally entice and shine.

There is a greater initial hostility to the following All the Girls should Die, riffs and rhythms angrily badgering ears whilst readying them for the fluid slip into melodic pastures with emotive mellow vocals. Entwining melodic rock fire with alternative metal flirtation as other elements snarl and grumble, the song ebbs and flows in its sonic ire whilst providing a perpetually compelling persuasion. Again there is a rampant directness upon ears at times, the track managing to be simultaneously predatory and seductive before making way for the electro lit, punk fired triumph of Nola. The first invading bassline tells you all you need to know about what is to come; the track flinging hooks and rapier beats around like a dervish whilst expelling a groove infested sonic devilry around them. Vocals again are as varied and impressive as the maelstrom of delicious sound and the increasing imagination of the aural emprise.

A sultry climate comes with Dominium Mundi, its evocative air a suggestive calm for the imagination to expand upon before the heart of the storm breaks with again addictively stabbing rhythms and aggressively hued vocals. Though it brews an inferno of sound, the earlier haunting peace continues to switch and collude with the raging animosity, leaving ears ringing, emotions aflame, and the body exhausted by the persistent breakout of heavily flirtatious grooves. The latter is weaponry which increases its pull in Hamster’s Ghosthouse straight after. With irritable riffery and stalking beats, the track stalks and infests the senses. Its hardcore/nu-metal infused rock ‘n’ roll is pure temptation as it leads the listener into a following progressive garden of melodic and classic rock. As many songs, how they start is no hint to how they depart and certainly their ever intriguing journeys as superbly epitomised here.

The creeping devilment and sonic rapacity of Gog raises the greed in an already eager appetite with ease, its dark character and lively imagination awash with biting elements and imposingly suggestive textures and flavours whilst Your Wife hugs with an acoustic caress shaped by equally warm vocals. The croon does get feistier across its melody and harmony soaked captivation but never relinquishes its elegance and charm.

There is no escaping the great humour that runs through the band’s songwriting and attitude either ,with its boldest moment coming in the punk rage and fun of 9 is better than 8. It is an unbridled riot, simple as that and impossible not to get physically involved in before Machine brings its own commanding incitement to the party. The first of the new tracks exclusive to the release, it is a growling, thrashing slab of metal diversity. Hellacious in its body, infectious in its armoury of hooks, grooves, and anthemic rhythms, the track is as much punk metal as it is extreme metal toxicity and manna to the ears.

Concluded by the tempestuous Culbutos, it a merger of thunderous confrontation and seductive tempting, I Did Something Bad has all the quality and mastery to leave body and soul enraptured. As the intricately and dramatically woven final song, the album is a creative collage of sound turned into a riveting theatre of invention and fiercely arousing adventure that no one should miss out on.

Quite simply, with a new album proposed for later this year, time is ripe for all newcomers to grab your piece of The Erkonauts via I Did Something Bad.

I Did Something Bad is out via Kaotoxin Records from February 12th @ http://www.kaotoxin.com/shop/page/6/

Check out our interview with Ales Campanelli @ https://ringmasterreviewintroduces.wordpress.com/2016/03/25/exploring-the-roar-of-the-erkonauts-with-ales-campanelli/