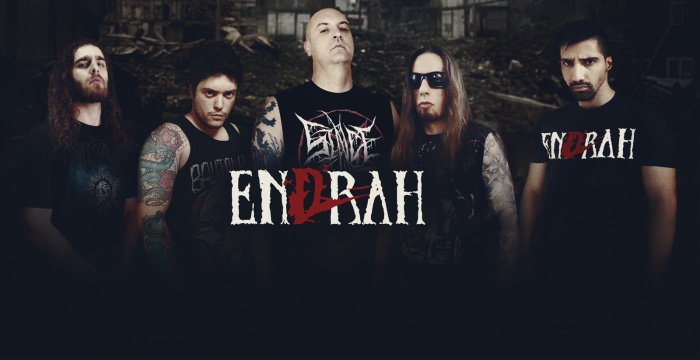 We all know that there have been some mighty and fiercely inspiring bands which have emerged out of the Brazilian metal over past decades but its underground scene is no lightweight either. It is a seriously thriving landscape bubbling with an array of impressive bands across the whole array of metal based styles. One such proposition is Sao Paulo Deathrashcore quartet ENDRAH, a band which formed in 2002. Since then they have become one of the major roars with the Brazilian underground, one increasingly nudging thicker and broader attention. Just becoming aware of them ourselves now, we seized on the chance to learn more about Endrah and future plans with vocalist Ryan Raes (Relentless).

Hello and many thanks for sparring your time to talk with us.

Can you first give us some background to how it all started and when you got involved?

ENDRAH is based out of Sao Paulo, Brazil. The band was formed by several Brazilian pro musicians and American Billy Graziadei of BIOHAZARD fame. My name is Relentless and I am the vocalist since 2005. I travel to Brazil for tours yearly, and we meet up at other locations around the world to tour.

I first heard of the band Endrah on a Blabbermouth.net post saying Project of Biohazard member looking for new vocalist. I checked it out and was blown away by the raw heavy sound. The band formed when several Brazilian members were playing together and Billy Graziadei married a Brazilian lady and they all got to jamming; things became Endrah eventually.

Have you been or are involved in other bands outside of Endrah?

Yes, I have been in California based metal band, VENGINCE for 21 years now. The band started in school, and we still play to this day. The band is more melodic than Endrah though still tough and heavy.

What inspired the name Endrah?

Endrah is a sort of twist of The Hindu God Indra and a person’s name from what I gather. I was not in the band or present during that time of the name process but each guy references Indra when asked. 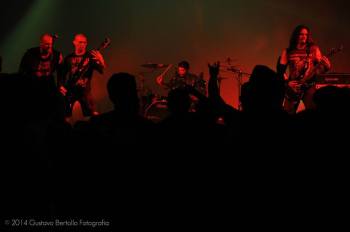 Since the early days, how would you say the band’s sound has evolved?

Our sound has become less desperate than the beginning, but Endrah is a very heavy and technical. We still bring our trademark sound to the new songs being recorded today and I think we have grown as musicians and song writers and still have a lot to show people.

Has it been more of an organic evolution of sound or has the band deliberately tried to bring in new things?

The bands recordings have become more polished, but I know we are letting it happen and not forcing anything. The band is not “commercially viable” to most people and we have spent most of our time in the underground hardcore and metal scenes.

Life is a journey and we have learned a lot while walking down these dirty streets. We have similar goals as humans and musicians even though we are living a half a world away most of the time. Endrah is very good at we do and we deserve good things to happen. We have had all sorts of behind the scenes adversity to overcome already.

What things drive the voice of the band in its early days and now?

The band has a strong political and social voice, along with very thought provoking lyrics that deal with revenge.

So this is the main inspiration to the lyrical side of your songs?

I always write song idea notes whenever something comes up. Watching the news, and reading American Free Press Newspaper will get enough and then visits to Brazil’s poverty stricken areas inspires social change and awareness.

Is there a process to the songwriting which generally guides the writing of songs? 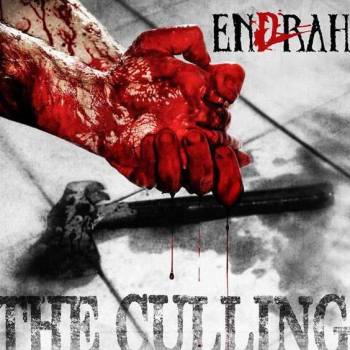 Covero the guitarist writes the riffs and then the bassist, Adriano, and drummer, Bruno add their parts and they tweak the song arrangements until it all flows good. Then they send to me videos of the rehearsals and demos to guide me for the lyrics and vocal mapping process which I do in my home studio in California. After that, the guys record their parts in Brazil, I do my vocals in the USA and then we mix and master somewhere. It’s all thanks to the internet that Endrah can truly thrive and communicate properly for a band.

Please give us some background to your latest release.

We are recording now for a May 2016 Release. The latest is a single titled Cadaver Na Barragem available online, and we did that for a Brazilian Compilation album. It rips! Give it a spin.

Can you give us some insight to the premise behind it?

This song is about our buddy Felipe who was stand up boarding on a reservoir in Brazil and he saw a bag floating on the water with tons of insects all over it. The smell apparently was horrific. He opened the bag and inside was a dead woman chopped in pieces. We wrote a song about what may have happened to her. It’s brutal!

You mentioned the writing process and with band members being so far apart presumably songs are pretty much finished going into the recording itself?

We try to be close as possible when entering the studio. We don’t have the luxury to pussy-foot around and waste money like the biggest bands do.

I am all about the live show. I thrive when it is live. I prefer touring over studio work. Endrah makes people go crazy and our crowds are wild and violent. It is a total pleasure to perform for our fans. You got to see an Endrah show yourself. Check us out!!

It is not easy for any new band to make an impact nationally let alone further afield. How has Endrah found it and are there the opportunities to make a mark if the determination is there?

Yes. In fact I think there are more “pro” Brazilian bands now than ever before in the metal genre. They have a couple dozen amazing heavy bands that are well known on social media and draw good [support]. Endrah knows most of them personally, including members of the biggest Brazilian heavy bands like Sepultura, Krisiun, Angra, etc.

How has the internet and social media impacted on the band to date? Do you see it as something destined to be a negative or a positive as a band grows and hopefully gets increasing success?

The fact that Facebook charges bands money to post to all our fans is total bullshit! They can make money in other ways, but now that they are a public company, they got to pull in more money every quarter. So, I see bands like our friends Biohazard who are only getting 10% of their audience reach when they post and it is apparently about 10% for any level band over 1,000 likes. So you have got to pay hundreds just to have your fans that follow you to all see the post. It’s some shit.

Endrah had to change our profile page when we switched record labels and we restarted the likes count, so it is not nearly as high as it should be, and it is difficult to grow the social media numbers when the companies want more and more money for artists who already have 90% of their music listeners illegally downloading the music to boot. That only leaves us with a few limited means of income and yet we are artists so we are not going away.

Once again Sir, thank you for sharing time with us; anything you would like to add?

Please check out ENDRAH and give us a like, drop us a comment, and share our pages. Also of course, please come to see us when we tour through your city next!!

Check out the band and their music further @ https://www.facebook.com/endrah/ |  http://endrah.com/