Ahead of their eagerly anticipated new album, US rockers Smash Fashion have uncaged a feistily flavoursome teaser in the shape of new single Junkie Luck. It has all the trademarks of the band’s decades bridging rock ‘n’ roll and the rousing mischief fans have come accustomed to and greedy for. It also hints at new flavours in the band’s power fuelled melodic roar ensuring intrigue for their upcoming release is all the more ripe.

Los Angeles bred, Smash Fashion has spent the past decade or so brewing up a sound merged from the raw energy of fifties rock ‘n’ roll, the hungry adventure of sixties psych and garage rock, and essences of punk ‘n’ roll forged ever since. With the salacious scent of glam and the anthemic energy of hard rock amongst other flavours also involved, the quartet create something that defies being pinned down yet has a broad familiarity which swiftly seduces ears and imagination. The creation of and driven by vocalist/guitarist Roger Deering, Smash Fashion has increasingly lured acclaim and eager attention across a trio of albums starting with A Gentlemens Guide to Sophisticated Savagery in 2006. Three years later Don’t Pet The Sweaty Things stirred things up further for the band though it was Big Cat Love in 2014 which sparked the most eager and broadest spotlights yet on both sides of the Atlantic. With a clutch of ear teasing singles and a praise garnering live presence which has seen the band share stages again on both sides of the pond with the likes of Ian Hunter, Arthur Lee and Love, The Zombies, Cheap Trick, Psychedelic Furs, The Alarm, Missing Person, Silversun Pickups, Orson, JET, and The 88 over the years backing up the success of their albums, Smash Fashion has become a greedily devoured band with songs that just make tongues lick lips; the new single Junkie Luck no exception. 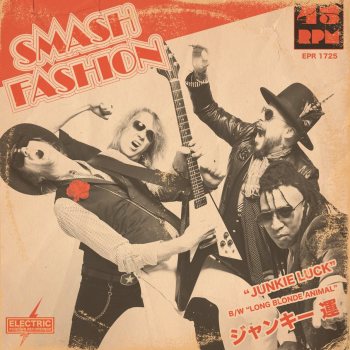 From its firs breath Junkie Luck is a rich enticement of guitar, the strings of Deering flirting alongside the sonic lead of Lloyd Stuart Casson (ex- Rock City Angels) before the former’s recognisable and always persuasive vocals potently leads the emergence of the song’s infectious heart. The swinging beats of drummer Repo (ex-Smack) manage to cage and incite further devilment in the song, assisted in kind by the prowling lure of Scarlet Rowe’s bass, both aiding the track’s grip on the listener’s hips and involvement. Musically Junkie Love is like a fiery blend of The Cars, Cheap Trick, Turbonegro, and Sweet with a healthy punk rock attitude but it emerges with a character and uniqueness which roars Smash Fashion.

On the B-side of the single is the boisterous punk ‘n’ roll cover of Golden Earring’s Long Blond Animal, Deering and co giving it fresh attitude for a rousing impact which for personal tastes actually puts the original in the shade just a touch. A song which will not be on the forthcoming album, it alone makes the single more than worthy of being checked out; Junkie Luck itself the thicker temptation urging all to add it to their music collection.

It is probably fair to say that you know what you are going to get with Smash Fashion, a blistering good time with sounds that easily incite body and soul, yet each release to date has only surprised and impressed with its own fresh revelry. There is no reason to expect anything different from the new album, just much more of the fun offered by Junkie Luck.

Junkie Luck is out now via Electric Pudding Recordings on download and on Ltd Ed 7”red vinyl.