Home › Interviews › Exploring the depths with Older Than Oceans

Exploring the depths with Older Than Oceans

Hailing from New York, Older Than Oceans is an alternative rock band which is certainly creating a name for themselves with their blend of a pop punk inspired melodic prowess and post-hardcore intensity and emotion. It is a sound which has openly evolved across the band’s releases so far and continues to blossom as the Long Island quintet work towards new exploits and another successful year. Getting in there early, we grabbed the opportunity to talk with the band…

Can you give us some background to the band and what brought you all together?

We all started playing together basically through people we were all acquainted with and the love for the type of music we all share.

Have you all been involved in other bands before and has the experiences added to what you are doing now?

Every member of Older Than Oceans has been in and out of bands growing up. We like to think we have found the perfect fit for us as a group [now].

Nothing specifically, we all just love how the name makes you think. Once you hear the name you think about it and its meaning…Just another form of expressing creativity.

We wanted to definitely put an emphasis on our melodic aspects while maintaining a heavier instrumental sound. Diversity definitely plays a big role in our writing.

We’ve definitely been evolving both as a band and into the Long Island scene. As you attend more and more local shows you connect with so many different people on so many levels and that in itself is all the drive we need as a band.

Well our first EP I, Undefined definitely had a more post-hardcore, experimental side to it where as our newer EP It’s Not Me, It’s You, shows a more mature melodic sound.

We are the type of people to take things as they come. As the band evolves and the people within it evolve, naturally the sound changes and you move forward with progression.

We all share a common core of favorite artists, including Four Year Strong, A Day To Remember, and Taking Back Sunday, that really influence our writing as band.

Is there a particular process to the songwriting which generally guides the writing of songs? 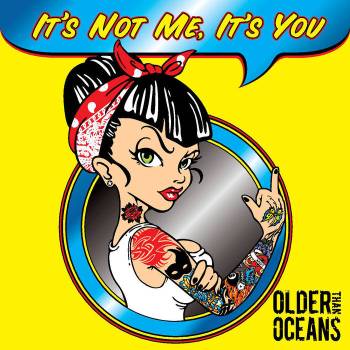 We generally like to write out our instrumentals and then move on to vocals when we have a song to work with. Everything comes together from there.

Where do inspirations to the lyrical side of your songs more often than not spring from?

Different experiences in all our lives are explained through these songs. Some happy, some sad, but hey that’s life.

Give us some background to your latest release, It’s Not Me, It’s You, and some insight to the themes and premise behind it and its songs.

It’s Not Me, It’s You to put it generally, is about a toxic relationship you may have with anyone where they may be taking advantage of you or doing wrong by you and you finally say that’s enough and stick up for yourself. A lot of different topics come into play with this EP but that would probably be the main one.

We have gone in to start recording in both situations. A lot of the time the studio is the perfect place to make the final touches on your songs. We usually like to have every song pretty much ready to go by the time we step into the studio.

We love to hold an emphasis on having fun on stage. We love to throw free merch off into the crowd, keep everyone incorporated into the show, and just have a great time. Ha-ha recently this past Christmas we even had our friend dressed up as Santa come out on stage and throw gifts out to the audience!

In our world today it’s almost all about social networking and your live performances. We plan to master both and continue to write great music in the future.

We appreciate everyone that took the time to read this. We plan to release some new stuff very soon so stay tuned!!

Learn more about and get in touch with Older Than Oceans @ https://www.facebook.com/OlderThanOceans/

Tags: A Day To Remember, Alternative Rock, Four Year Strong, i!, It's Not Me It's You, Older Than Oceans, Pop Punk, Post Hardcore, RingMaster Review, Taking Back Sunday, Undefined