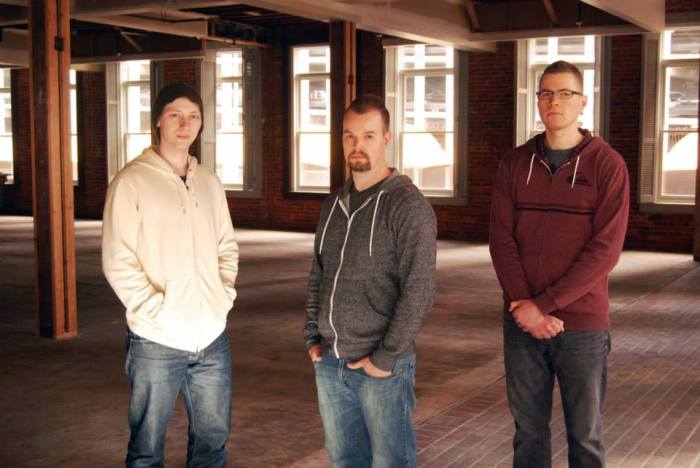 Feeding the imagination as boldly and adventurously as it does ears, Voids is quite simply an enthralling kaleidoscope of invention and craft. The ten track encounter is the new album from US progressive instrumentalists Odyssey, a Spokane, Washington based trio who are no strangers to acclaim thanks to their striking sound and creative dexterity. This new offering though simply towers over all that came before and other like styled bands around with in its multi-faceted aural emprise.

Emerging in 2007, Odyssey has increasingly impressed through a pair of albums in Objects in Space (2009) and An Abstract Existence (2011) as well as a trio of EPs in Schematics, The Conscious Device, and The Turning Tide; the last two splitting Voids and the band’s last album with the latter igniting the senses in 2014. As no better evidenced than within their new endeavour, the threesome of guitarist Jerrick Crites, bassist Jordan Hilker, and drummer Lukas Hilker sculpt exploits and scenarios which are as melodically spellbinding as they are tenaciously imposing, at times even carnivorous in their snarl and dynamics. Excesses are also conspicuous by their absence, not something which can always be said about instrumental metal and rock, but the individual skill and invention of each member is never hidden away either. The result, taking Voids as proof, is a gripping and ravenously boisterous collection of imagination fuelled canvases for the listener’s own thoughts to play within.

Emerge. Evolve. Adapt. opens up Voids, engulfing ears in a sonic mesh around the instantly flirtatious bass and thumping beats adding inviting bait. The track is soon strolling along with a vibrant air bound in sultry tendrils of guitar though, but an easy going proposal soon evolving into a more agitated and addictively volatile passage as riffs and beats chip away at the senses as the bass offers its throatier support. Continuing to twist and turn within a landscape of intrigue, every one of the song’s five minutes is a suggestive narrative to be revealed and captivating drama to explore. It is a glorious start to the album, like a portrait of a meeting between Arcade Messiah and Chimp Spanner with Native Construct whispering amongst them.

That is a description which often applies to the release, though the Odyssey style and imagination defies any direct comparisons as shown by the sterner but no less resourceful character of Negate The Infinite. Both Hilkers create a frame around and a floor of addictiveness for the enterprise flowing from Crites’ strings; the union a virulent proposal which is as imposing as it is seductive and irresistible to the imagination as equally so in the creative nagging of Like Moths to the Flame. Darker again, the song is a frontline of cantankerously gnawing riffs and a bestial bassline tempered this time by the lighter touch of sticks on skin and the sonic persuasion of guitar. As its title suggests, there is persistence to the song which will not desist, an undeterred drive and repetitious temptation which gets under the skin as a rhythmic flickering intermittently escalates with the same successful intent.

Through the frenetic virulence of Motives and the ethereal elegance of Echoes, the band nudges thoughts into new escapades with their creative hints. Both tracks again cast a sublime mix of contrasting textures which would be at war in the hands of others but here simple embrace and revolve around each other. The latter also has a reflective lustre which charms until Before There Were Eyes To See comes from the other side of light to take over with its dark intimidating shadows and predatory wave of riffs and beats bound to another sinisterly alluring bass incitement. As expected but always unpredictable, each piece of music takes ears and thoughts through a creative gest that has both enslaved and bold in their interpretations, visions that enjoyably change with every listen such the depth to the musical narratives offered.

The Plot Thickens is a rousing slice of rock ‘n’ roll but of course one which from its anthemically invigorating first breath soon opens up into a provocative climate of hint loaded musical espionage keeping body and mind on their toes before making way for the calmer radiance and spatial yet intimate temptation of Delineation. Once more shadows crowd in close to the sonic sun of the track, making their impact as heavier and grouchier elements seeping into the dramatic and increasingly clearer psychosis of the track.

The melodic hug of Left Unspoken brings an oasis of perpetual calm to ears next, though there is still a shadowy lining through the melancholic tone of the bass, before Voids is concluded by its outstanding title track. If you want a physical clue to the album the song has it all, all the attributes and diversity summed up in its maelstrom of genre skipping, imagination igniting revelry that gives expectations no inkling of where it is going to go or the turns it is going to fluidly and infectiously take.

The album is quite superb, almost a brand new adventure with every listen such its textural and suggestive depths, and an early benchmark for progressive adventure for the year ahead.

The self-released Voids is available from February 5th @ http://odysseyspokane.bandcamp.com/