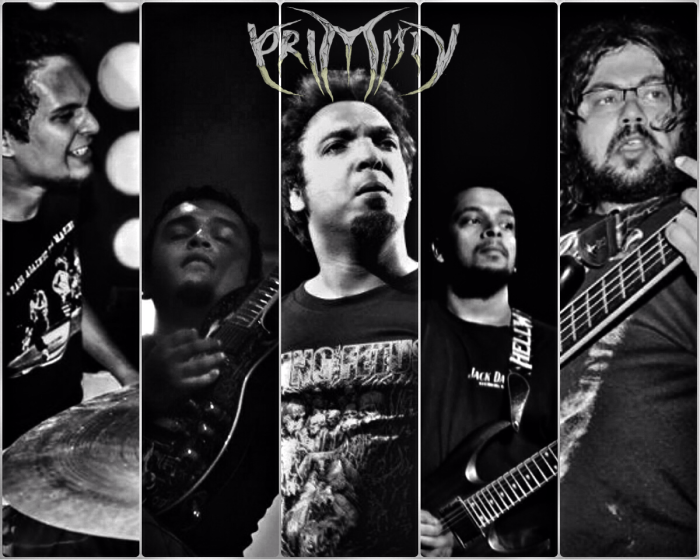 Looking for a heavy slug of intoxicating grooves within tar thick liquor made from doom and death metal imagination, then checking out the debut album from Primitiv would be a rewarding move. Immortal & Vile is a tenaciously resourceful and relentlessly predatory proposal from an India hailing quintet showing more of the depth of the country’s metal scene. As you might hope from the band’s name, their sound and indeed release is a bestial protagonist of ears and appetite, a prowling devouring of the senses which is just as potent in inflaming the imagination.

Primitiv was formed in 2013 by bassist Riju Dasgupta and guitarist Rajarshi Bhattacharyya, former band-mates in Albatross and Workshop. Evolving a sound bred in true old-school metal, the band’s creativity, as shown by their album, grew to also involve thick strains of sludge and stoner virulence in the barbarous tempests of doom infested, death fuelled predation that points them out. With vocalist Nitin Rajan (Sledge, Morticide), guitarist Kiron Kumar (Hellwind, Colossus), and drummer Pushkar Joshi (Blood Meridian) alongside the founding pair, the album needs little time to whip up hunger in ears for its ravenous and seductive intrusions, though the release first opens with a more arguably expected but certainly successful epic flavoured introduction courtesy of Clash of the Gods. As the lone demonic tones of Rajan lay the base for the album’s exploration through “the creation of mankind, amidst dominating creatures, and its ponderous progression towards damnation”, stringed temptation and rising orchestral breaths unite to nudge the imagination and colour the air. It is a potent if unsurprising coaxing easily awakening eager ears and thoughts ready for the lumbering and rapacious apocalypse of World War Zero.

The second track stalks the listener from the off but with a liveliness which has the body involved as swiftly and firmly as the merging weave of spicy grooves holds the passions. Bestial and infectious, and driven by the iron loaded swings of Joshi in tandem with the dark fiendish tone of Dasgupta’s bass, the track crawls destructively yet engagingly with the grizzled throat raw prowess of Rajan straddling its presence. A lining of sonic enterprise is soon in evidence though, aligning itself to the dark rabidity on offer whilst casting increasingly gripping grooves and also a more toxic but equally alluring melodic tempting; it all springing from the skilfully manipulated strings on Bhattacharya and Kumar’s guitars.

The impressive start continues into Demon of Science where again imagination soaked adventure and brutality collude to smother and invade the senses. Rajan is again as primal in tone and varied in delivery as the antagonistic sounds crowding around his lead, an industrial spicing proving the point as it adds a compelling temper to the hostility fuelling the track. The uncompromising swings of Joshi ebb and flow in violence too though not their venom as they give the song a torrential drive emulated in the merciless rabidity of sound and attitude devouring ears.

If the listener thought it was being stalked by the first songs, Lake Rancid shows it was previously only a flirtation with its own compassionless harrying. The track is a primordial contagion with ravenous butchery from its first breath mixing with pitiless riffs and uncharitable rhythms to consume the senses as a winery of sonic imagination and magnetic craft lights the way. As the album, it is a gloriously sadistic pillaging of the soul quickly matched in success and raw majesty by Dead Man’s Desert. By this point, grooves shared by the band have a richer stoner-esque hue though they come as toxic and invasive as anything before. Like a sadistic heathen king, Rajan’s rasping tones crawl mercilessly through ears, riding this dirty tide of doom bred savagery bound in evocative and at times poetic melodic seducing; everything ultimately drenched in death and emotional carnality.

Immortal & Vile is brought to a powerful close by firstly the corrosive suffocation of Taurus and finally the sanguinary rock ‘n’ roll of Lords of Primitiv. The first of the two is a cancerous affair, every note and syllable a pestilential immersion for the senses and infestation of the psyche whilst its successor with less barbarity swings and sways with smouldering grooves and smoking sonic endeavour around sinew cast rhythms. Voracious at heart and eagerly flirtatious in its design, the track is a fiery slice of old school rock and coldblooded attitude, and quite irresistible.

Indian label Transcending Obscurity is developing a thoroughly enjoyable habit of giving the world some stirring and impressive metal incitements from India and surrounding areas; Immortal & Vile is right up there as one of the best yet.

Immortal & Vile is out now via Transcending Obscurity Distribution @ https://transcendingobscurityindia.bandcamp.com/album/immortal-and-vile-death-metal