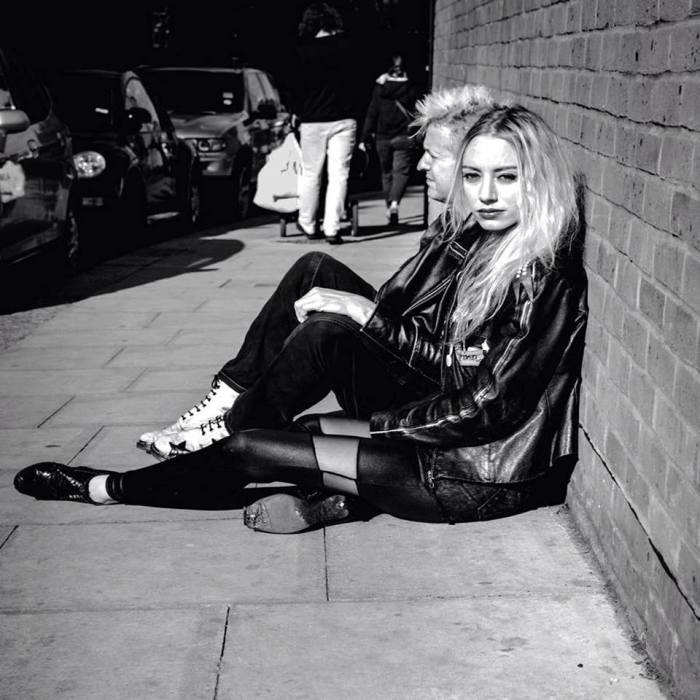 It was September 2013 when we last had Healthy Junkies igniting ears with a release; that being their impressive second album The Lost Refuge. One of our parting lines then was that the UK had “come of age and you only sense they will get better.” It was partly right as the London quartet has only gone from strength to strength on the live scene and now with third album Box of Chaos. Their coming of age back then though might have been a touch premature for the riveting and dynamic fourteen track punk ‘n’ roll stomp from the band firmly outshines its acclaimed predecessor.

Emerging from a meeting between founders, guitarist Phil Honey-Jones and Paris hailing vocalist Nina Courson at the venue Punk in Soho in 2009 and their creative bonding over mutual loves and influences, melodic punks Healthy Junkies took little time to start leaving their stamp on the UK punk and rock scene. Making their live debut at an all-day punk festival in Brighton in 2010, the band has become a rousing roar around the UK moving into Europe and one of London’s most exciting and prominent live attractions with their self-hosted monthly night at The Unicorn in Camden a regular treat. Debut album Sick Note awoke a broader attention on the band when released, a success forcibly backed up by The Lost Refuge. Throughout the time line-up changes have only seemed to refuel the band at various times too, the latest coming since the recording of Box of Chaos with bassist Ivan Baragone replacing the departed Dave Renegade alongside Courson, Honey Jones, and drummer Tony Alda.

Whilst The Lost Refuge was a rousing tempest in ears from the first roar, Box of Chaos takes its time to build and entice even greater greedier reactions. Certainly its first play and touch is a potent lure but each listen reveals greater depths and imagination at the heart of the release which only adds to its strength and drama. There is also seemingly richer old school punk and rock ‘n’ roll hues this time around, essences no doubt bred from inspirations to Honey-Jones and Courson such as Sonic Youth, Hole, Sex Pistols, Bauhaus, Siouxsie and the Banshees, Iggy and the Stooges, and David Bowie. One band which our thoughts most leaned to as a reference across the new album though is Penetration; a similarly evocative nature and tone to the great County Durham band spicing the band’s adventurous sound from the off with both Nice n Sleazy and its successor Never Want It Again. The opener emerges on a sonic shimmer with waiting riffs quickly stirring into predatory life as ears continue to be enveloped in that initial mist. Rhythms are soon just as pressing as Coulson’s magnetic voice seduces, her tones a smouldering caress within the rising fiery heat of the song. It is an increasingly virulent protagonist grabbing swift involvement of the listener, setting them up for more riotous stroll of Never Want It Again. It is a tenacious canter though superbly twisted with ska/like asides as rhythms and vocals flirtatiously swing with mischievous intent within the otherwise busy attitude loaded rock ‘n’ roll of the song.

Danny Trash keeps the potent start to the album in top gear, its catchy canter and haunted atmosphere soon enslaving hips and imagination respectively. As expected and already shown, Health Junkies produce choruses and anthemic moments which are inescapable; voice and body soon on board with a track which is a maze of evocative sounds, pungent emotion, and creatively boisterous exploits.

The following Hypocrite is the opposite but just as glorious, its punk rock fury offering one minute fifteen seconds of cantankerous rock ‘n’ roll with raw riffs and repetitious brawling spawned from delicious old school incitement before I Don’t Give a Damn springs with a similar aggressive heart into ears. It is soon casting another prowling proposal with addictive hooks and gripping rhythms; both swift slavery as the guitars weave a melodically provocative narrative for thoughts to get wound up in as successfully as the body is lost to the anthemic prowess of the encounter.

The more hard rock meets punk ‘n’ roll tempting of Je Suis Free is an inviting and again contagious defiance next whilst Watch Out has a blues rock lining to its infection loaded, roister fuelled smoulder. Both tracks lead the listener into energetic and galvanic ways before Rebellion, with presumably Honey-Jones standing toe to toe with Courson in duet, stirring up another urge to take a stand and lose inhibitions in voice and deed. The track is Healthy Junkies at their rock ‘n’ roll best, direct, lyrically potent, yet igniting the want to fling the body around.

The confrontational rock pop enticement of Just a Fool steps up next, it too quickly sparking total involvement before the outstanding creative theatre of Runaway Devil infests ears and psyche. There is no escaping a Siouxsie and the Banshees air to the song, keys running their melodic fingers over the senses as Courson’s ethereal tones enchant seductively around the darker touch of rhythms. In short time the track is soon a fiercely bubbling and intimidating tempting, reminding of fellow Londoners The Duel, but still with that early coaxing a rich lure.

There are numerous peaks in the landscape of the album, that one pinnacle almost matched by the dirtier rock ‘n’ roll of Hustle Street straight after and indeed the twin tempting of the melodically mesmeric Captive with its dub shimmer and the robust swagger of Don’t Give Up where scything beats, bass rumbling, and scuzzy riffery crowd around the ever alluring tones of Courson. Reggae seeded turns and again dub spiced inventiveness only increases its grip on ears and appetite, Ruts DC like imagination leaving satisfaction bulging.

Closing with D7, another spellbinding mix of evocative calms, atmospheric haunting, and vocal seducing in a case of antagonistically anthemic rebel-rousing, Box of Chaos is a thrilling blaze for the ears and manna for the spirit from a band looking at their most successful and surely acclaimed loaded year yet.

Box of Chaos is released February via STP Records.