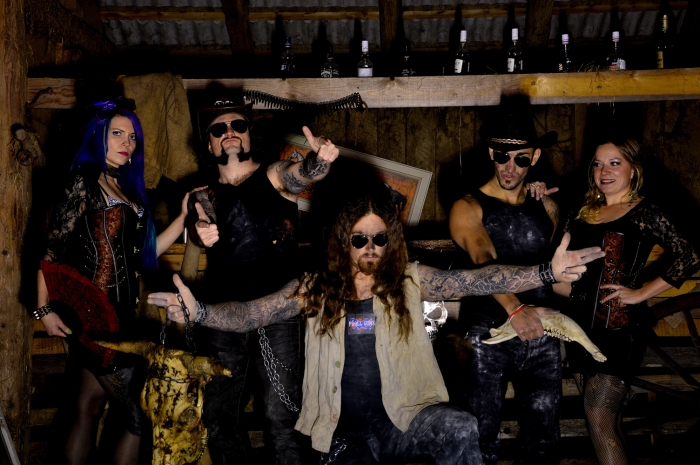 Austria is not renowned for its Wild West history or rascally varmints but it has produced a dirty, low-down, riff-slinger to send any outlaw running for the hills by the name of Proll Guns. The Salzburg based trio creates a sound which is like a predatory dust storm; uncompromising and intrusive western thrash ‘n’ roll which in the form of their band’s new album Horseflesh BBQ, just rifles ears and guns down defiance to its raw invasive way.

The ten track release is a bitch slap of thrash fuelled rock ‘n’ roll, like Grifter meets Pantera meets Triggerman in a gunfight of fiery grooves, brutal rhythms, and grouchy riffs. Imagine the possible soundtrack to a Tarantino merger of his films Dust Till Dawn and Django Unchained and Horseflesh BBQ is it. Making a potent impression with debut album And the Western Blood Runs in 2013, Proll Guns gave a tasty hint of its successor with the Fucking Troublemaker EP last year. Now the threesome of lead vocalist/bassist Evil Ed, vocalist/guitarist The Burner, and drummer Cra “Y“Maker have struck up the full stampede with the release of Horseflesh BBQ via NRT Records.

Mixed and mastered by producer Tue Madsen, Horseflesh BBQ brings to ears the dusty west with opener Texas Banjo Massacre, its redneck lures pulling the imagination into the tempestuous and devilish landscape to be persistently dragged over by the nine other thrash whipped stallions to come. The instrumental prowls and swipes at the senses, riffs and rhythms as antagonistic as the riffs are carnivorous and grooves intoxicating. It is a stirring start quickly matched and surpassed by the barbarous rioting of Horseflesh Barbecue. In no time the great grizzled tone of Evil Ed’s voice bullies and invites, its bearish animosity and belligerence matched by the scything swings of Cra “Y“Maker as The Burnet lassoes ears with venomously tempting grooves. 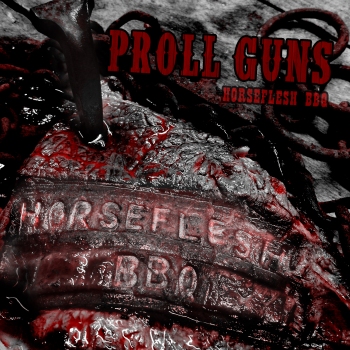 From Texas To Hell continues the sweaty and mischievous exploits of its predecessor, though initially it presents a gentle western welcome to a scenic peaceful landscape. Things soon turns nasty though as the riff loaded bandits launch another trash bred slab of bruising rock ‘n’ roll on the senses. No quarters are given and little mercy shown even with its contagious virulence, a quality just as agreeably unleashed by the evil-eyed Bloodgun Blues with its hip enslaving swagger and straight after the feral protagonist that is Fucking Troublemaker. The second of the two is addiction in hostile abandon, the glorious bastard son thrown out as the lead lure into Horseflesh BBQ and easy to see why with its roguish catchiness and five star hooks.

The blues laced heavy rock of Reno Gang beats up on ears next, it’s less gripping roar and bad-blood, in relation to its companions, still leading body and lusty enjoyment into naughty deeds before Lookin’ Out my Backdoor corrals them with flirtatious rhythms into the folkish, almost Celtic revelry at the heart of its moonshine soaked blowout. Both get ears and appetite all lustful again but not so much as the salacious wrong-doings of The Revolver. The track is like a modern day version of that villainous character tying maidens to railway tracks in silent movies, its animated air and provocative banjo twangs shaping the irresistible bounder of a song.

Swinging like an outlaw at the end of a hangman’s rope, Execution steps up next; its grooves moving like a temptress with spicy sonic seduction as everything becomes a more ferocious blaze around them. There is no escaping the bait, ears devouring eagerly before turning to the closing dark drama of Southern Slavery. It is an imagination sparking and emotion darkening portrait of sound but a touch of an anti-climax to the rousing ride the album has the listener on before it. All the same it is an intriguing and attention holding end to one thoroughly and increasingly enjoyable raid on the body and passions.

Like possibly many others, Horseflesh BBQ was our first ride with the Proll Guns but it certainly will not be the last. Rock ‘n’ roll has just revealed a whole new desperado.

Horseflesh BBQ is available from January 29th via NRT Records through most online stores and @ https://prollguns.bandcamp.com/album/horseflesh-bbq