Whether by design or just how personal appetite took to its rancorous yet feisty mesh of sound, fair to say Des Endes Anfang, the debut album from German metallers Tranquillizer, took its time to fully persuade. Convince it did though, from the first couple of listens unveiling an increasing magnetism that ears could only take notice of. With the discovery of more imaginative layers aligned to involved flavours and textures adding to its appeal over subsequent plays, the nine track blend of ruinous black and melodic death metal emerged a potently satisfying proposal.

Formed by vocalist/trombonist Johannes Guerken and bassist Madelaine Kühn, the Frankfurt hailing Tranquillizer endured a host of line-up shuffles as they forged a soon eagerly supported live presence leading to and from the release of debut EP Blutrot in 2011. With their first German tour following two years later, the band worked their sound and way towards the creation and recent release of first album Des Endes Anfang, an encounter seeing guitarists Aleksander Vetter and Fabian Wohlgemuth, and drummer Nico Dunemann alongside Gauerke and Kühn, drawing broader attention with its collusion of varied flavours with that core extreme tempest of sound. 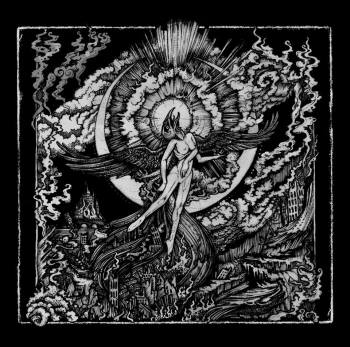 Agonie is the first to entangle the senses and imagination; the brief instrumental brewing smog of sonic suggestiveness within a similarly sculpted portentous atmosphere. Soon rhythms are bringing an energetic coaxing to the mix, their anthemic prowess against the more caustic guitars a potent lure into the more irritable nature of Eine andere Welt. The throat stripping vocals of Guerken soon scar and infest the air, they the first strain in his varied delivery which differs in strength but always keeps ears guessing and thoughts satisfied. Around him the guitars spin a web of contrasting sonic enticing and savaging riffs, the bass of Kühn a provocative predator alongside. As in the first and repeated throughout the album, there is a contagious swagger and rock ‘n’ roll swing at the heart of the song, its success an accomplished temper to the more insidious elements in the band’s sound and tracks like the following Bestie Krieg. Unsurprisingly there is a primal air and bestial tone to the song as it climbs venomously through ears, the rhythms providing a rabid onslaught within the more deliberate stalking from guitars and vocals.

Werde Zu Staub conjures a more melodic if still antagonistic colour to its blackened rock ‘n’ roll, the guitars as much a suggestive flirtation as an intimidating fury within the fierce and catchy incitement. Even bass and drums fluidly switch between merciless menacing and magnetic guidance across the song’s volatile narrative of sound before Kapitulation grinds its nagging riffs and open bitterness into the psyche through a stormy and unrelenting challenge. The track is a tempestuous affair though that evolves in emotion and climate, never veering away from the darkest feelings and bad blooded intent but drawing on some tantalising melodies and melancholy drenched calms to enrich its emotive journey.

The insatiable onslaught of Blutrot grips and thrills next, its corrosive entrance evolving into another predacious stalking of the senses and in turn a cauldron of virulent grooves and toxic expulsions. Each element reveals its own infectiously involving swing no better epitomised than by the rich blaze of Guerken’s trombone making its first major appearance on the album and quickly elevating what is already a riveting encounter with its herald like calls.

That new element seems to spark new invention and unpredictability within the album even without the help of its presence. Welk bounds in next in a tapestry of diverse flavours and almost bedlamic ideation, whilst brewing belligerent animosity. The track, as its predecessor, swiftly stands above what came before and it is no coincidence that the album is at its pinnacle when the band gets bolder with their imagination and adventurous entangling of varied styles without defusing their devouring of ears with sonic and vocal jaundice.

Des Endes Anfang remains at its new plateau through the final pair of tracks; the carnal rabidity of Ins Licht first smothering the listener in murderous enmity. All the time though it is whipping up a contagious persuasion around the bitter range of vocal trespasses, the guitars step by magnetic step driving towards melodic escapades if still with the raw winds of corrosive virulence at their backs. Its impressive buffeting is replaced by the voracious yet less violent Seelenreiter; a tantalising whipping up of ears and imagination opening with welcoming siren like blasts of trombone before sculpting a maelstrom of swirling sonic tendrils and heftily resourceful rhythms.

It is a fine end to an album which only grows and impresses more with repeated plays. Wait twenty odd minutes after the last note of the closer and there is a more than decent secret track, but the best is already in the open, perpetually pushing Tranquillizer and their enjoyable scourge of a release to new attention.