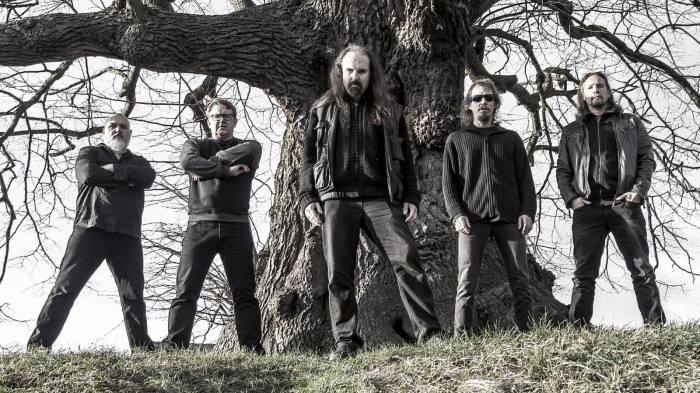 State Of Desolation is the debut album from German heavy metallers Shotgun Justice, a band which for the past decade has seemingly become a potent live force in their homeland. That is easy to understand given the potential to explode the songs making up their first full-length have, though it is a spark that is frustratingly unrealised across much of State Of Desolation. Nevertheless the album is an intriguing proposal which, without ever lighting that fire, keeps drawing ears back with its intriguing array of flavours and to see if so far reserved but satisfied reactions can change.

Formed in 2003 by drummer Tobias Groß and guitarist Erik Dembke, Shotgun Justice’s sound is bred in old school heavy metal but as keen to infuse spices from varied essences from thrash to hard rock into its exploits. As shown by State Of Desolation, at times it is a richly potent mix and in other moments missing the mark, certainly for personal tastes, but it is an adventure which lures intriguingly keen ears.

With vocalist Marco Kräft, bassist Tom Schubert, and guitarist Kai Brennecke alongside Groß and Dembke, Shotgun Justice start that adventure in their album with Proclamation Of War; a portentous instrumental with vocal samples setting the theme before Blood For Blood takes hold of ears with its antagonistic riffs and rhythmic swipes; them all carrying an edge of intimidation. The entrance of Kräft vocals sparks some agreeable hooks as the song relaxes its menace a touch, though bass and drums still prowl with force around the unspectacular yet inviting hard rock/metal body of the song. It is a strong start to the album elevated by some inventive twists and turns exposing their bait later into the encounter.

The following Blessed With Fire similarly has all the right ingredients to grab attention but not the last essence to leap into loftier success though with its rhythmic rumble and growling riffs, there is no inclination to pass it by before its end. A touch of ArcticFlame frequents the song and reappears in its successor Nothing Left To Fear, a predatory proposal of a song with attitude to its courting of ears and fire in its sonic belly, each additionally blessed with some deliciously spicy grooves. The track soon outshines its predecessors; its thrash meets classic metal nature an instinctive incitement for involvement before Nemesis (A Global Killer) offers its power fuelled balladry for easy consumption. Schubert’s bass is a great dark rumble in the song’s lining whilst Kräft leans on his vocal strengths to portray the emotive narrative though sadly the addition of operatic female just does not work for these ears at all.

The Scales Of Justice wraps ears in its fine suggestive sounds next, sparking ears and thoughts alike with its percussive lures and wiry guitar persuasion, though harmonies in the background lay less enjoyably on ears. It is a potent hint for the imagination though leading right into the rawer jaws of Head Full Of Bullets. Teasing with its low key but provocative entrance, the song is soon charging with thrash spawned nostrils flared as rhythms smacking its robust flank. At its centre a blues induced calm comes over the track to further engage an already keen appetite for the song, its previously urgent charge now another predatory stalking beneath an anthemic vocal call.

Things get more adventurous and unpredictable from hereon in on the album, and equally more fascinating and tempting. Firstly Forsaken steps forward with a tapestry of cosmopolitan rhythms aligned to a sultry Asian vocal lure, the bass walking around them with a brooding tone to its strings. It is a great start which continues as guitars spin their exotic web and vocals find new flavour to their delivery if also a little bit of waywardness in trying to compliment the impressing sounds around them. As the track continues to expand its theatre and thrills it takes best track honours with ease.

The heavier bones and weight of Harvest The Storm takes over to explore its own progressively natured trail of vocal diversity and tenaciously inflamed imagination. At times an aggressive torrent of provocation and in others turns an evocative melody thick calm, the song is a compelling tempest which as its predecessor, reveals a potential and boldness suggesting greater things ahead that is missing in the earlier part of the album.

Ending with its similarly impacting title track, it is fair to say that State Of Desolation is a volatile proposition in its strengths and qualities but a release which certainly across its final quartet of songs leaves a great taste in ears and enjoyment. Though over a decade as a band, Shotgun Justice still feel like a work in progress but as suggested by Forsaken alone, moving in the right direction.

State Of Desolation is out now via Kernkraftritter Records.