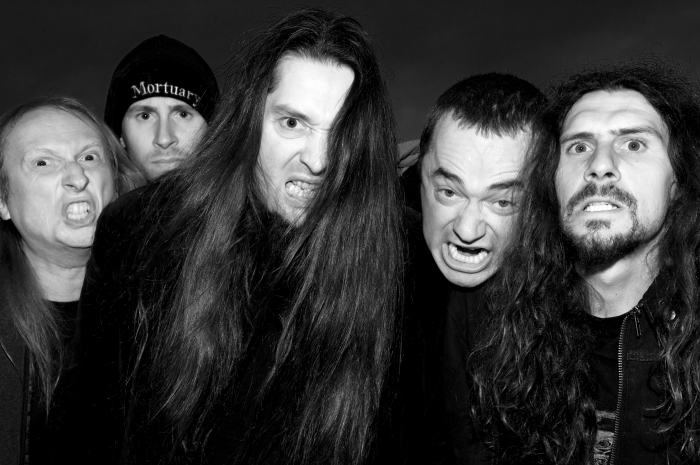 Formed in 1989, Mortuary has been a potent protagonist within the French metal scene, certainly since the release of their debut album Hazards Of Creation seven years later. The well-received release followed a clutch of demos and awoke the beginnings of broader recognition for their brutal death/thrash onslaught of a sound. Now the band release their fifth album in the ferocious shape of Nothingless Than Nothingness, a beast of a record which might not turn the extreme metal world on its head but definitely gives it a rousing roar to contemplate in 2016.

Since that first full-length, Mortuary has unleashed a trio of attention whipped albums in Eradicate (1998), Agony in Red (2003), and G.O.D. (Glorify Our Destroyers) (2010)whilst live their sound has scarred stages alongside the likes of Coroner, S.U.P., Obituary, Krabathor, Agressor, Hypocrisy, Hatesphere, S-core, and Severe. As Nothingless Than Nothingness rages against ears and sparks the imagination, the album suggests Mortuary is ready to entice a whole new wealth of appetites with its accomplished and maturely honed anthemic barbarity and step into broader spotlights. 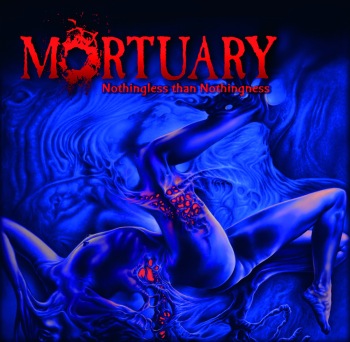 The initial industrial apocalyptic scenery of brief opener Only Dead Witness grabs ears first, its portentous air soon building into a muggy and intimidating confrontation led by the vocal scowl of Patrick Germonville. Amidst raw suggestiveness spread by guitar and bass, the stirring beats of Johann Voirin provoke a more energetic bellow of riffs and intensity before the scene setter eventually drifts off into the jaws of Empty. An unbridled onslaught from its first few breaths, the second track savages and incites as thrash and death metal collude in a punk infested rampage. The bass of Jean-Noël Verbecq prowls this with zeal as the track careers over the senses, sparking an infectiousness soon taken up by a variety of vocals and the sonic enterprise of guitarist Alexis Baudin.

For all its fearsome breeding, the song is ultimately primal rock ‘n’ roll more than matched in success and prowess by both Tube and Above. The first is a hornet’s nest of grooves and nagging riffs with rhythms just as unrelenting in their cantankerously violent way whilst its successor emulates the predatory toxicity with its own exhaustive and vicious barbarism aligned to a groove loaded tempting. As all songs, the pair reveals unpredictability to the addictively infectious elements colouring their walls of hostility and a creative adventure and craft which may get a touch overwhelmed by the tsunami of intensity but leaves the imagination as enthused as ears.

Through the crusty yet refreshing air and rabidity of Pleasuffering and the hellacious ride of U-Man Slept, K-Os Crawled, the album whips up an even more mouth-watering and debilitating storm. Both tracks come thick in rage and striking flavour blending enterprise whilst Yesterdead straight after has a touch of fellow French hardcore metallers Yugal to its brawling, punk infused trespass.

Song by song, Nothingless Than Nothingness just seems to get stronger and more compelling; whether from raising the ante in invention or by the wearing down of the listener and psyche and it continues with the searing rancor and sonic ferocity of K and in turn the hardcore festering enmity of Morbid Existence. The first of the duo also explores calmer, more ambience hued ventures within its diversely textured landscape of varied metal whilst another furious onslaught of passion rousing death punk ‘n’ roll has the listener in its inescapable grip in the second before the brutalising smog of sonic and rhythmic bad blood that is Kingdom surges through ears with the infectiousness that as much as anything marks out Nothingless Than Nothingness as something to eagerly devour. Once more the band push ideas and expectation avoiding turns within the aural tirade, keeping attention and appetite as intrigued as the sheer force of the encounter feeds bloodlust.

It is a mighty end to an excellent offering from Mortuary; an album to heavily please and leave pleasure thick whilst pushing the band further to the fore of extreme metal.

Nothingless Than Nothingness is out now via Goregeous Productions @ http://goregeousproductions.bandcamp.com/album/nothingless-than-nothingness