Released in the Autumn of 2014, the self-titled debut album from San Diego quartet Desert Suns gets its deserved official worldwide re-release this January through a special collaboration between Ripple Music and HeviSike Records. For those missing that original limited run of 300 copies on vinyl through Birmingham-based HeviSike , its return is the chance to grab one highly flavoursome slab of stoner bred rock ‘n’ roll.

Formed late 2013, Desert Suns quickly drew attention with their first single Burning Temples which was released in the January of the following year. Seven months later and their six track debut album confirmed the initial potency of sound and imagination within that early single in a fiery and immersive blend of stoner and heavy metal, psyche and blues rock. The band’s sound, as at times their lyrics and song themes, demands attention without the heavy weight of it ever becoming invasively imposing, and within the Tony Reed (Mos Generator/Stone Axe) mastered album provides a powerful invitation to the listener, if without really wanting to take no for an answer. 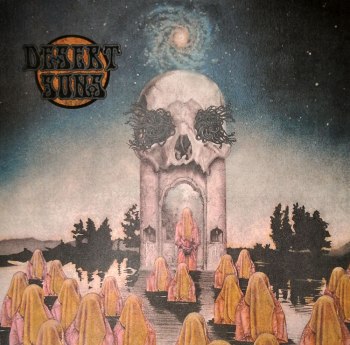 Burning Temples starts things off, an initial sonic static the bed for heavier rumblings and clamorous energies before one hefty groove grows from within the low key tempest. It relaxes with an elegant shimmer to its lure and melodic spice to its touch as the dark bassline of David Russell aligns to his quickly alluring vocals though the forceful and agile beats of drummer Ben McDowell subsequently raises the intensity as the guitars of Woogie Maggard and Anthony Belluto twist and turn with magnetic grooves and riffs. As the track becomes a contagious blaze enslaving hips, ears, and imagination, it is easy to sense Black Sabbath and Deep Purple inspirations at play, the music masterfully and voraciously ebbing and flowing in energy whilst providing a continuous full-on sultry temptation.

After the incendiary climax of the first song has ignited ears and keen involvement further, the following Space Pussy shows it is even more ferociously enflamed with quick sonic and melodic intoxication. Raw and seductive flames soon live up to the suggested salacious exploits and skills of the song’s protagonist, their intensive heat casting a vociferous smoulder in sound and atmosphere which almost has the senses woozy, though sinew swung rhythms and a great gnarly bass tone provides a rapturous temper to that cosmic inebriety smothering ears.

The blues infested rock ‘n’ roll tempest of Passing Through gets ears excited all over again, its feisty swagger courting a virulent catchiness driven by tenacious rhythms and swinging grooves matched by the Ozzy-esque vocal temping of Russell. The track is irresistible, taking a great first impression of the album up another notch with its flirtatious enterprise and anthemic dexterity of music and craft. As across the album, there is something familiar to the Desert Suns sound but a hue only adding to the lure of its bordering on mischievous revelry.

A breath is allowed to be taken by the blues croon of Ten Feet Down as ears feast on a new twist in the landscape of the release. Blues and country rock merge to serenade as harmonica and guitar colour a salty portrait of suggestiveness around it, all colluding for a magnetic encounter before Memories of Home portentously pulsates into view and unfurls a lumbering beast of a stoner/heavy metal fuelled proposition. A scent of Fu Manchu meets Electric Wizard meets Kyuss looms up within the tantalising proposal, whilst mellow and soporific textures unite with the ravaging torrents stirred up by grooves and a hungry energy to create another hard to resist confrontation.

Run Through My Roots brings the album to a compelling close, its atmospheric soundscape and pungent rhythmic suggestiveness the prelude to another forceful and heavyweight enveloping of the senses. Once more romancing calms are seductive oases amidst increasingly volatile eruptions and predacious outbursts, their mesmeric caresses breaking ravenous outpourings of sound and emotion as the track offers a fascinating end to a thoroughly enthralling and enjoyable release.

Second time around, Desert Suns is not to be missed and already thoughts are eagerly turning to what comes next from the band, where they have imaginatively ventured since the creation of their album two years ago.

Desert Suns is out now through Ripple Music in North America on CD and Royal Blue vinyl and on Beer Brown vinyl in the UK through HeviSike Records with digital copies @ https://desertsuns.bandcamp.com/