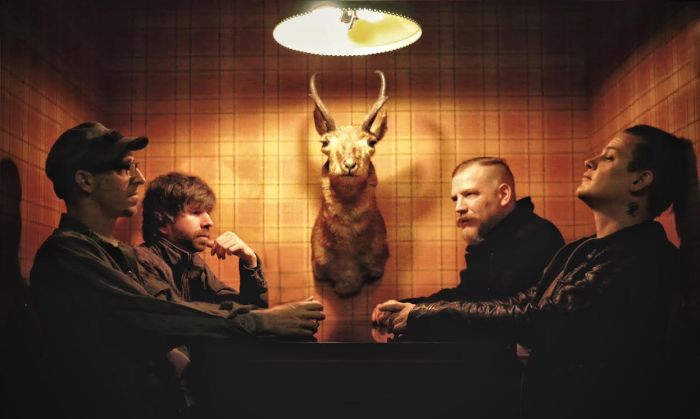 Ready for something special? Then we suggest taking a good deep listen to the self-titled debut EP from Death Valley Dreams. The five track treat is a gloriously rousing and dramatic roar fusing eighties seeded new wave and post punk with the kind of psyche/indie rock only modern imagination can conjure, and subsequently one riveting exhilaration of sonic contagion.

Hailing from Pennsylvania, Death Valley Dreams consists of long-time friends and band-mates, vocalist/guitarist Nick Coyle (The Drama Club, Stardog Champion) and guitarist/keyboardist Jon Nova (The Drama Club, An Albatross) alongside similarly established friends in bassist Ryan Dougherty and drummer Matt Rutkoski. Formed in the fall of 2015, it is fair to say that the quartet hit the ground running in creativity and an instinctive union of their talents as proven by this first release. The EP is a seriously accomplished and skilfully sculpted blaze of bold imagination and open passion leaving ears blissful and an appetite for more greedier than flies on a desert lying carcass.

Words Like Fire is the first pungent temptation of ears, the song from its first breath a swarthy flame of melodic suggestion aligned to a gentle caress. Just as quickly the instantly impressing vocals of Coyle bring a new bloom to the tempting, his alluring tones joining the potent lure into the arms of tenacious riffs and scything beats. Hitting a seriously catchy and forceful stroll blessed further by the pulsating moodiness of the bass and broader anthemic vocal calls through the band, the track simply bewitches ears as it incites bodily involvement. There is a touch of The Slow Readers Club and Original Mirrors to the encounter and China Crisis to its melodic suggestiveness but ultimately the song and in turn EP has a sound strikingly unique to Death Valley Dreams.

As equally dynamic and enticing is the following blaze of The Darker Years. The song is a flowing landscape of volatile and mellow exploits spun into another virulent hug with forceful cascades of fierce yet elegant infectiousness, vocal dexterity, and electronic revelry. As its predecessor, the track is in command of feet, hips, and emotions; its flirtatious enterprise forged in a muscular tempest of energy and vigorous resourcefulness before Turn Out Those Eyes offers its own inventive arousal of the imagination. With eighties keys gently swarming over its emerging frame, the song hits a stomping striding rhythm as vocals and guitars expressively flirt with ears, each courting a dark rumble spawned from bass, drums, and melancholy.

Fiery rock ‘n’ roll is tapped into with Take A Look At Yourself, that raw texture aligning with a lusty Futureheads meets The Psychedelic Furs carnival of anthemic celebration and contagion. The track, as so many, is simply irresistible, a puppeteer to full involvement from body and voice, and in turn the passions. The EP is one of those propositions which will not take no for an answer, and certainly had us whipped up into unbridled submission even before the closing charm lit Never Meant For Anyone adds another flavour to the Death Valley Dreams alchemy of persuasion. An emotive croon laying tender but shadow wrapped hands on ears and imagination, the track is a sombre yet warmly bright serenade with sultry sonic tendrils veining dark ambience. Emotion and drama only intensify as the song exposes more of its thick sentiment and discord, it emerging as potently rousing as the energetically incendiary exploits before it.

Simply superb, the EP is an early major highlight for 2016 from a band with the potential to turn the music scene on its head. The name Death Valley Dreams may have connotations of desolate and lonely times, and lyrically some songs seem to have a similar seeding, but the music is anything but bleak or cheerless. A must have proposition.