French band Heartlay made their introduction with the well-received debut EP Injection just over a year ago and fair to say their imaginative blend of industrial and melody rich metal sparked potent reactions and words. Now they have followed it up with an even mightier exploit in Remedy, a five-track EP continuing the band’s experimental merger of rich flavours. The band is still working towards their wholly unique sound but whilst showing a realisation of some of the potential impressing within its predecessor Remedy taps into fresh promise which forcibly suggests the Parisian quartet is an exciting prospect to watch.

Formed in 2014 by vocalist/composer Aaron Sadrin, Heartlay quickly finalised its creative strength with guitarist Johan Laë (ex-Moven.S), bassist Flo Lemonnier (ex-Kera, ex-Thanatic Eyes) and drummer Loïs Arnaldi (of Irradiance). As mentioned Injection quickly put the band on the radar of a great many luring strongly positive reactions in turn and now building upon its base and success, Heartlay is set to spark greater attention as they explore darker and more creatively demanding essences with Remedy. Adding greater raw aggression and emotional shadows this time around whilst pushing their imagination to thicker boldness, the EP shows an open evolution which has ears suitably gripped from the opening moment of the Brett Lamas-Caldas (Tower Studio: SepticFlesh, Devin Townsend) mastered EP. 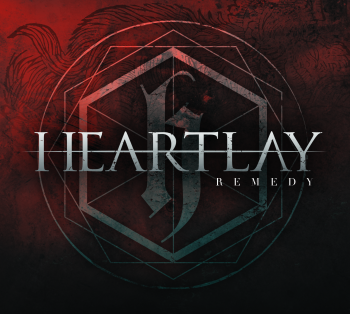 Bring You Down opens things up, the song a strenuous wall of riffs and rhythms swiftly entwined in wiry sonic enterprise and vocal expression. Its intensity and power is a commanding and forceful wind but still allowing room for the melodic prowess and inventive weave of heavy rock and steely metal textures to make their persuasion. A Gravity Kills feel with a fierce fire to it graces the seriously engaging mix as vocals seduce and roar to match the journey of the music across the impressing start to Remedy. It is a potent persuasion continuing with Consequence. The scent of Nine Inch Nails hinted at in the first is a stronger flavouring to the second song, but equally there is an element of UK band MiXE1 and Deftones at play too as it reveals its own distinctive tapestry of searing sonic endeavour and electronic exploration.

As the opener gripped ears, the second intensifies the tempting with its sonically sizzling air and dramatic character; that progression continuing as The Battle initially coaxes the senses with warm keys aligned to a haunting ambience wrapping the raw industrial core of the song. Spineshank comes to thoughts early on in the increasingly volatile and compelling track as well as a generally assumed Trent Reznor inspiration, both stirring up more reasons to enjoy the abrasively tenacious and increasingly enjoyable proposition.

Through The Window adds its creative weight to the convincing roar of the EP next, its body a perpetually twisting venture of electronic and metal resourcefulness that again seems to be another little step on in imagination and potency than its predecessor, a trend across Remedy that does it no harm.

The melancholic ambience soaked Black Walls concludes the release, its predominantly instrumental body seemingly and enjoyably seeded in eighties dark wave invention with Gary Numan and The Cure passing thoughts as the track seduces with its cold romance and inspires the imagination through its haunting elegance. It is a strong end to Remedy, offering another side to the fascinating Heartlay sound.

The EP is an intriguing and tantalising next step in the emergence of the French band. There are moments where the release seems to resist going further into the unknown or wavers in its real strengths but from start to finish, whilst leaving ears thoroughly enamoured, Remedy suggests Heartlay is a band with the qualities and imagination to make a major impact.