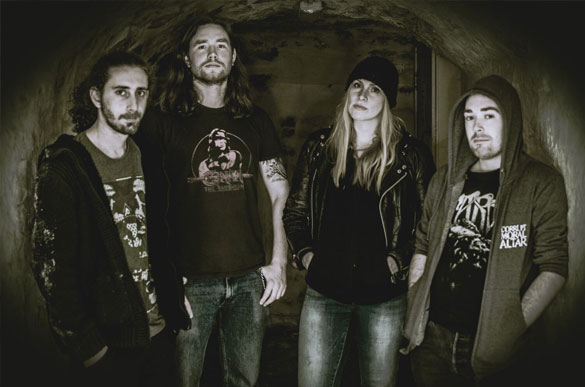 It looks like there is new sorcery in town and it comes in the shape of King Witch and their rich and thickly captivating sound. An Edinburgh quartet which only formed last year, they have provided one tasty introduction to themselves with debut EP Shoulders Of Giants, a three track roar of seventies heavy metal and classic rock with a more than flavoursome lining of stoner/doom lit rock ‘n’ roll to its body. Since emerging, the band has lured comparisons to the varied likes of Black Sabbath, Candlemass, Mastodon, and High On Fire, to which we would suggest Mount Salem and Blood Ceremony in varying degrees, but whoever is offered as a clue King Witch and their EP provide one exciting prospect and success respectively.

Consisting of vocalist Laura Donnelly and guitarist Jamie Gilchrist, both formerly of Firebrand Super Rock, alongside bassist Simon Anger and drummer Tam Dickson, King Witch has taken little time to awaken keen appetites and support for their fiery music. It is no surprise with Shoulders Of Giants, aside a well-received single, as their opening bait for ears. It has a creatively accomplished body and thick imagination which only sparks the thought that if things are this good at the start what a thrilling horizon is surely before us with them.

The powder keg of sonic fire and heavy brew of classic intoxication opens with its title track, Shoulders of Giants an initial shimmer with instant intensity and drama that only grabs attention and imagination. Gilchrist is soon spinning a web of melodic intrigue as the swiftly impressive voice of Donnelly blossoms in sound and narrative. Straight away she is a focal point but through the strength of the flavours and craft surrounding her soon the song as a whole is in command again, the rhythms springing a mix of anthemic intimidation over which the guitar casts a tonic of grooves which at times finds a Skids like tang. The track is a mighty start to the EP, full of striking textures and enterprise that alone needs numerous plays to fully explore with increasing rewards.

Full Moon King comes next, immediately seducing with its warm melodies and exotic air. The heat is raised in no time as grooves and bass resonance collude in tenacious revelry within the crisply landing frame of Dickson’s beats. The temperature and roar of the song is equally lit by the soaring tones of Donnelly but tempered skilfully by the melodic calms and elegant breezes which drift across the track’s enticing landscape between its skilfully stretched out dynamic crescendos. As much as the opener had attention eager, its successor has the appetite drooling before departing for the final track to make its claim on the passions.

As the others, the epic adventure of Lucid needs little time to entangle ears and emotional involvement in its heavy romance and sultry seduction. Vocals and spicy swathes of guitar simply caress the passions as the climate warms and boils with every passing second. Donnelly again shows her striking prowess with every syllable and musically the band theirs across very pluck of a string and swing of a stick. The finale is breath-taking, a hex all on its own bringing a thrilling release to a mighty conclusion.

There is no doubt you will be hearing a lot more of and about King Witch over coming months and with increasing acclaim and ardour if the Shoulders Of Giants EP is a sign of things to come.

Shoulders Of Giants EP is out now @ https://kingwitchband.bandcamp.com/releases