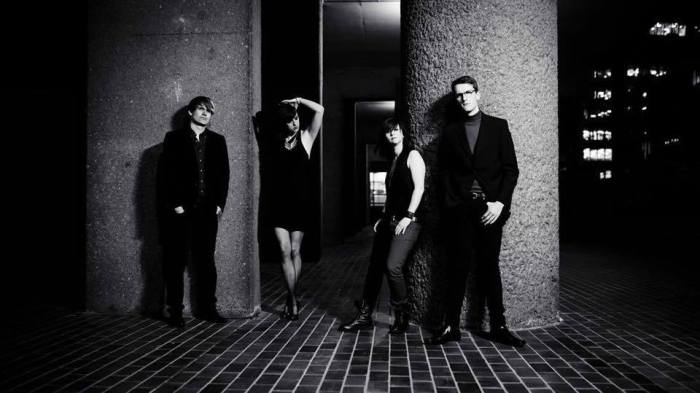 Every now and then a band comes along and just grabs attention by the balls with an almost knowing instinct on what the passions go for. For us UK quartet Scarlet Echo is such a proposition, and though their new single Emergency Exit is just one song from an album yet to be heard here, it and the band have quickly given a keen to be greedy appetite one thrilling poke.

Formed in 2012, the Essex hailing Scarlet Echo has earned a strong word of mouth reputation through their live presence and compelling sound, a buzz reaching us well before a note was heard. The past couple of years or so has seen the band share stages with the likes of Bassment Jaxx, Rat Boy, Hadouken, The Buzzcocks, The Hoosiers, and Department S, and it is the latter in their early days which new single Emergency Exit brings to mind in some ways.

Taken from An Exact Portrayal of Nothing in Particular, the band’s debut album, Emergency Exit instantly splatters ears in inviting melodic drops cast by the guitar. They are quickly joined by the dark throaty temptation of the bass, it in turned courted by the excellent and diverse vocals led by Hannah. The jangle of her and Jamie’s guitars continue to coax and excite as the rhythmic shadows sprung by Miles and the swinging beats of Alex bring further irresistible bait. There is a definite eighties hue to the post punk meets indie rock contagion seducing ears and the imagination, with that colouring of Department S, their early singles especially hinted at, coming to mind as the song hits its dynamic stride. Also though, the melodic prowess of The Passions is reminded of by the single and the darker tonal might of Au Pairs and Horse Party, a band also exciting the now, comes to thoughts too as the track continues to transfix and thrill.

Ultimately though, the outstanding Emergency Exit with a matching video, breeds a character and addictiveness solely Scarlet Echo sculpted with a need to explore their album growing in its wake, and with increasing impatience after every listen.

Emergency Exit is available now, as also An Exact Portrayal of Nothing in Particular, via iTunes.