To quote the press release of Undawn’s new album, “Justice, in its broadest context, includes both the attainment of that which is just and the philosophical discussion of that which is just. The concept of justice is based on numerous fields, and many differing viewpoints and perspectives including the concepts of moral correctness based on law, equity, ethics, rationality, religion, and fairness.” That just about sums up the fire in the belly of Justice Is, and in its individual explorations of varying aspects to the album’s theme. It also hints at the blaze of attitude, intensity, and defiance fuelling the Dutch quartet’s excellent second album. It is a proposition weaving familiar metal bred hues into fresh invention, breeding eager acclaim loaded reactions and the potential to push Undawn firmly into the strongest spotlights.

Formed at the beginning of 2007, Undawn quickly awoke local support through an adrenaline fuelled live presence and a pair of EPs, Dominate the World being uncaged that first year and The Roads To Despair in 2008. Fair to say it was debut album Jumpers which provoked broader attention, subsequently helping the band to play a torrent of shows across Europe. With Justice Is, Undawn have pushed their songwriting and sound to new ferocious heights, digging deeper into their imagination and craft to create a tempestuous weave of diverse and aggressive styles and adventurous flavours aligned to greater explorations of melodic and emotional incitement. The result is a confrontation which has ears aflame and thoughts eager to devour the provocation on offer. It may not be the most original album this year, though it is no cheapskate on fresh invention, but it is one of the most forcibly enjoyable. 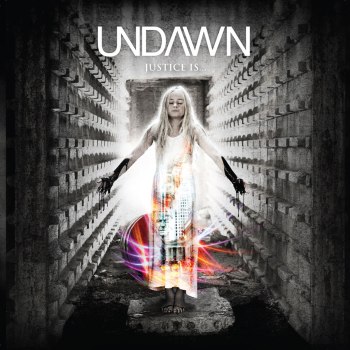 Evidence of that comes straight away with opener Coming Home. From its first breath, the track is bullying the senses through bruising rhythms, abrasive riffs, and a mass band roar driven by by the lead vocals of guitarist Michiel Brinkhuis. Instantly ears and attention, not forgetting appetite, are in fully engaged in the provocation, perpetually tempted by the swinging grooves, vocal variation, and the tenacious energy and character of the song. With fellow guitarist Leon Kloosterman and bassist Thijs Brinkhuis backing Michiel vocally to potent effect, the track continues to twist through a weave of melodic and groove metal provoked further by flavours bred in the likes of metalcore and alternative metal. It is stirring stuff igniting a greedy response. in a tremendous start to the album.

The following What Justice Is keeps the heady beginnings going, guitars rich enticement from the off with their potent coaxing quickly reinforced by the growling vocals and rhythmic intimidation of Thijs Brinkhuis and drummer Tom Brinkhuis. By the time everything is united, the song is a sprawling and welcome invasion of the senses but soon realised as only one aspect to the many faces of a song as fiery melodic endeavour and harmonic vocals, the guitars of Michiel and Leon alone a web of sonic invention, colour the tempestuousness nature of the track.

In the Moment boldly strides in next, bluesy tendrils of guitar entwining the raw air and sinew built rhythms that quickly surge through ears along with more of the increasingly enjoyable and seamlessly changeable vocals from Michiel and the band. Like a mix of Pantera, Bloodsimple, and Bring Me The Horizon, the song thrills and spills its impressive traits and imagination over ears and an already hungry appetite for the album; that only given further bait to devour by the resourcefully antagonistic A Bond of Brothers and the sonic maze of Faceless. The first of the pair is a skilful merger of venomous aggression and invasive attitude with flowing melodies and vocal charm to sooth the more grievous exploits of their counterparts whilst its successor sculpts a wiry web of sonic tempting within the mix of emotively clean vocals and gladiatorial growls. Of the songs so far, it is arguably the least unique yet there is no escaping or dismissing the sublimely aligned and merged bold contrasts and conflicting energies.

Moving On similarly only impresses even if without breaking into major originality, especially with a core groove which gets the blood and energies rushing through the body in enjoyment. The skills and adventure of the band is a constant pleasure and an impossible to ignore heart to all tracks, easily proven here by the song’s organically rousing persuasion and too in the following Forever. It opens with a mellow croon rich with the great vocal qualities within the band, continuing to retain that emotive calm and elegance even as turbulence honed walls of intensity and sound grow to frame its evocative flame. The track gets under the skin early on and like any anthem increasingly stirs up emotions with its combined melodic and bullish splendour.

Raw and thrilling hostility shapes Fate next, though of course the melodic invention of the band is a just as heady part of the thumping rampage igniting ears with a blues kissed solo especially exhilarating within the storm before Never Giving Up, which features Björn Strid from Soilwork, takes over. That essence of defiance mentioned at the beginning is especially thick in the dramatic encounter which just seems to get stronger and more compelling with each of its diversely unpredictable and absorbing five minutes, and of course every listen.

Completed by The Puppets of Heresy, another making a strong impact initially but blossoming to greater stature with each dive into its volatile ravaging, Justice Is leaves ears blissfully ringing and pleasure thicker than the grooves helping bring that success. You may have heard more dramatically unique albums this year but many that are more exciting and emotionally fulfilling it is harder to imagine.

Justice Is will be available from December 11th via Graviton Music Services.