Despite My Deepest Fear – Selfish Generation

It has been two years since UK melodic metalcore sextet Despite My Deepest Fear released their very well-received Make Or Break EP; time which, on the evidence of its successor Selfish Generation, has seen the band dig deeper into their imagination, uncap bolder adventure in their songwriting, and hone their sound into one fiercely enjoyable incitement. Their new EP is an attention grabbing protagonist, a carnivorous beast with a seductive heart as able to chew up and spit out the senses as it is uncaging an enthralment of melody rich temptation. With maybe major originality arguably not as potent as all its other aspects, the six track involvement suggests there is still the big potential of richer and more unique treats to be come from the band off of the back of this impressive encounter, that alone exciting to be honest such the impressiveness of Selfish Generation.

Formed in 2010, London hailing Despite My Deepest Fear drew on inspiration from the likes of We Came As Romans and The Devil Wears Prada in the creating of their dramatic and enjoyably invasive sound. The Make Or Break EP awoke a host of new fans and appetites for its flavoursome confrontation, its success emulating and stretched again by a live presence which has seen the band make acclaimed appearances at festivals like Breakout in 2014 and Camden Rocks this year, undertake a UK headline tour and a series of dates across Europe with Italians Hopes Die Last. Fair to say Selfish Generation has been an eagerly awaited and anticipated proposal which now here, is sure only to stir up stronger spotlights and greedy attention upon the band. 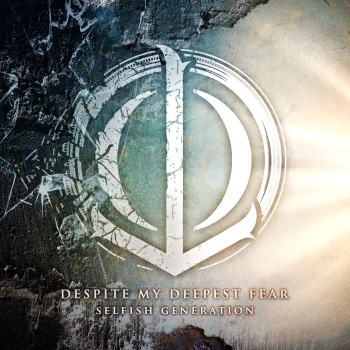 Selfish Generation opens up with its title track and indeed new single/video, immediately cupping ears in a rich emotive melody and a slightly portentous atmosphere, within which guitars weave a web of intrigue in league with the drama of keys. In no time the hostile nature of the track erupts, the stabbing riffs and spicy grooves sprung by Arron Yarrow and Olly Meager laying welcome siege to the senses along with the grouchy rhythms and harsh vocal squalls. There is a familiarity to the tempestuousness of the song but equally a fresh and individual character too which is more accentuated by the clean vocals and developing swinging gait of the track. We cannot say which of Ryan Endacott and Nick Nowak provide the coarse and mellow vocal persuasions but each is swiftly impressive and a striking texture in the roar of the track and indeed release.

The following F.Y.F continues with the shadowed air and noir toned ambience of its predecessor but sculpting its own furious and rousing incitement aligned again to flowing melodies and evocative contagion. The barbarous beats of drummer Toby Barnswarda take no prisoners to match the primal attitude of riffs, whilst bassist Julian Murray conjures an alluring shadowing to it all which perpetually grips ears and sparks further predation within the tempest. As across all proposals within Selfish Generation, it is a superbly bred and blended collusion of contrasts, the savagery intricately and seamlessly merged with creative and impassioned brutality; Stranded instant back-up of that success with its initial electronic shimmer within elegant keys subsequently overwhelmed by caustic assaults from riffs and rhythms led by the blaze of raw vocals. Nevertheless the calmer and beauteous elements are still working away, springing through the ebbs and flows of the antagonism to breathe heart spawned reflection and air into the turbulence. The track is constantly a revolving proposition, its body sweeping fluidly through its weave of emotions and enterprise to continue the mighty start of the EP.

The Repressed follows suit in design whilst creating its own insatiable theatre of power, craft, and increasing drama. It does not quite match up to the earlier successes on the release yet is a mighty lure in its inventive brutality and resourceful enticing through the melodic maze which emerges whilst its successor Infinite, unleashes a hellacious brawl with the capability of opening up moments of virulently catchy temptation. Where it wins though is in the full diversity making up these opposites, the invention blurring their lines and skilfully uniting them in one of the major peaks within the EP.

The release is brought to a formidable close by Long Way Home; Despite My Deepest Fear as now expected invading the listener with rabid energy and hostile craft, unveiling a fascinating weave of melodic and sonic imagination throughout, here with a deep rooted exotic hue and seduction to its imagination. The track provides a tremendous conclusion to Selfish Generation, a final thrilling and skilled slab of ferocity and craft.

Despite My Deepest Fear have returned with a bang, with a release which suggests they are heading towards being one of those doing the inspiring whilst providing this year with one of its most enjoyable metalcore offerings.

The self-released Selfish Generation EP is out now @ https://itunes.apple.com/gb/album/selfish-generation-ep/id1048897037