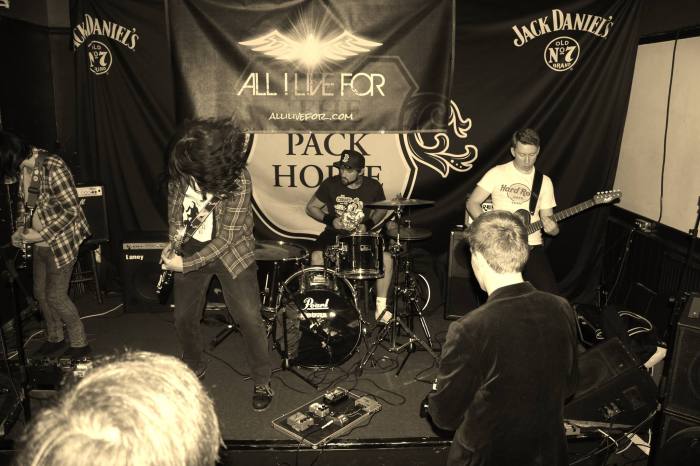 With their debut single Meniscus, UK alternative rock band Eujenics announced themselves as a potential fuelled and seriously striking proposition. It was a song bulging with emotive textures within a pungent atmosphere of provocative craft and fiery imagination; an impressive incitement breeding intrigue and an eager appetite for more. Its successor Kalashnikov has now been unleashed to confirm all thoughts and suggestions arisen about the band whilst uncovering another aspect to their increasingly gripping sound.

Hailing from Sunderland, the quartet consists of vocalist Nic Wood, guitarist Chris Hanna, bassist David Scott, and drummer Adam Hay. Since forming earlier this year, Eujenics has of course made their introduction through the September released single Meniscus and backed it up with shows at the O2 Academy and Bannerman’s, with another on the immediate horizon at Trillians. The last track’s success also saw it being featured on Nick Robert’s BBC Radio Newcastle show and listed as Amazing Radio’s track of the week, a reaction easy to Kalashnikov initially emulating before pushing things on again.

The new single opens on a delicious earthy and predatory bassline from Scott, the beats of Hay soon in tandem with a similar stalking to their presence. In no time the song is ablaze with a wall of stoner-esque, rapaciously heavy enterprise from Hanna, a melodic suggestiveness also swiftly springing from his endeavour as the enticingly volatile delivery of Wood completes the arousing incitement on ears and emotions. As with the last single, there is a raw scent of Manic Street Preachers to the encounter, and the emotive tenacity of Mind Museum, though the track is a far more dynamic and explosively tempestuous encounter which suggests possible inspiration from a Therapy? or Reuben.

The track continues to be a fire of physical and emotional angst, skilfully crafted and layered to make a thick impact from start to finish. Eujenics again impresses as they build another almost tsunami like roar of creative drama and persuasion within Kalashnikov. The band is currently working on their first EP scheduled for release March 2016, anticipation of which is now inflamed thanks to Kalashnikov as well as its previous fellow protagonist.

Kalashnikov is out now and available as a free download @ https://soundcloud.com/eujenics