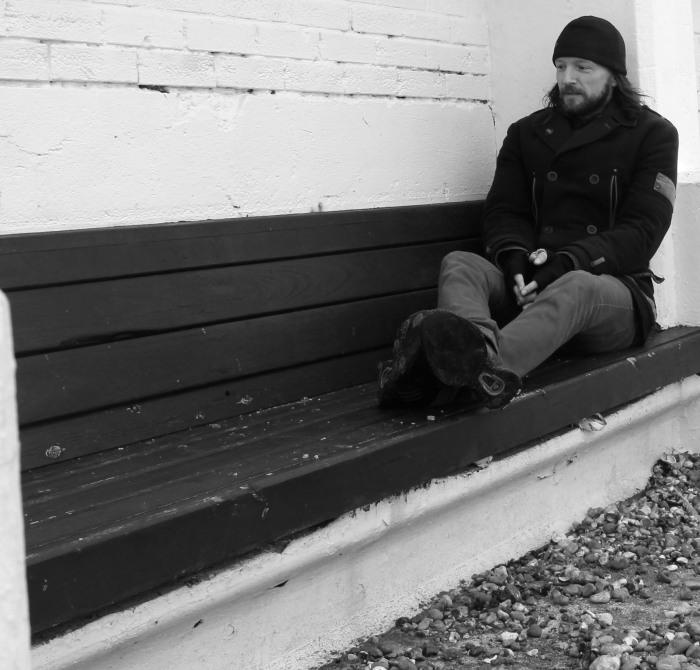 Though time wise it has been around a year between releases, it feels like a mere breath in sound and relationship between the self-titled debut Arcade Messiah album and its successor II. Continuing in adventure where its acclaimed progressive rock predecessor left off, the new encounter is an emprise of instrumental majesty and incitement reconfirming John Bassett as one of Europe’s finest songwriters, composers, and musicians.

An artist no stranger to garnering thick attention and praise through his band KingBathmat and acoustic offerings under own his name, Bassett’s solo instrumental project Arcade Messiah is another unique proposition from him. Weaving strands of highly varied styles from metal to math rock, stoner to post rock with further diverse and progressive flavours soaked in stirring ambience, the first Arcade Messiah album was a riveting exploration of sound and emotion through individual incitements. Each song worked on the listener’s senses and imagination and as mentioned, II carries on in the same vein but further experiments with textures whilst stretching the fusion of styles and essences to richer and deeper extent. Basset himself neatly sums up II, saying “after the surprise success of last year’s original Arcade Messiah album and after receiving feedback from fans of that album I decided to make a sequel, a continuation of that album, that is hopefully bigger, better, more refined and more dramatic, but which didn’t lose the vibe and atmosphere that was created on the original album“.

II opens with Moon Signal and straight away thoughts drift on the breeze of melodic and atmospheric coaxing. Keys whisper suggestively with their calm caress whilst a guitar emotively entices before sparking a broadening into a thicker and more volatile landscape. The celestial air which painted the start continues to ebb and flow within the spatial yet tightly woven invitation of the track, its journey hinting at vastness and intimacy simultaneously whilst twisting through varied realms as the song explores new avenues of calm, tempestuousness, and imagination.

As expected, Bassett bewitches and provokes ears and emotions with his writing and craft, each piece of music a tapestry of clues and persuasion for the imagination to run with greedily, Red Widow another swift example and success. The second track has a more sinister air to its tone and presence which starting from a sonic mist is soon opening up layers of equally intimidating and seductive expression. The arousal of ear and thought also evolves through many guises within the full umbrella of sonic temptation, a creative travelogue shaping all tracks with the compelling Black Dice Maze a prime example as it glides through sonic intrigue and emotive calm as well as tenacious rock ‘n’ roll and ravenous volatility within its gripping theatre of sound and invention.

The next up Gallows Way seduces from its first touch. Initially it is a surf rock infused ambient hug on the senses, soon spreading out with evocative melodies and reflective sonic shimmers as guitars and keys align with shadowy but restrained rhythms. The skills and invention of Bassett across the instrumentation is a perpetual doorway into the heart of the music, guitars especially descriptive and suggestive across the album but just as potent are the rhythmic contrasts and darker hues that can either ripple or erupt in more forceful intent to temper or enhance the adventure around them. In the fourth song beauty dominates though whereas Fourth Quarter involves rugged scenery of riffs and dynamics within a sonic radiance which immerses the listener with a climate of invitational sultriness and tempting danger. The track is a gripping fascination and rich aural temptation matched in might by the sultry mystique of Via Occulta. The short piece is a maze of shadows, a lure into secrets and hidden depths, and a spellbinding flight even with its brevity.

Across both Read The Sky and Start Missing Everybody, artist and album continue to be a kaleidoscope of aural ingenuity and temptation; each of them evocations which transfix and incite the senses and imagination into unique interpretation of the sonic palette on offer. The closing pair of the two is a melancholic kiss but just as potently fuelled by hope and energy to create something emotionally anthemic.

The CD version also includes the bonus track The Four Horsemen, a striking cover of the Aphrodite’s Child song which was also Arcade Messiah’s contribution to the recently vinyl released compilation album by Fruit De Mer Records called Side Effects. Alone it is worth the purchase of a CD, Bassett giving the track fresh life and suggestiveness, though the cream of II is undoubtedly his original and thrilling tracks.

John Bassett as mentioned is for us one of the UK’s most potent and stirring songwriters, let alone musicians, and II another thick slice of pleasure.

Arcade Messiah II is out now digitally as a name your price download @ https://arcademessiah.bandcamp.com via Stereohead Records and on CD from November 27th.

Like Loading...
‹ Steve Young – Hold Me Close featuring Gemma Mewse
Gazing into the fresh glow of The Cathode Ray with Jeremy Thoms ›