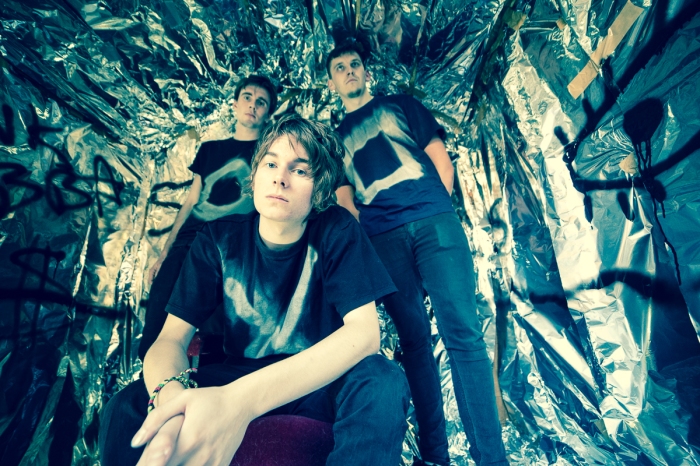 There was without a doubt a rich twinge of intrigue and anticipation when UK rockers False Heads got in touch about a new single coming out. It was a surge of excitement inspired by memories of the band’s still impressing and thrilling previous pair of EPs and soon fiercely lit again by the actual rousing temptation of Steal and Cheat itself. The single is a thumping stomp of indie rock tenacity amidst grouchy rhythms and punk seeded invention; a track which whips up ears and enthused involvement as easily as it awakens a greedy appetite for more.

East London bred False Heads made its first steps in the opening month of 2014 and quickly began enticing attention and whipping up a loyal and quickly increasing following. Around the summer of that first year, the trio released the Tunnel Vision EP, a rousing quartet of tracks more than doing its bit to lure further and greater focus the way of the band. It also provided a strong base from which the band could expand and explore its songwriting and sound, and that they had by the time its successor, the Wear and Tear EP, had leapt into ears this past April. Whereas the first encounter was a grunge hued affair, its successor revealed a dirtier and heavier rock tempest to its enterprise and invention. Steal And Cheat shows another strong twist in sound from those before it whilst carrying the increasingly distinctive False Heads character and voice.

Steal and Cheat is quickly into its punk ‘n’ roll canter, the guitars and rhythms colluding in a boisterous canter as the trio of Luke Griffiths, Jake Elliott, and Barney Nash get to work on the imagination with theirs. This time around, the threesome weaves a more restrained and minimalistic proposal of, as suggested earlier, indie and punk enterprise bound in a wind of virulent energy and vocal revelry. The bass is a hefty lure, its throaty swing and presence a cantankerous incitement alongside the sonic web of guitar and the invitingly anthemic vocal delivery. With the drums leading the tempting, it is fair to say that everything about the song is an incitement of catchiness though, and increasingly irresistible over its length and every play.

Like a fusion of Houdini, The Vibrators, and Libertines, whose Gary Powell releases the single on his 25 Hour Convenience Store label, Steal And Cheat is instinctive manna for the ears and easily the finest track from False Heads yet.