Starting with the band name, Saint[the]Sinner weaves a thick web of temptation and drama that simply devours ears and imagination from within new EP Masquerades. The UK sextet are beginning to be renowned for casting tapestries woven with theatrical post-hardcore, melodic metal, and contagious pop rock, to simplify their sound. Their reputation in turn has grown by the year since forming in 2011 but after Masquerades it is easy to say that Saint[the]Sinner have stepped onto a new plateau and are ready to embrace the richest spotlights.

The past two to three years has seen the band share stages with the likes of Crossfaith, Bullet for My Valentine, and A Day To Remember amongst great many as well as play the Warped Tour in 2013 and Takedown a year later. 2015 has been no less busy for the band, culminating in the release of Masquerades, which Saint[the]Sinner recorded with and was produced by Romesh Dodangoda (Bullet for My Valentine, All Time Low, Bring Me The Horizon). The six track adventure of sound is pure magnetism and though arguably its contents bask more openly in inspirations than the band’s previous songs, it has only resulted in the most unique and exciting offering from the band yet.

Rich in the scent of bands such as My Chemical Romance, Panic at the Disco, Avenged Sevenfold, and Fall Out Boy, Masquerades is a perpetual torrent of creative adventure and imagination soaked in instinctive drama, as shown by the opener Theatre Of Broken Dreams. From its initial music box like melody the song holds court, swiftly throwing open the door to muscular rhythms and ravenous riffs as a two prong vocal attack spreads the emerging narrative. The raw squalls of Lukey Juan are uncompromising but superbly tempered and accentuated by the excellent clean tones of James Laughton, his impressive presence similarly illuminated by the enjoyably rabid delivery of Juan. With that first starting touch of symphonically laced keys still flirting within the intensive blanket of invention and sound, the track relentlessly twists and turns, its volatility seeded in a maze of styles and compelling imagination. Those early references are a vocal colour to the song, but as suggested, clear hues in something original and creatively vaudevillian to Saint[the]Sinner. 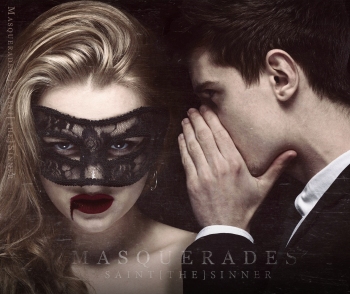 The outstanding start is followed by First Blood, another ferocious mesh of rich flavours and varied styles honed into something distinct to the band. Keys appeal early and again get smothered in the thick tide of sound and atmosphere but still continue to lurk as the guitars of Pash Stratton and Billy Muircroft evolve through seduction and predation, matching the vocals simultaneously. Whiffs of Muse and Bullet for My Valentine also drift across the tempestuous wave of multi-coloured sound, as the track creates an enthralling invitation impossible to refuse.

The next up Left For Dead revels in more pop rock scenery for its vibrant if still intimidating start, virulence instantly flowing through the magnetic proposal, especially in its Fall Out Boy like infestation of a chorus. The bass of Tom Bigg is a growl of shadows whilst drummer James Booth scythes through the air with instinctive intensity to match the contrasting grouchiness of Juan’s vocals. Along its thrilling length, the keys spread symphonic evocation whilst the guitars write their own dramatic persuasion within another striking proposition within Masquerades.

She’s a Vampire is the same, every element seeming to have its own story going on within the total play of the track, but all uniting with fluid and resourceful craft for one riveting croon come storm of emotion and sonic adventure. Across the EP, Laughton increasingly impresses with his expressive and potent tones, they the more dominant presence here, but that is something easy to say for all members as each song stirs up ears and appetite with zeal and a prowess of dramatic invention.

The EP comes to an end through the irritably imposing Set It Off and finally the alluring labyrinth of Asylum. Both tracks show another shade of the sound and songwriting of Saint[the]Sinner, the first of the pair entangling metalcore seeded savagery into its blossoming landscape of post hardcore and melodic metal theatre. Its successor also opens, as the first song on the EP, with a haunting melody, quickly casting a cinematic theatre of hooks and enterprise which is soon caught in the claws of rapacious metal and vocal ire, that in turn revolving within a melody honed calm and symphonic mysteriousness; all elements in league with each other from thereon in to masterful and gripping success.

It is a mouth-watering end to an equally mighty release. If the likes of the aforementioned My Chemical Romance, Panic at the Disco, and Avenged Sevenfold do not do it for you than maybe Saint[the]Sinner might be a proposal that lacks something but as said, the band takes all flavours and turn them into their own continuing to grow and impress body of invention so for all they are worthy of a listen. The bottom-line is that this is a band with the potential to go really places, and soon so do you want to miss out?

The Masquerades EP is out now @ http://saintthesinner.co.uk/shop/