The Silverblack – The Grand Turmoil 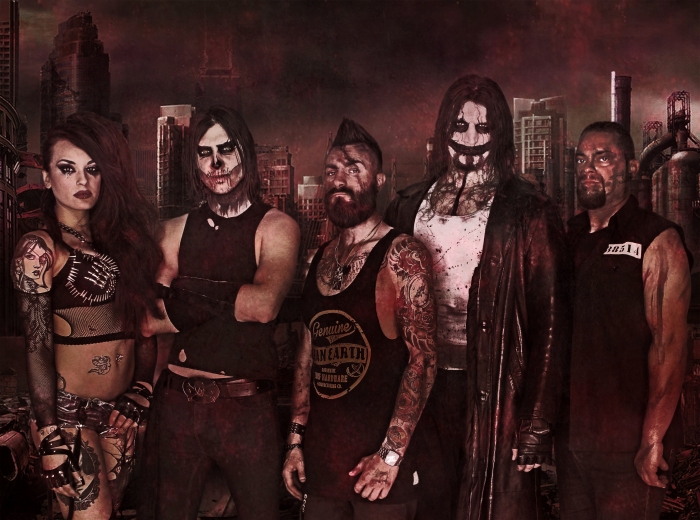 Starting with a core blaze of industrial metal and twisting and stretching it thereon in by infusing a horde of rampant flavours, styles, and waves of imagination into its roar, Italian rockers The Silverblack have come up with one thoroughly enjoyable trespass of the senses in The Grand Turmoil. The band’s new album is a physical and creative holler of sounds, new and familiar, that captures the imagination and exhausts the breath across a volatile landscape, and though it might be pushing it to say that The Grand Turmoil is the best industrial metal incitement this year, it is firmly amongst the leaders in pure enjoyment.

The Torino hailing band is the brainchild of multi-instrumentalist and producer Alessio Nero Argento (NeroArgento, The Stranded) and vocalist Claudio Ravinale (Disarmonia Mundi, The Stranded, 5 Star Grave), the pair forming The Silverblack in the opening weeks of 2014. Live the band becomes a quintet with the addition of bassist Ivan King, drummer Rob Gaia, and keyboardist Nisha Sara, but for the album it is the founding duo exploring ears and their own invention alone with just a couple of guest solos for extra spice.

It opens with its title track, a stomping beast of a proposal with a sonically fetid atmosphere and pulsating electronic scenery crowding a stalking gait. It is immediately intensive and busy on the senses as the band springs a trap of agitated rhythms and great fiery and openly varied vocals, the raw emotive roars of Ravinale balanced skilfully by cleaner tones courting their confrontation from the background. With keys and guitars jostling for attention, each getting equal share as the track casts its maelstrom of adventure, the song makes a dramatic and heftily alluring start to The Grand Turmoil, though bigger and bolder things are on the horizon. 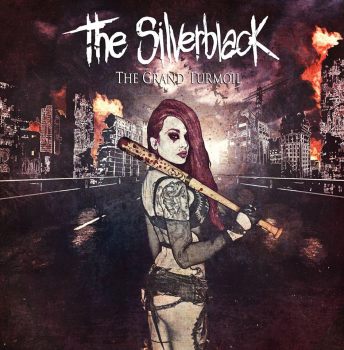 The following Anymore with its vibrantly lighter breath and shadowy presence follows and if not one of the bolder tracks certainly whips up ears and appetite with its Dope meets Celldweller parade of electronic enterprise and vocal magnetism. It is not a song stretching the imagination or finding major originality but it does leave an energetic satisfaction and hunger behind which the outstanding King-Size Vandalism pounces on with virulent and ravenous prowess. Bursting in with robust rhythms and a joyfully warm melody, the song becomes a boisterous romp sizzling with the energetic tenacity of a Pendulum and grouchier lilt of a Combichrist, whilst vocally variety reaps a slight scent of Marilyn Mansion at times. The track quickly infects feet and emotions; it’s an electro rock anthem soon having the body bouncing as high as its own.

Retaliation comes next, its immediate heavy predacious gait a thick intent that defies the effort of the keys to lighten the ambience and mood. Nevertheless they shimmer and tempt engagingly as the song prowls through an early Rammstein leering towards an electro pop chorus. The band’s eagerness to venture into unpredictable turns and styles is a stirring quality in the album but for personal tastes not as potently impacting here with the track’s ‘nice’ pop essences, though it does not stop ears being more than content overall and ready to leap on the kaleidoscope of sound and light that is Make It Worth The Grime. Dirty and melodically glowing, the song is a great fusion of dark and light that loosely comes over like a meet up of Hanzel und Gretyl and KMFDM yet sculpts its own identity along its compelling length.

The fiercer tempest of As Good As Dead raises the levels of addictiveness next; its blended contrasts of emotive rapacity and antagonistic sounds with vocal harmonies and warm infection a perfectly crafted union whilst Attic Hime straight after quickly eclipses it. With a great vocal weave within a climate which at times is like a still warm melodic day and in other moments a blustery sonic wind that ebbs and flows to distort and enhance the drama of the song, it provides an ever evolving and constantly gripping parade of diverse sound. The track leaves ears on a lofty high; a plateau extended by the blistering examination of Pyromanservant, a track drawing on as broad a canvas of metal as it does electronic invention. Like Die Krupps, Powerman 5000, and Skinny Puppy blended, the song incites and engrosses as it takes top song honours within The Grand Turmoil.

The initial gentle shimmer of Great Expectations allows a catching of breath before it too uncages a dark and contagious theatre of emotion and enterprise, an angrier and bitter version of Gravity Kills coming to mind as yet another excellent and lingering encounter within the album exciting ears.

The release is brought to an end by firstly the pleasingly sonically thick and physically volatile Might Get Worse Before It Gets Better, a song brawling with the senses as it lays down its ultimately successful persuasion, and lastly Fragmentary Blue, the darkest, most melancholic offering on The Grand Turmoil and one of the most forcibly compelling even as its departure leaves a sense of unfinished business. It is a fine end to a richly enjoyable offering which as suggested has all the invention and adventure to be, for a great many, deeply entrenched amongst their favourite 2015 industrial releases.

The Grand Turmoil is out now via Sliptrick Records.