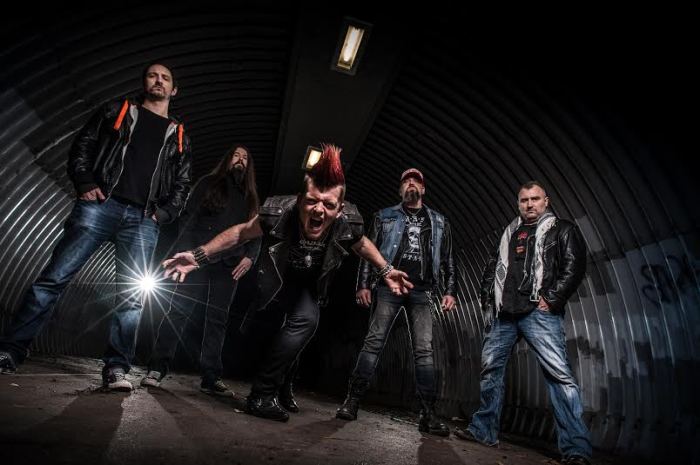 Scratching around for a powerhouse of rock ‘n’ roll to get down and dirty with? Then UK rockers Stormbringer and new album Blood And Rust should undoubtedly be your next port of call. The eleven track stomp is a thrillingly explosive and inventive blaze of heavy metal and riff fuelled rock, a creative ferocity weaving elements of enticing familiarity into broad roars fresh and distinct to the Northampton quintet. Most of all though, Blood And Rust is one thickly invigorating triumph from a band ready to stand alongside and indeed outshine the big boys.

The beginning of Stormbringer goes back to 2011 with members of Deadeye, Nekkrosis, and Viking Skull meeting for beers and music talk. Soon guitarists Ash Smith and Dom Wallace were recruiting drummer Jon Paul Quantrill and bassist Darren McCullagh to their new project, and from jamming and writing to recording had within a year created enough songs to fill an album. Now a vocalist was needed and in the winter of 2012 Mike Stockley joined the band, he soon laying down the vocals for debut album MMXIII, which was released the following July. The next years saw the band playing reputation building and acclaim earning shows which included appearances at Download and Bloodstock on its main stage. Due other commitments, Stockley had to eventually leave Stormbringer with his replacement subsequently coming in the shape of ex-Burn City Burn frontman Jimi Brown. Skipping forward over a haul of months, and we have the release of second album Blood and Rust, an encounter announcing Stormbringer as a valid protagonist to lead muscular British rock ‘n’ roll.

Blood & Rust opens with its title track, a brief emotive instrumental hinting at the imagination with its winding melodies and eventually climatic air. Building tension and drama, the piece evolves into the tempest of No Redemption, a rampaging devilry of swinging grooves and thumping rhythms aligned to rousing riffery and the instantly impressing tones of Brown. It is an adrenaline fuelled incitement empowered further by the appetite coaxing craft of the guitars; they courted by the rousing quality of rhythms and vocals. Already neck muscles and eager attention are subservient to the release, Rise tightening the chains with its predatory yet inviting mix of tenacious riffing and a rugged confrontation of grouchy bass and sinew driven drums. A shadowy backing vocal adds to the lure of the song too, adding great shade to Brown’s delivery and the virulent contagion gripping ears from within the magnetic storm.

The following Bad Blood has a slightly more even temper to its character, though it does not skimp on creative aggression and muscle honed infection under the thick lure of Brown, he backed by great band shouts. It is fair to say that every song within Blood And Rust is an anthem in their own particular way, with this fourth track one of the most vocal and inescapable persuasions on body and voice of the listener before it makes way for the darker hues of Unto Me. The sound of McCullagh’s bass is almost bestial in tone, an early tempting still holding the keenest of attention as the guitars spin their web of imposing riffs and spicy grooves. Less forceful than its predecessors in urgency and energy, the song builds its own brand of intensity veined by rich melodic enterprise and imagination bringing more classic rock essences to light up its body.

Ashamed uncages a more boisterous and heavy intent next, its body still under a rein energy wise but making up for it with an invasive weight of sound lined with jagged scenery of riffs and beats. Brown again excels as impressively in voice as the music crowding his delivery, its ravenous intent and stalking gait a perpetual maze of invention and imaginative twists culminating in a superbly addictive finale. The track is outstanding, overshadowing its successor No Return, though it too is soon sparking full enjoyment and involvement with a somewhat familiar if indefinable design to its chorus and grooves, a success matched by Off the Edge straight after. Another track which prowls the senses, even with its elevated energy, it casts a maze of stirring endeavour and fiery catchiness that simply means involvement in its cause is instinctive. With a highly pleasing drift into a melodically haunting passage skirted by almost rabidly hued rhythms and riffs, the song enthrals and whips up the passions, a success even more intensive in Cross to Bear. The track is pure rock ‘n’ roll; from its first breath slavery of wiry grooves and punchy beats held in the grip of Brown’s vocals. Smith and Wallace transfix with their whirling tendrils of craft whilst Quantrill has senses reeling with his wicked strikes, every element of the song woven into a leviathan of an anthem infused with sonic seducing and melodic invention.

As if drawing on all the fascinating qualities within the songs before it, the seven minute croon of Voice of Demons is Stormbringer revealing all their variety of sound and resourceful imagination in one potent temptation. Catchy and reflective, melodically gentle and physically robust, the song is a glorious roar epitomising the band’s skill and invention whilst expanding the impact and depth of Blood And Rust yet again.

The song would have made the perfect high to end on but Stormbringer have one final treat in a cover of Talking Heads classic Psychokiller. A well covered song with let us be honest, only a few having been able to do it justice in their own style before, Stormbringer join that small number of real successes with a grouchier and far more fiery interpretation. They give it a full-on rock ‘n’ roll makeover without losing the core psychosis which has made the song a major inspiration, coming up with one mouth-watering version as a result.

Blood And Rust is Stormbringer at another new level of sound and presence which in turn ignites a new fire in the UK rock/metal scene for the year. It is a gem and really there is no excuse for any fan of either flavour not to go treat themselves with it.

Blood And Rust is out now digitally and on CD via Attic Records @ http://atticrecordsuk.bigcartel.com/product/stormbringer-album-cd-blood-rust