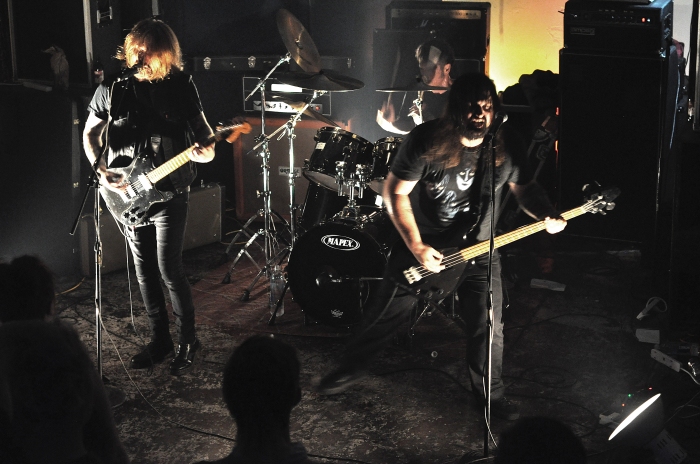 There are some releases where it is difficult to imagine anyone not being gripped by their proposals and such a triumph is the new self-titled album from US metallers Curse of the North. It is a beast of instinctive and addictive virulence that blends the ripest essences of heavy and classic metal with the muscular invention of modern rock ‘n’ roll. It is an encounter which seems to hone in on personal tastes, taps into the psyche to discover its deepest pleasures and then unleashes them across eight rigorously rousing encounters. Quite simply it is one of the most invigorating albums this year to set ears and passions alight.

Born in Seattle, Curse of the North currently consists of vocalist/guitarist Christiaan Morris, former 3 Inches of Blood member Nick Cates on bass, and Burke Thomas of McKagan’s Loaded and Vendetta Red on drums. Formed in 2010, the band has toured and shared stages with the likes of Red Fang, The Sword, Eyehategod, Destruction, Death Angel, Lord Dying, Valient Thorr, Kadavar, The Shrine, and Gypsyhawk whilst 2011 saw the release of their Matt Bayles (Mastodon, The Sword, Botch) produced first EP Revelations. A few line-up shuffles have also been part of the band’s growth which now unleashes Curse of the North: I. Produced by Morris and mixed by Kurt Ballou (Converge, High on Fire, Toxic Holocaust), with mastering undertaken by Ed Brooke, the album leaps on the listener from its first moment, the opening and every subsequent breath a roar of thick temptation.

Sleep While You Can is the first slab of persuasion, its start alone pure magnetism as Thomas creates a web of rhythmic arousal to set things in motion. Flames of guitar cross the compelling drum bait as the vocals of Morris spring their own enticing, a Glenn Danzig flavouring lining his tones and equally the shadows within the emerging tenacious metal canter of the track. Classic metal hues dance on ears too as a modern fusion of riffs and hook laded enterprise courts the imagination, the result being one terrific groove veined stomp. 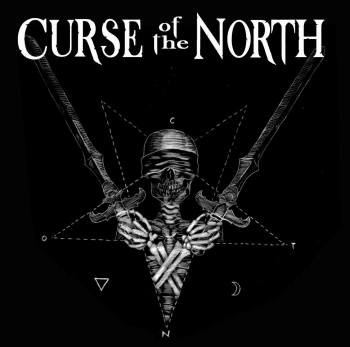 It is a mighty start taken another level by Wheel of Swords, another track with an irresistible start to its creative alchemy. A great nagging from riffs as rhythms tumble vivaciously coaxes ears first, their lure replicated in varying tones as sterner grooves and muscular predation swiftly looms up with the again potent vocals of Morris at their helm. Like Black Tusk meets Baroness with a spicing of Sabbath and Clutch to it, the song has energy and pleasure in its hands with quick ease, handing over an exhausted and rapturous body to the following Into The Trees and its mellow climate around melodic prowess. Keys emotively caress as the guitars strokes the senses with elegant suggestiveness to match the melancholic voice of Morris. The first half of the song is wrapped in this mesmeric beauty, its second a rugged landscape of again incendiary rhythms amidst tangy classic metal/rock endeavour and striking vocals.

As good as everything is to this point, the best song on the album in The Tower eclipses it. Building up its intensity and hunger through early scythes of sound, the track quickly releases its handbrake and charges through ears like Therapy? on steroids. Its torrent of riffs and ravenous hooks storms the barricades like a transatlantic cousin to anything on Troublegum from the Northern Ireland trio, its contagiousness and vocal furor similar whilst creating its own uniquely irresistible tempest. The song is breath-taking, seemingly knowing where the personal sweet spot is and hitting it relentlessly, even when slipping into a dark theatre of sinister gothic intrigue.

Thomas is rhythmically imperious on the track, as everywhere to be fair, continuing his enslaving web of craft in The Electric Wall and especially the outstanding Blessed Burning. Morris and Cates are an equal incendiary match though as the first of the two tracks sees the band creating a High on Fire/Kyuss like mountain of creative tenacity and heavy rock ‘n’ roll seduction whilst its successor, from another hypnotic rampant rhythmic trap, strolls across Queens Of The Stone Age/ Mastodon toned terrain of sonic and vocal passion. The references given across all songs are mere colours in something distinctly Curse of the North, especially emphasized when as here the guitars spin a bluesy imagination as an intimate atmosphere soaks the song.

Oceans Rise lowers the intensity if not the emotive temperature next, well certainly for its opening moments as soon it too is a cauldron of thickly jabbing beats and sonic ferocity. Along its riveting length, the assaults and aggression ebbs and flows to fluid and powerful effect, the song an undulating roller coaster of a confrontation which, as the album, just gets richer and more imposingly enjoyable over time.

The album comes to an end through the sultry blues/surf rock seducing of Faceless Killers, a sonic and melodic bewitchment which too only blossoms to greater heights with every partaking of its sweltering, increasingly volcanic landscape. It is a stunning end to simply one of the major treats of 2015; a leviathan of rock ‘n’ roll to get seriously lustful over.

Curse of the North: I is out October 23rd via Static Tension Recordings.