As much as the melodic enterprise and accomplished brutality of Under The Deep breeds major satisfaction it is the rabid gnawing of the senses from start to finish of each and every song which sealed the deal for ears and thorough enjoyment of the new album from Canadian melodic death metallers [Evertrapped]. It was the ebbing and flowing but persistent underbelly of the album which caught the imagination and appetite most securely, it in turn allowing the craft and invention of the band to create their absorbing narratives over and around it. The result is a release which might not turn the metal year on its head but definitely gives it another highly pleasurable and flavoursome kick.

The Montreal-based [Evertrapped] first emerged in 2007, its name intentionally written with enclosed brackets “to signify the trappings of modern life for all of us and how people, despite their best attempts to break out of the mould are still affixed to a simple controlled existence and futility.” Consisting of guitarists Frederick Dupuis (ex-Daggerfalls) and Vincent Benoit, drummer Eric Lemire (ex-Apocalypsys, ex-Ice Castle), bassist John Yates (ex-AraPacis), and vocalist James Brookes (ex-Ammonia, ex-One Final Moment, Continuum), [Evertrapped] has earned a formidable reputation for their live presence which over time has seen them share stages with bands such as Kittie, Deicide, Cryptopsy, The Catalyst, The Agonist, Slaves On Dope, Dark Century, BornBroken and numerous more. 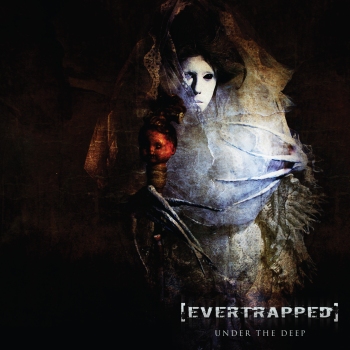 2010 saw the release of debut album Tales From The Supermax, with its successor The Anomaly unleashed two years later. Now the band has uncaged the primal yet precisely sculpted ferocity of Under The Deep on the senses, its exploration that “of the deepest reaches of human madness. Not clinical madness, but simply the darkest regions of the soul and the blackest part of the human heart from a mind found to be socially functional, but is really way too far gone. And thus it seeks to explore what is underneath the deepest depth, hence no matter how deep you descend there’s always another layer that can be torn away.” As suggested earlier, physically and sonically it shows no mercy or restraint but lines and veins its hostility with a nest of writhing grooves and atmospherically wrapped melodies that not so much temper the tempest but give it fascinating substance and drama.

From the dark ambient intro of […], the album explodes with Arise From The Ashes, its violent roar set up by the climatic voice and bedlamic finale of its predecessor and quickly ravaging the senses with antagonistic nostrils flared and predatory recriminations spewing from the guttural ire of Brookes. With that great unrelenting nagging at the heart of its storm, the track explores a web of sonic endeavour cast by the guitars and marshalled by the barbarous incitement of bass and drums. It is an enjoyably formidable start matched by the even more vocally rapacious and musically carnivorous Underneath The Deep. Like the raw soundtrack to a vicious version of the movie Falling Down, provocation sparking a game changing reaction, the song twists and swirls like a malicious dervish as again trails of melodic vapours and sonic imagination add to the creative tapestry holding its own to captivate ears and imagination in the throes of the fury.

From one highlight of the album to another as Palace Of Injustice in similar vein but with its own character, bullies and entices in equal measure. The band has been compared to the likes of Arch Enemy, Unearth, Whitechapel, Soilwork, and The Black Dahlia Murder, and it is easy to hear why across this magnetic offering alone, suggestions again backed by the blistering lyrical and physical causticity of Hypnotized By Hatred. A song themed by the scenario of relentlessly being told one is worthless until it becomes belief; it is a torrent of intensity and rhythmic pressure which seems to return after each evocative melodic turn with even greater animosity and violent craft.

Fair to say each track, and the album, has much more in their depths than seemingly shown at face level, a wealth of textures and resourceful individual and united invention which needs time to find the light. The rewards in turn are plenty as proven by the excellent Blood Of The Fallen. One of the more immediate thick persuasions and thus another pinnacle of Under The Deep, it too still reveals over listens skilful nuances and contrasting hues to its corrosive bellow to become only more compelling over time.

Both Lethal District with its virulent swing within a dystopian savagery and the middle finger defiance of Burning Through Vengeance keep ears and appetite full and fiercely content whilst Reaper ignites an eventfully searing blaze of attitude, emotion, and sonic temptation boiled up into a torrential onslaught of whipping beats and carnal riffs. Entwining it all though is more of the tantalising craft of Dupuis and Benoit, their weave of suggestive melodic toxicity and erosive endeavour framed perfectly by the ruggedly rousing bass lure of Yates and the scything swings of Lemire.

The album concludes with Embrace The End, a final tsunami of spite with a no punches pulled reflection driven superbly by the continually impressive diversity and emotion of Brookes’ vocal delivery. The song is an enthralling and exhausting close to an album which just seems to blossom further with every dive into its heart. You, like we suspect many, may have yet to focus your attention on [Evertrapped], but it is a missing out easily remedied by a long look at Under The Deep.

Under The Deep is out now digitally via Hellstorm Recordz and @ https://evertrapped.bandcamp.com/album/under-the-deep