Speaking in Shadows – The Anchor EP 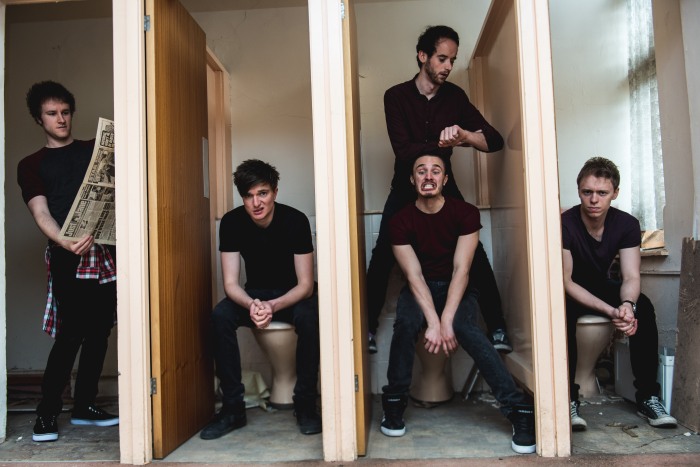 In describing their new EP The Anchor, UK alternative rock quintet Speaking in Shadows said “This EP has taken us back to our roots – no agendas, no concepts, no gimmicks. We’re writing music that excites and inspires us, and hope that our songs will not only engage and entertain our listeners, but also empower and encourage them to find inspiration of their own.” What they forgot to mention was that they have also bred a new oomph in sound and delivery which whilst indeed offering essences which at times seem closer to 2011 debut album Standing at the Edge than previous EP The Lies We Lead, comes with a core maturity and power fuelling a whole new freshness to get close and personal with.

Hailing from Nuneaton, Speaking in Shadows have been building up a potent following and praise for their sound and live presence since emerging. Comparisons to bands such as Funeral for a Friend, Deaf Havana, and Mallory Knox have come their way whilst Standing at the Edge and the single Sweet Gemini began the flow of acclaim presenting itself to their releases. Last year’s The Lies We Lead EP pushed things on again with its gripping single Technicolour Trainwreck included on Keep A Breast UK’s Check Your Selfie album, with the likes of Four Year Strong, Finch and Man Overboard. Now the band has stepped up with a new collection of tracks which feel stronger, sound bolder, and persuade with the most accomplished craft from Speaking in Shadows yet.

The Anchor opens up with new single Capsized and a rousing blaze of guitar and rhythms to seize the attention of ears and imagination. A slight breath is taken as the instantly impressive tones of vocalist Adam Smith join the flirtatiously groaning bass of Sam Powell, their tempting soon aligned to more melodic flames cast by the guitars of Ali Carvell and Lewis Sketchley. With a resourceful and eventful adventure shaping its body and gait, the song as it grows, becomes gets more contagious with very passing twist to a fluid vocal and musical roar.

It is a great start backed just as enjoyably by Scatter. Led in by the magnetic beats and swings of Grant Sketchley, the song is soon unveiling its own emotive and hearty bellow loaded with soaring harmonies around the core delivery of Smith. Again the bass is a rich lure and companion to the fiery textures bred by the guitars, they only adding rich hues to the irresistible anthemic drama and tenacity boiling within the track. It is an emotively volcanic property which similarly veins Figure of Eighty, a more reserved but no less melodically and creatively pungent proposal than its predecessors. As it engages ears, the song bares its creative heart and emotion with increasingly intensity and prowess, that earlier talked of new spark and power in the band’s sound as ripe and forceful as anywhere upon The Anchor.

Bite growls and swings in ears next, barbed hooks as open as melodic temptation and the ever inviting tone and mix of vocals. Rhythms align more to the song’s grouchy side whilst sonic enterprise fans the melody honed fire burning brightly within an encounter which maybe took a couple more plays than other songs within the EP to ignite the same kind of reactions but certainly gets there in the end. The same can be said of And Grit which also is a more of a smoulder than instant incitement on welcoming emotions but grows into a lusty furnace of heated persuasion shaped by technical imagination and striking individual craft.

The Anchor closes with Easy for You, a track swiftly laying down a spicily tempting hook around which melodic elegance and rhythmic restraint sparks an evocative air leading to tenacious crescendos. The ‘weakest’ song on the EP, yet one that only lingers after departure whilst leaving emotions broadly smiling with satisfaction through a dynamic weave of sound and creative colour, it emphasizes the core strength of The Anchor and the new step in the Speaking In Shadows invention.

Speaking In Shadows impressed with their earlier releases but without doubt have hit a new peak with The Anchor. They are still not a band which you would suggest has come of age yet though which makes their potential and future even more exciting based on the strength of this impressive EP.