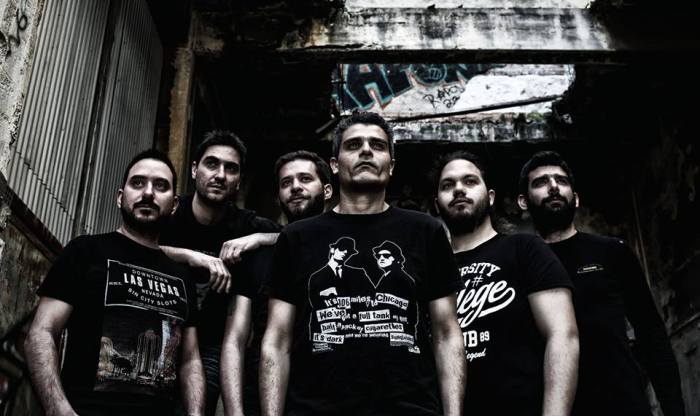 Turning a jumble of varied metal/rock styles into an unpredictable sound which eagerly romps in the ears and captures the imagination, Greek Hard Rockers One Year Delay make their full introduction with debut album Deep Breath. Offering seven songs which entwine flavours from nu and alternative metal with grunge and punk rock in rock ‘n’ roll also unafraid to embrace more classic/hard rock hues, the release is a roller coaster of invention and undulating but perpetual success.

One Year Delay began in early 2012, coming out of the Greek city Kalamata with a sound which through numerous line-ups, the current in place earlier this year, has evolved into the tapestry of adventure which potently marks Deep Breath. The album was recorded in 2014 with Toby Wright, the band travelling to the Sound Emporium Studios in Nashville to make it, with the release finally mastered by Andrew Mendelson. Unveiled through Pavement Entertainment, Deep Breath is an ear catching proposition fuelled with a potential suggesting a bright and for us all a rewarding horizon ahead of the sextet.

The album opens up with Gunpoint and badgering bursts of sound and energy which soon merge into a predatory stroll with intimidating riffs and threatening rhythms prowled by the instantly appealing vocals from Orestis Alimonos. As grooves spring their bait and intensity darkens, the song growls and lurches from one antagonistic twist and roar to another, but within this brews a melodic lure of clean vocals and keys seeded enterprise. The song has the unpredictability and imagination of a System Of A Down, if not the sound which is closer to the alternative metal prowess of Israeli band Onoma. Increasingly addictive the track gets the album off to a rousing start.

Headhunters steps up next and again riffs and beats make a potent invitation to which Alimonos once more adds vocal drama and energy backed by the equally strong tones of Steve Tsotras. Striding with an antagonistic swagger, the snarl and lure of the song is accentuated by short scything grooves and fiery sonic enticement through guitarists Nick Koumoundouros and Nick Trimandlilis, the former enticing with individual flames of hard rock enterprise across the metal bred proposal. A continuation of the riveting start to the release, the track makes way for the melodic rock meets groove metal triumph of Truth, Dare, Despair. The song dances on ears with a swirling web of riffs and rhythms, bait as much punk as it is metal and rock ‘n’ roll, to forge its own familiar but personal character; though imagining Drowning Pool meets Finger Eleven gives you an idea to another quickly persuasive encounter by One Year Delay

A sludgy air and gait comes with the following Water Under the Bridge, its slow movement and enticing croon stoner-esque but equally grunge coloured with a whiff of doom rapacity. Though not as immediate on ears and thoughts as its predecessors, or ultimately as dynamic, time allows the song to tempt and unveil intoxicating attributes which in turn gives a keen appetite for the album another reason to indulge often, the same applying to the Nirvana toned Miss You which takes over next. Its gentle voice and guitar entrance is a good welcome but it is when the song picks up its energy with the beats of Sotiris Papadeas a shuddering impact and the bass of George Manesiotis a highly agreeable heavy shadow that it comes into its own. Still the track lacks the same rich and inventive spark of earlier songs but satisfaction is nothing less than strong as it swings through ears.

The band is back spitting aggression with Try to Stay Alive but also entering a raw rap /groove metal crossover with warm rock melodies and Korn like boldness in ideas and unpredictability. It is a great adventure in idea which at times simply enthrals and thrills and in other moments loses its grip with unfulfilled promises, but again a want to hear it again is never far from thoughts after each venture into its potential.

For personal tastes the first half of Deep Breath easily outshines the second but as proven by the closing blues rock call of 5m, 9k, there is always plenty to seriously engage thoughts and have enjoyment fully on board. The last song is a potent weave of heavy riffs and provocative rhythms within scenery of spicy grooves and vocal tempting bringing the album to a rich and persuasive close.

You sense it is early creative days in the growth of One Year Delay but Deep Breath, as a first album, suggests things are definitely heading towards very exciting places. They are already there in many ways with their first full outing but when maturity and natural evolution comes to the fore too, keeping a close eye on One Year Delay might be a clever move.

Deep Breath is out now via Pavement Music through major online stores.

Like Loading...
‹ Zebras -The City Of Sun
EURO SLAYERS ATHENA’S WORD UNLEASH DEBUT EP AND PREPARE FOR A UK ATTACK! ›