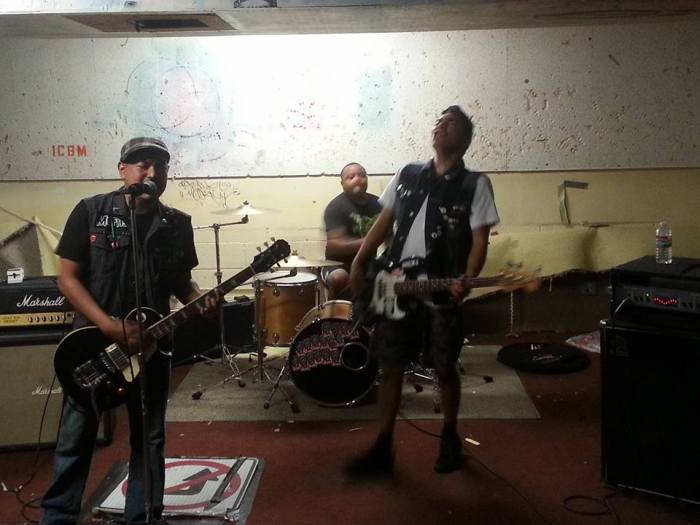 We had limited knowledge of Los Brigands up to this point in time but that is about to change and for a great many others no doubt, thanks to the might of their debut album Nothing’s Clean. Co-released with Crowd Control Media, the sixteen track stomp is an incendiary brawl of punk rock in its varied forms and devilry. It is quite simply rousing undiluted rock ‘n’ roll which just hits the sweet spot and can only push the band to greedier, broader spotlights hereon in.

Hailing from Los Angeles, the trio of vocalist/bassist Aroldo, guitarist/vocalist Hector, and drummer Keith have become one of the staples of the LA punk scene since forming in 2009. Inspirations come from the depths of hardcore but as their first full-length shows, the band is unafraid to add and twists things to embrace a host of distinctive styles and flavours within their songs. Back home they are a loyally supported outfit renowned for their high energy shows and catchy incitements of sound. Now with the unleashing of the sabre like charge of Nothing’s Clean, sixteen songs in thirty four minutes, Los Brigands look set to become a name on a much broader expanse of enthused lips.

The Haters’ Circle starts things off, the track a thickly enticing instrumental slice of psychobilly/punk which alone has body and emotions ignited and ready to feast, which they greedily do on its successor. Like Dead Kennedys meets Tiger Army, the opener brings its two minutes plus to the boil perfectly, making way for the similarly bred but hardcore driven 8 50. Hooks and rhythms are a hungry enticement whilst the vocals roar and brawl to match the addictive impact of the sound around them. For less than a minute and a half, the track incites ears and appetite, and for that same length whilst embracing familiar inspirations and essences, the punk rock passions are aflame, burning greedily for what is to follow. 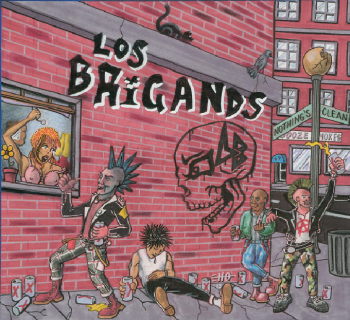 10 Times Worse is the first to step up with pulsating beats and a throbbing bassline aligned to ska bred enterprise. The song continues to swing along with infection lining its thick lures and chorus, its body an irresistible mix of UK band The Vox Dolomites and [Spunge] and leaving lips licked and a ripe want for more. The following Robbie does not provide more of the same flavour but is instead a highly agreeable Los Brigands take on Johnny B Goode which leaves rich satisfaction in its wake before the Spanish sung Algun Dia provides a Clash like stirring of ears and energy; its hard bounce another lifting the listener to feet amidst anthemic calls.

Things only get tastier as the belligerent ska brawl of Cold Cold City escapes the album next, it’s bruising attitude and prowess another spark to ignite the passions for the release with a success emulated and indeed eclipsed by the outstanding Dead American Dream. With a feisty tinge of street punk to its tempestuous swagger and defiance fuelled attitude, the song is as spiky as it is infectiously virulent whilst On The Wall straight after, dips into some raw pop punk revelry with a Rancid meets The Bouncing Souls proposition to outshine much around it as impressive though they all are.

The opening volley of beats from Keith straight away puts Downtown Nights on a pedestal to expect big things from, the swiftly rapacious riffs which swoop in not letting anyone down, or the snarling vocals and energy flooding the great confrontation. It is a raging force continuing in the excellent blaze of Fight Fire With Fire and true to form anthems come one after another within Nothing’s Clean but few incite participation as effortlessly as this excellent aggression.

As you will have guessed, variety across the album is rife and provides another colourful shade of adventure through the caustic ska romp of Broke, guitars and sax especially fruity against the growl of the vocals and the brooding bass tone cast by Aroldo. That fluid diversity creates another appealing contrast as the grouchy bellow of First 48 springs its contagious old school punk irreverence on the passions before it has to make way for Bumming Cigs and its bluesy rock ‘n’ roll canter which has all bouncing in their chairs, on their feet, and in the streets on personal experience.

Denver Ave has a feel of Russian punk rockers Biting Elbows to its more relaxed but spicy and increasingly agitated presence next, its magnetic tenacity and creative bait getting body and soul excited ready for Bad Vibes to exploit with its furious tempest of boisterous riffs alongside antagonistic rhythms, they bounding around another steely bass sound to get lusty over. It is the home straight on the album and both tracks are nothing less than impressive and addictive as they steer ears towards the finale that is Last One, a last bracing arousal of ears and enjoyment honed into a tangy and furious anthem.

Major surprises on Nothing’s Clean are not dramatic or regular but with a freshness and passion few bands can contemplate let alone match, Los Brigands has provided one of our favourite slabs of rock ‘n’ roll this year. After this the band deserves to be a big blip on all punk rock radars of fans and media alike.