Say hello to Armstrong, a quintet from Scotland who on the evidence of their new self-titled EP have the knack in writing some rousing slices of melody thick rock ‘n’ roll. The four track release is the back up to an eagerly received debut single unveiled this past August, a thicker confirmation of its success and broader bait to a national awareness of their rather flavoursome sound.

Hailing from Glasgow, Armstrong emerged in the December of 2014; the band taking time to hone their sound before uncaging their already renowned live presence from March this year. They have lured this description from someone somewhere, “Imagine Shirley Manson fronting We Are Scientists with exciting pop melodies“. You can see where those words come from as the EP’s four tracks incite ears and appetite, but it has to be said that more so Armstrong have already developed a unique nature and air to a sound which, yes has recognisable traits for sure but in a broad and undefined sense of other indie/alternative rock exploits. 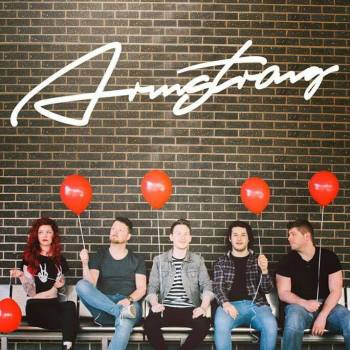 The release opens with that first single mentioned, Thursday Night Club. To a gentle but nagging tingle of guitar, the song is soon swinging jabbing beats before opening out into a fuller, richer stroll though it is still a relatively relaxed and calm on the senses proposition. Frustratingly not having names to give the individual prowess of the band’s members, the voice of the band’s front lady quickly captivates and impresses, her tones a balance of beauty and a deep rooted snarl which comes to the fore in the glorious chorus which subsequently erupts. Already the song was strong enticing but this fiery outburst turns the whole thing into a thrilling anthem, it in turn seeming to spark new enterprise in the steely dark tones of the bass and the melodic tenacity of the guitars. It is easy to see why the song made such a strong impact on its release, its instinctive power and wholesome energy alone ensuring the EP is off to a mighty start and indeed worth a strong look.

Just Cause steps up next, the second encounter with the EP immediate sonic smog with melodic tempting on ears which as the last song, continues to blossom and grow in creativity and infectious virulence. The native Glaswegian lilt of the vocals adds as much enjoyable colour and character to the song as the music, the impassioned tones cleverly wrapped in flowing sways of guitar and backed by the dark nature of the rhythms. Certain elements, as across all songs, hold familiar essences but as suggested previously, any comparisons are tinges of rather than thick similarities to another proposition and something you can expect to see evolved into more fresh originality as Armstrong evolve and mature as a band.

As the opener, Bend. Buckle. Break. also grows within ears from a slim and reserved breath, brewing up its own melodic seduction with every passing second led by the ever warm and alluring vocals. It too stirs up its own individual anthem of passion fuelled by a creative energy as ripe in rhythms as it is in the guitar tapestry and united vocal roars across the band. Generally more controlled and restrained even in its headier bellows compared to those songs around it, things still get evocatively and musically fiery before departing for the closing You Are Not Alone. The final track has a reserved tone which leads to another potent roar sizzling with melodic and vocal flames, it providing a highly pleasing end to a thoroughly enjoyable introduction to Armstrong.

As all female led melodic rock bands tend to be, Armstrong, will at times no doubt be compared to Paramore but Scotland’s new young guns already offer something very different and fresh in comparison which can only blossom with greater strengths of adventure. On this showing, they have a very rosy future ahead of them; it is just up to the five-piece to go grab it. They certainly seem to have all the potential and tools to achieve that.

The Armstrong EP is available from September 28th