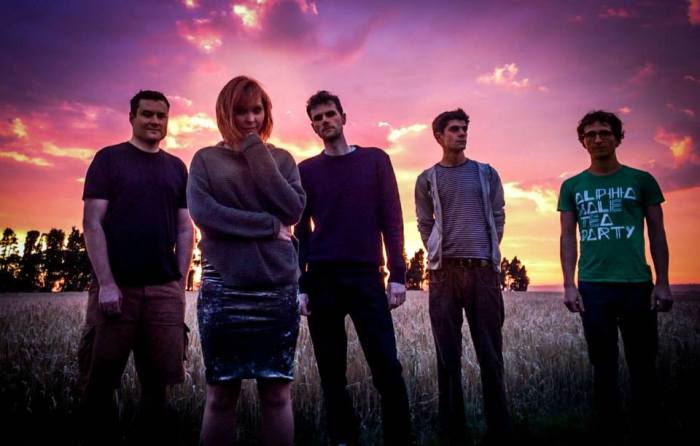 Continuing with their intent to write and record three separate releases in a year without the need of studios or labels, Alphabet Backwards now release their second in the tasty shape of the by Book About Foxes EP. It offers three songs which melodically smile as broadly as they physically captivate, tracks which continue the resourceful enterprise which marked its predecessor earlier this year, the excellent and acclaimed double A-sided single, Fingertips/Indian Summer. The EP is more of the same, fresh slices of warm creative adventure which individually explore their own unique magnetism and collectively leave ears and emotions engrossed. The British indie poppers certainly do not have sound which demands attention, or tone to their music which forcibly seizes the initiative between song and listener, yet as evidenced by Book About Foxes, it has a seductive mesmerism which is very hard to pull away from, that is if you would ever want to.

As with the last single, the Oxford quintet of Josh, Steph, Paul, Bob Tom, and James were again holed up in a remote part of Devon to create their new temptations. The EP’s songs were possibly written and recorded at Buckhouse Farm over the same intensive period of three weekends devoted only to making music which bred Fingertips/Indian Summer; either way it is obviously a process and endurance by the band which works as evidenced by the lure of the single and now the band’s EP, and no doubt to be confirmed by their third offering which is scheduled for March next year to mark and end the 365 day period and endeavour.

Book About Foxes opens with Trips and a tangy bassline which is soon joined by grinning percussion and just as bright vocals from the band. With guitars wrapping their tender and elegant weaves around that initial bait and ears, the song is quickly skipping through the imagination, enticing with every poetic melody and warm tone of those varied voices. It is a catchy encounter though it never slips its reins as you might expect, its revelry composed rather than tenacious but perpetually engaging, especially as keys bring their fresh adventure and creative drama to the fun.

The strong start is quickly backed and slightly eclipsed by Second Hand Smoke, a song swinging with a tasty dark bass groove from the off and the ever enticing union of vocals. Crystalline melodies and spicy new wave hues only add to the contagious character and festivity of the song, its slightly sultry air and resourceful creative swagger piling on more reasons that the EP is surely going to be greedily devoured.

Chris de Burgh brings the EP to a similarly enjoyable close, the song thankfully not the man himself, its melancholic tinge as poetic and alluring as the shimmering melodies and vocal expression shaping the increasingly fascinating and persuasive song. The track just enthrals and certainly rivals its predecessor as best song, especially with its delicious twinges of discord throughout .

It is a great end to another compelling offering from Alphabet Backwards; a band which creates folk kissed, melody drenched indie pop that simply leaves a warm glow in ears and emotions.

The Book About Foxes EP is out now!