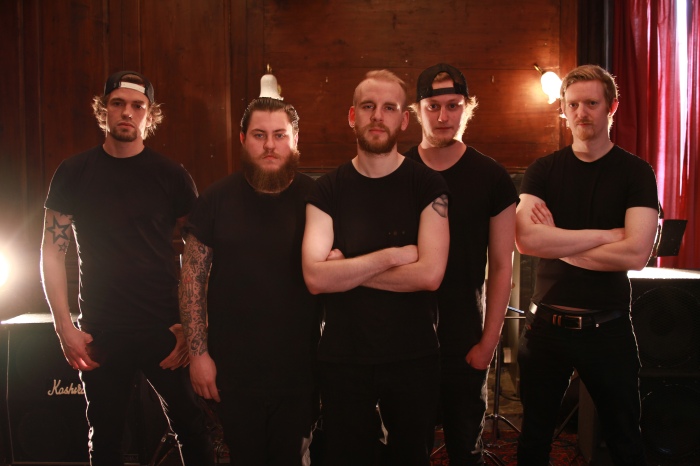 Starting off well and just getting creatively bigger and bolder over its six tempestuous tracks, the Crown Of Venom EP from metalcore quintet Koshiro, pretty much reflects the emergence of the British band. Making a good and potent impression with the first release, the band has continued to grow into a formidable proposition on the underground metal scene. Whether their new EP is enough to push them into the thicker glare of the broader metal scene time will tell, as it still suggests there is plenty more from the band to come in greater originality and ingenuity, but it will forcibly remind that the Bristol fury is around and getting stronger and more sonically vocal.

Formed in 2010, Koshiro quickly drew attention and loyal local support with their fierce yet melodically fiery sound. Their self-titled EP of 2012 and a handful of singles around and since it have nudged wider attention with plaudits increasing in turn, whilst live the band’s reputation has similarly only grown, shows with the likes of Feed the Rhino, TRC, Lower Than Atlantis, The Safety Fire, Blessthefall, Malefice, I, The Breather, and LIFERUINER part of their emergence over the years. Crown Of Venom though, is a new big step for the band; in songwriting and imagination it easily outshines all before and musically reveals the band as mentioned earlier, bigger, bolder, and creatively busier. In the words of vocalist Ben Errington, “These new songs are both the most chaotic and the most heartfelt we’ve ever put together. There are tracks on this record that I never thought we’d be capable of; we really wanted these songs to capture our live sound perfectly but take it to the next level, really expand upon our grand ideas which have progressed from our past singles ‘Malevolent’ and ‘Guts Guilt Greed”.

The EP was recorded with long-time collaborator Kevin Peters and opens with the thickly atmospheric, slightly portentous air of Green and Gold. Strings seep elegance and melancholy in equal measure whilst the ever strong tones of Errington share the emotive heart of the track as haunting keys cup his expressive voice with cinematic resonance. It is a potent coaxing into the release and the following King Of Snakes, if a start which does not light any particular fires outside of intrigue despite the prowess of all. Its successor quickly provides a bigger temptation, its initial breath Tricore like with again Errington providing rich bait as around him the guitars of Ben Bone and Thomas Clark begin sculpting a provocative and spiky weave of riffs, grooves, and sonic confrontation. The expected storm does not materialise despite ire and aggression lining all aspects, with the swiping beats of Craig Rudman especially intimidating and again the song does not hold the spark to get the blood raging through veins but with inventive enterprise and fine fluidity to its subtle and bigger twists of gait and ferocity, the song keeps ears and appetite easily on side, especially with its rousing anthemic calls, before being eclipsed by Necromancer.

As suggested, the EP improves and gets more fascinating with each subsequent track, and so as the first pair pleased, Necromancer stirs the senses like a landslide. From a dying heartbeat, the song erupts in barbarous rhythms and crushing riffs but amongst them a delicious scythe of violin ignites air and imagination, its wonderful touch just the first of ingenious hues and ideation within the carnivorous beast posing as a song. It would be hard to say it brings major originality but remembering others mixing up recognisable flavours as cleverly and tenaciously as Koshiro do is hard. The track continues to snarl and brawl with creative zeal but equally aligns the hostility with a striking melodic and vocal croon. In a way Crown Of Venom and indeed Koshiro seem to come of age at this point, a maturity continuing to impress hereon in.

Sleeper Cell steps up next with a rhythmic shuffle from Rudman which resonates through bone as it bewitches with infectiousness whilst bassist Rich Miller lures the darkest predacious tone from his strings as the guitars cast a tapestry of rancor and sonic romance. The ever riveting strings continue to spark adventure too whilst vocally Errington is as compelling, whether with raw squalls or clean persuasion, as the volatile furnace of sound and the musically driven bellow of emotion. The track is a climatic storm of temptation, and as its predecessor also ripe with the shoots of real originality which are definitely blooming within the band’s sound now, Creation Theory swift confirmation as between two vocal samples, which sound like they are voiced by Michael Caine, it sculpts a hellacious emprise of sound as physically carnal as it is evocatively suggestive. Like a war cry in many ways, the track has body and thoughts enflamed and ready to unleash their emotive strengths, a powerful success from a gladiatorial merger of devouring intensity and incendiary invention.

It is the pinnacle of the release, only relenting in its animosity as it departs for closing track Catharsis to begin spreading its melodic warmth with a slightly mercurial and antagonistic underbelly. It was up against it to match the previous trio of songs but still leaves the EP on a high whilst relishing the chance to reveal more of the depth and new diversity in the band’s sound and composing.

Actually there is one more offering upon Crown Of Venom, the bonus of a cover of Sia’s Chandelier. Though Koshiro easily improve the song it does nothing for the EP and quickly found itself ignored in our numerous listens of one increasingly impressive and enjoyable release.

Koshiro are again proving themselves to have the potential to make a big impact on the UK and European metal frontline, even more so this time around. They are probably still a couple of rungs short but with more progress as shown here, watch out world here they come.

The Crown Of Venom is available from September 25th through all stores.