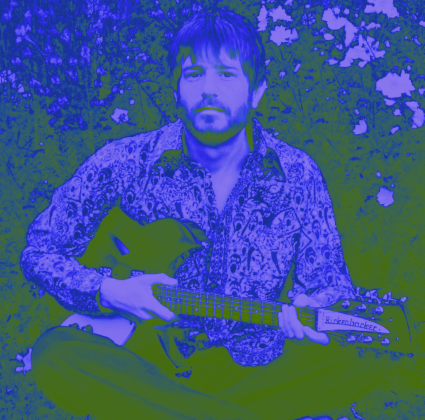 Looking for an escape from the turbulence of the modern world, from the grind and imposition life so often brings the day? UK artist The Virgance is one who provides such opportunity through his new album Paradigm 3, a celestial post-rock fuelled instrumental flight on the wings of shoegaze expanding through immersive ambiences which just suck you right in. Close your eyes and drift in thought and the album simply transports ears and mind to another fascinating and warm landscape, though it too has shadows to intrigue the imagination and stir the emotions. The release is a fascinating exploration, one which occasionally ebbs and flows in potency from time to time with personal tastes but one which from its first mesmeric note through to its final wash of atmospheric beauty, leaves a rousing glow in its wake.

The Virgance is the solo project of Colchester hailing Nathan Smith, former guitarist of UK indie band Ripley and the co-producer of electronica outfit Loveless. Early 2014 saw Smith emerge with his debut album Lost Continent, a release luring critical acclaim and eager awareness the way of The Virgance. Its successor in the January of this year only lured greater plaudits and attention, Hiko Shrine reinforcing the reputation and expansive nature of Smith’s composing and sound which Paradigm 3 now explores to richer success.

From opener 25 Years ears are entranced and the imagination ignited by the almost ravenous kaleidoscope of sound and textures slowly and magnetically swamping the senses. The guitar craft and enterprise of Smith is as lively and enthralling as the ambiences and beauty oozing from the keys, and equally the darker hues and character of drums and a bass which at times are virtually stalking the psyche from within the sonic drenching of track and air. For us the best instrumentals, even within an open theme or inescapable atmospheric suggestiveness making major hints on the imagination, are those allowing thoughts to conjure new and different exploits with each and every listen and certainly that is the case with Paradigm 3 and each individual emprise of sound and invention.

Through both the rockier Epiphony and the haunting Sequester Smith ‘traps’ the listener in a cloud of sonic seduction and less prominent but equally alluring rhythmic contrasts. The first of the two pieces blossoms with its great subtle repetition within an absorbingly crafted sonic journey whilst the second is like an evolving spatial mist, an enthralling brewing of slightly sinister tinged intensity in sound emerging within noir toned drama.

From one big highlight to another and the more minimalistic and earthbound Moonolog. A simple union of bass and guitar alone has ears gripped and thoughts involved whilst around them a tension slowly but clearly grows in the lining and atmosphere of the track. Calm and warm sonic caresses ultimately keep any volatility at bay but the hints are there to ensure the track continues to dispel expectations and predictability.

There is a great raw edge, and at times thicker expulsions, within Paradigm 3; another underlying constant which chooses its moments to temper the universal flight and fiery elegance within the likes of the senses smothering Saturnine which embraces controlled causticity to fine effect. In contrast, Down The River leaves rougher traits under wraps as its siren-esque swelter and ethereal vocal bewitchment, courtesy of Shauna McLarnon of dream pop duo Ummagma, swallow ears and emotions. The first single from the album, it sparks thoughts of new worlds and old civilizations but again terrains with fresh scenery every listen.

The album is completed by firstly Dissipate, a brief and fiercely potent stretch of sound and imagination which is as strangely harrowing as it is mystically compelling and finally No Return, itself a darker and seemingly harsher environment initially, but emerging like a celestial butterfly shredding warm resonance with every melodic flutter, though again darker elements bring an extra resourceful slither of intrigue.

Paradigm 3 is spellbinding, an exploration you will only be glad you have not missed. It is best heard in one full odyssey of sound and stimulation though admittedly that does run the risk, if not paying attention, of tracks merging into one and another and losing some of their defining features. However you embrace the album though, it is a proposition that shoegaze and post rock fans especially will find great rewards in.

Paradigm 3 is out now on CD through El Vals del Conejo and as name your price download via The Virgance Bandcamp.