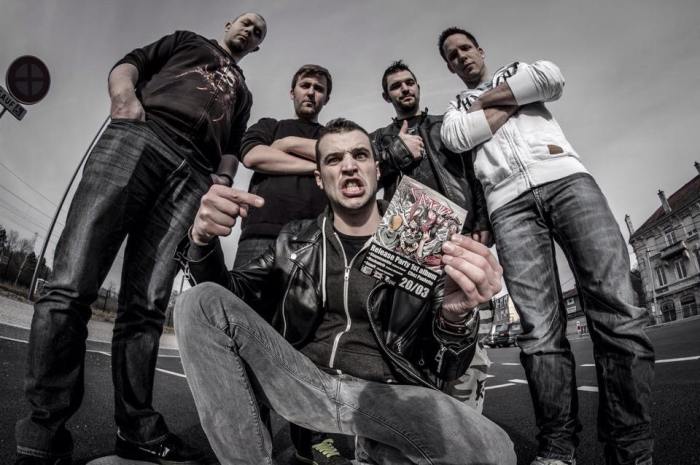 Though there is an old school breeding to their sound, as debut album Wise Man Is Dead shows whilst storming the barricades, equally French thrashers Warfaith infuse just as potent twists of modern and varied ideation into its ferocious character. It brings a wonderful blend of raw and inventive thrash metal drawing on its various decades, and though the release is definitely recognisably schooled in the genre’s breeding days, it replaces major originality with inventive and fiercely enjoyable rock ‘n’ roll.

Formed in 2012, its origins seeded in many bands such as Violator or Warfare before then, the Nancy quintet quickly sparked their local scene into supporting life with their live presence and their first pair of tracks in Terrorist and Spit on the Cross. The following year saw the recording and release of the Blood And War EP; six tracks released that October helping to enable the band to venture further afield within the metal underground. Now it is the turn of first album Wise Man Is Dead, a release sure to light up ears for thrash around its birth but with plenty to please all of its fans even without stirring up particularly new pastures for the genre. 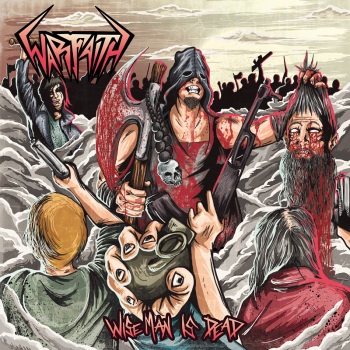 Influences to Warfaith include the likes of Slayer, Soulfly, Sepultura, Cannibal Corpse, Scar Symmetry, and Pantera, and that hints at more going on than just a vintage thrash incitement as the opening pair of full tracks to Wise Man Is Dead confirm after the sonically enticing Intro. It’s melodically acidic and accomplished coaxing leads into the album’s title track door, it exploding with ravenous rhythms and vocals across a scourge of violent riffs and instantly infectious incitement. The hellacious onslaught relaxes a slither as the track hits is barbarous stroll, the bass of Moon a great steely lure within the sonic web cast by guitarists Jojo and Odian. Driven on by the full roar of vocalist Max and the vicious swings of drummer Igor, the song continually shifts in gait and intensity, enterprise and maliciousness without even lessening its fury before Jesus Sucks erupts with irritable sinews forging antagonistic rhythms within another richly flavoursome weave of enticing grooves and imposing riffs; it all hostile and all thoroughly enjoyable.

Max brings a punkish element to his tones on the track which seems to spark the same in the sounds of Crack’s Whore straight after, the track a tempest which has a thick hardcore whisper to its torrential nagging of bestial riffs and bass grouchiness, and indeed the increasingly raging vocals which also slips in to spoken delivery with the same ire in tow within the attack. Once more the guitars unveil sonic and melodic slithers but primarily the song is a rancorous squall to light the soul, only relenting when it has to make way for the spicily hook loaded revelry of Purgatory. As in its predecessors, twists constantly bring a familiar air but with inventive freshness to the ear, and indeed contagion, which just hits the spot and the want from any thrash fuelled offering.

Terrorist keeps the good times boiling in the system, blood inflamed by the rabid tempest thrust through ears and the vocal union between Max and guest Nico Xanort; their contrasting tones of spite and ferocity a union as enjoyable as the spiralling invention from the guitars and rip-roaring tenacity of the song as a destructive whole. It is a brutal anthem impossible not to enlist in as equally the even more caustically abrasing Furious Pig, and after it, the merciless Kill With Truth. In their joint uncompromising extreme metal turbulence, inviting hooks and sonic endeavour bring individual adventure against the dark hearted aligning of senses battering and inventive drums and an addictive bass tempting, especially in the second of the pair which is a beast of virulent violence and temptation and arguably the most unique and exploratory song on the release, even in its tsunami of maliciousness.

There is no let-up to the musical and lyrical vehemence with Warslave, the track a horde like surge of rancorous bass bait and insatiable riffs pushed on by the great punkish squalls of Max, or Addiction right after. It devours ears like a war machine, pressing on with relentless authority whilst spewing flames of catchy enterprise and impassioned incitement lyrically and emotionally. The song is glorious and once again it has to be said the bass of Moon is wonderfully demonic in its voice and delicious in its growling texture, as shown one final time in the closing Redemption. It is actually the most predictable and thus less impacting song on the album but still brings Wise Man Is Dead to a mightily pleasing close.

It has to be said that Warfaith had us held in the first listen but the hooks only went deeper with ever subsequent listen. Wise Man Is Dead is definitely a release which just gets richer and bolder with every encounter so do give it the time it deserves; you will be rewarded.

Wise Man Is Dead is out now via most online stores.