Warm hearted and tenaciously welcoming, the sound of Scottish band The Jackals just leaves you with a smile on the face and across the emotions. Its potency is richly apparent in the band’s new album People, eleven tracks of melodic and soulful sunshine which may not ignite a riot in the passions but lingers with captivating tempting for the same kind of success. At times it serenades with smouldering radiance and in other moments has feet and hips in festive mood; in the words of the band, it is cosmic rock ‘n’ roll.

Edinburgh bred, The Jackals quickly earned a reputation for blistering live performances and songs combining “cryptic lyrics with expansive guitars, underpinned with the solid grooves of the bass and drums.” Their double A-sided single Holding All The Roses/L.E.A.R.N of last year was the spark which really began luring greater and broader attention the way of the band. Recorded with legendary producer Owen Morris (Oasis, The Verve), who returns for the new album too, the release was a highly appetising forerunner to People, which in turn provides a full meal of pleasure. 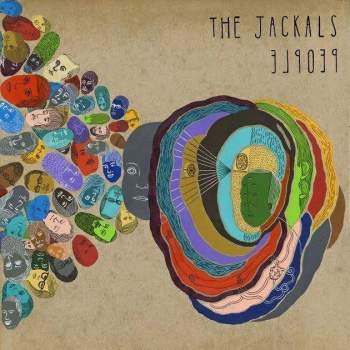 From opening track Eyes Awaken, the album is awash with a fusion of psych and surf rock soaked in sixties pop essences. That is of course simplifying their sound as at times it is as much folk toned as it is indie rock as it is all the flavours mentioned combined. It is an engaging mix which can catch fire in a boisterous revelry or just caress the senses with warm temptation and as the first song shows is highly persuasive. Eyes Awaken gently strokes ears initially, crystalline melodies from keys aligning with a similarly glowing kiss of guitar as they await the mellow vocal tones of Scott Watson. His and Gary Quilietti’s guitars continue to entice as darker rhythms begin flirting with thoughts and strings cast slithers of melancholy. Eventually a livelier energy escapes as the catchy chorus looms from where, like waves lapping on ears, all the ingredients of sound and invention entwine to fascinate and seduce. As a few songs on the album, it was not a swift persuasion but grows with every listen into a rich tonic of feel good enterprise within a sweltering psych rock ambience.

The following Raspberry Moon similarly makes its entrance with a slow kiss on ears, those emotive strings returning to compelling effect as skittish beats from Paddy McMaster begin to find their and the listener’s feet. In no time the song is cantering along with a country twang and folkish air reminiscent of Irish band Raglans. We cannot say the inspirations sparking The Jackals’ musical endeavours but it is easy to suspect from the second track alone that possibly The Beatles are amongst them and maybe Scottish bands like Orange Juice and Aztec Camera too.

United band vocals open up Call Out Mellobird next as ears are entangled in melodic enticement from the guitars and flirted with by the darker tones cast by bassist David Panton. It is a magnetic affair equipped with a soulful smile and web of alluring melodies that along with boisterous beats set up ears for the outstanding Ghost Soul Traffic. Straight away the tangy sixties groove escaping the guitar has lips licked, its surf rock breeding and early sixties tone reminding of bands like The Ventures is bewitching and just as alluringly backed by a matching nostalgic climate of harmonies and acoustic riffs. Hips and feet are quickly under the song’s spell whilst an early contented appetite gets hungrier for more which it gets in the equally seducing Can’t Leave the City and its gentle sway within another instinctively melancholic but refreshing atmosphere. Once more a vintage melodic wine runs through the host o spicy grooves and hooks slipping easily from the guitar and again ears and imagination are engrossed.

Just To Pass The Pleasant Time strolls along with a mix of folk and sixties psych pop after whilst Dancin’ Round The Nails explores a thick emotionally textured landscape, its croon reflective and a touch sombre but with a liveliness which gives it an edge and potency. Both songs satisfy without matching those before them, each joining the list of tracks which just grow and become more tempting over time, something definitely not applying to Two Heads. The track instantly has ears alive with its opening bait of hooks and harmonic vocals, they leading to an alluring jangle and rhythmic shuffle which just lights the passions. Bass and guitars continue to weave their infectious and almost teasing enterprise as beats and voice dance with feet and imagination respectively as the emotions are taken on a feistily feel-good ride from start to finish by almost four minutes of joy.

The more humid air and emotive croon of Where the Face of Angels Lay takes over from the best track on the album next, its smooth balladry emulated but then taken into more intimate and cosmopolitan scenery by Gold Gift from Paris straight after, it’s Hammond seeded kisses additionally pleasing hues in its exotically toned flight of sound. Both songs join those taking time to reveal their full character and persuasion but only impressing with every listen and always setting up the rousing merger of country rock, folk, and indie pop that is Waiting On The Man With the Sun perfectly. The track brings those rich essences into a spicy and addictively boisterous dance with the masterful rhythms of McMaster stealing the show in a glorious anthemic tirade of incitement midway.

Closing song Dust is drenched in psychedelic mystique and low key but open funk grooving for a pulsating smog like rhapsody of sonic and melodic imagination laying on the senses as its title might suggests. It is a fine end to a thoroughly enjoyable release, an encounter which seems to get more absorbing and headier with every passing listen. It is easy to see why there is a fuss brewing around The Jackals, a band which will be surely only creating bigger and bolder things ahead.

People is available from September 14th digitally and on vinyl with an additional cassette release through Burger Records.