Home › Interviews › From the metal bred heart of Italy: Avoral

From the metal bred heart of Italy: Avoral

Earlier this year, Underground Metal Alliance released their 2015 compilation of the best independent and striking band from the Italian metal scene. It was an impressive encounter insight to the underground scene in Italy and introduction to a host of imagination and invention fuelled bands. Once such proposition was Milan based epic metallers Avoral, a quintet creating a sound as inciting for ears as it is for the imagination. The first of a series of interviews we caught up with bassist Bolthorn from the band to explore its origins, debut album, and being part of the thrilling compilation from UMA.

Hello Bolthorn, thanks for talking with us.

As an introduction can you give us some background you all and how the band came together?

Hi to you and thanx for your interest!

Avoral were born in 2012, after many circumstances and line-up changes, from the merger of previous power-epic metal projects with Ged (lead guitar), Legion (rhythm guitar) and Frank (vocals) and the meeting with Bolthorn (bass) and Nurgan (drums) who came from a symphonic black metal project.

In 2014 we signed with Club Inferno, a division of My Kingdom Music, historical Italian label, and released our first full length album War Is Not Over

For newcomers can you provide a break-down of your diverse sound?

We play a particular kind of epic metal, atmospheric and structured but also hinted with other influences and elements coming from other genres, like Viking and black metal, prog, thrash… We let our minds and inspiration fly free on the instruments, not limiting it to the classic clichés of one certain style.

It’s kind of a combination of fast rhythms, atmospheric parts, violent riffs and ballads, all conveyed to an unique musical aim 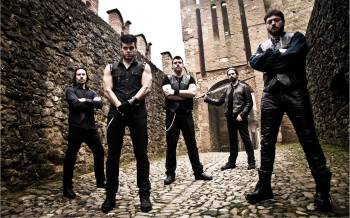 What are the primary inspirations for the band and you as musicians?

We actually listen to a very large range of musical proposals, from Viking and black scene, to prog, folk, gothic, power and epic… Of course we all love Blind Guardian and all that stream, but as said we don’t want to limit ourselves in a unique direction. We just want to be Avoral

You are part of the impressive line-up on the new UMA compilation album. How did you get to be involved with the release?

We already knew UMA before this compilation, we worked with them for other releases and events, but surely when they proposed us to be part of the competition for the UMA Compilation this sounded very interesting to us, for many reasons. The wide and very heterogeneous audience, the way UMA works, the possibility to be involved in a release with other very good bands we also know musically and personally… In other words, we are very happy to be part of it, it is moving quite well in Italy and also outside the national confines.

I assume the choice of song for this kind of release is never an easy decision. What was the reason or spark in choosing the song which features on the release?

It was not an easy choice, actually. The title track of the album is the first song we officially released back in 2014 and it gained many positive reviews and views on the audio streaming sites, therefore this was surely a good way to increase its exposure, but there were also other songs we were considering, like Journey to the Glory (heavier but also dreaming) or I’ll Rise Again (more structured and epic). Anyway, listeners and reviewers who still did not know it liked War Is Not Over and it gave us the possibility to be found out by new people, so we’ re happy with our final choice

With some bands there might be the urge to pick an easy ear friendly option in song to lure new listeners in the kind of opportunity the compilation offered, but I sense, as with all involved on the album, that you went for something which showed the depth and richly varied textures in your music?

Definitely! We’ re not interested in making “easy” music for people to like it, nor any other easy choice to lure higher audience. Of course there is some more relaxed part on the album, but we have a lot of structured and complex parts in our music and decided to show ourselves in a way that could represent its variety as much as possible. Our ideal listeners have to be open minded and not searching for the typical epic metal song/album, if you know what I mean!

Tell us about your current release which people might like to explore off the back of the compilation.

As you said, War Is Not Over has many varied textures within its songs. It is a concept album and then it narrates different contexts and episodes of the story, therefore it is needed for every song to have its own features and backgrounds, from heavy to theatrical, calm, progressive… For this and other reasons we decided to have some special guest on the album: Maurizio Cardullo (Folkstone) at bagpipes and flutes, Laura Brancorsini (ex Furor Gallico, The Clan) at the violins, Simone Malan (Henderwyd) at the cello, and Davide Valerini (Obsolete Theory) at the hardcore vocals; the guys made an impressive work and it’s been a great pleasure to work with them!

How as a band does the songwriting generally come about?

Story comes first of all. This means that in our concept we all know how the events are flowing and which consequences they will have, so the music has to represent this at its best. Of course we do not meet in our rehearsals room and mechanically say “ok, new chapter will be this so tonight we will compose heavy stuff, while tomorrow slow” and so on, but we convey our music in the direction the story is taking.

Ged usually comes out with the first riffs of a new song, but the process is totally collaborative and everyone can propose new parts or modifications. There is no limit, no boundaries for us, we just let our inspiration flow free

What inspired the lyrical side of your songs and indeed War Is Not Over?

As a concept album, lyrics are all focused on a certain story, close to the epic and fantasy literature (also the moniker “Avoral” comes from that). Metaphorically, it is like a trip through the life of our character with all its vicissitudes and problems, struggling to find a balance to his internal war between good and evil that, as the title says, unlikely will find an end

The compilation suggests that Italian underground metal is on a creative and inventive high right now. How do you find it on the inside and how hard is it for emerging bands to make any headway in attracting attention there?

Emergent metal music in Italy is living a sort of “new era”. While some year ago, most of the bands here used to play the same genres (mostly thrash and death metal) not searching for a real originality in their proposals, in the last couple of years I’ve discovered a great number of bands composing really good and “fresh” music, trying to go beyond the limits and the borders with quite interesting experimentations.

On the other side, problem is that there is a huge number of active bands and together (most of all) with venues and promoters looking for the easiest choice to fill up the clubs on one hand and financial difficulties on the other hand, it is difficult to emerge and you have to work a lot on every aspect of the band, from live shows, to the communication, and image, and so on. Surely if you let it all discourage you easily, it gets harder to have a real chance

What is on the near horizon for the band?

We are now working on the sequel of WINO, so far we have composed a couple of new songs, focused on heavier and more progressive elements. Soon we will also get back on the stages after a little break, plus some other interesting news we will reveal you at the right time!

Thanks to you for the room you gave us! We invite you all to have a look at our pages (Facebook, YouTube, Spotify and so on) and give a listen to our music, hoping to find you at some live show for some –always appreciated- good beer all together!

Lastly give the readers, as a music fan rather than a musician, reasons why they should treat themselves to the UMA album.

I really recommend it. Never forget the importance of emergent bands and compilations, you could find one of your future favourite bands! And UMA Compilation is really good.

Read our review of the UMA Compilation @ https://ringmasterreviewintroduces.wordpress.com/2015/06/24/uma-compilation-2015/